Who are these guys?

Who are these four ersatz Watergate plumbers who tried to bug Sen. Landrieu's phones?
And which is the biggest tool?

First there's James O'Keefe. It's pretty hard to be a bigger bag of douche than James O'Keefe. For one thing, this was his statement after posting bail:

O'Keefe on Tuesday told reporters "veritas" -- Latin for "truth" -- when he was released from jail. Later, he shouted "The truth shall set me free." (NOLA.COM)
Then he sent out this "tweet"

I know, it's just shocking that you got caught, what with you being such the master of disguise. I know when I saw you in your pimp get-up, I immediately thought, Oh my God, that there's an honest-to-Gosh-darn flesh peddler that is.

Or an extra from Doctor Detroit. 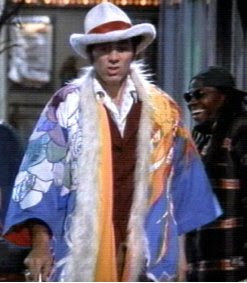 So you were able to fool some of the folks at ACORN, so you figured what the hell, security at a United States Senator's office should be just as gullible?

On a side note, people need to stop referring to O'Keefe as a "conservative filmmaker." He records pranks on a fucking cell phone. Check YouTube, there are about a million drunk frat boys doing the same thing and none of them gets the title of "filmmaker." Woody Allen is a filmmaker. Martin Scorsese is a filmmaker. James O'Keefe is just some guy with a cell phone and a distinct lack of character.

So who else was involved in this brilliant caper?

This is one Stan Dai. Stan is most well known for, well actually he isn't well-known for anything, or wasn't before the incident, but he did write this:

It was published in a student newspaper at George Washington University. Really.

I'm not going to reprint it here, because, unlike GWU, I have certain standards! But let me just say that the essay includes these headings:

I don't know what a "cookie snorcher" is, but the story under that heading involves an netity named Joan who is a "five foot tall vagina with a black plasyic wig on her head."

And the rest of the diatribe is about as misogynistic as that might lead you to expect. Also stupid. And poorly written. If you want to see just how awful it is, click here, but don't say I didn't warn you.

Also, there's Joe Basel, who is apparently dating one of Scott Brown's daughters

Which, I guess, you can't really hold against him.

And then there's Bob Flanagan, about whom the AP says only:

The fourth man, Robert Flanagan, 24, wrote for the blog of the New Orleans-based conservative Pelican Institute.

(just for fun, do a google search foe "Bob Flanagan." No wait, don't!)

Posted by Professor Chaos at 4:57 PM 2 comments: Links to this post