You know what we haven't done in a while?
We haven't played "Who's Stupider?" 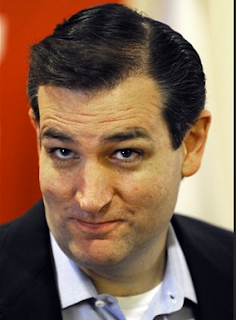 Ted hails from Canada, where he likes being a delusional asshole and mis-understanding children's books.

Ted, what do ya got for us today? The level of ignorance, actual or feigned, in this this statement is really stunning. Contestant # 2 has his work cut out for him.


Lindsay hails from one of the Carolinas ( the bad one) where his hobbies include thinking up new countries that need invading and being totally, completely a heterosexual woman-loving macho man!

Lindsey? Have at it!

Hmm, okay. That's a lot of projection, coming from one of the chief crybabies of the Congressional tantrum caucus, but you're going to need a bit more stupid to beat Ted Cruz.

He [Obama]'s completely tone deaf as to the results of this election. Even those who didn't vote Mr. President are polled about your policies. They don't like them any more than the people who did vote. So if he goes it alone on immigration I think not only will it poison the well but there will be a backlash against him that will flow over on Democrats yet again.

Dang!  Pretending that the well hasn't been poisoned over and over again by you and your Republican colleagues? And pretending that the people who stayed home on election day caount as votes for your side? I don't know, that just seems more dishonest than stupid.

GRAHAM: Well, we've got a lot of bills that came from the House to the Senate with bipartisan support from the House that died in the Senate, the Keystone pipeline. I want to take the defense cuts under sequestration which will gut our military and replace them with something more balanced. There are so many areas out there that we could work together.


Okay, pretending that defense cuts would "gut" the largest, most bloated military the world has ever seen? Now that's pretty stupid! But pretending that there is the slightest possibility of Republicans being willing to work with the President? I believe we have a tie!

And this tie can only be broken American Idol style, by audience voting. Leave your votes in the comments!
Posted by Professor Chaos at 8:12 PM 6 comments:

They finally found some voter fraud!

They finally found the reprehensible felon responsible for defrauding the American electoral system!

And it's this lady:

You see, this nice lady went down to the election place and registered to vote and then actually voted even though, unbeknownst to her, she was not actually allowed to do those things. Which might not sound like all that serious a crime, but. . .

Two months after I cast my ballot as a civics lesson for my daughter, the Iowa Department of Criminal Investigation agents parked across the street from my house, questioned me, and eventually arrested me and charged me with voter fraud.


Which carries a sentence of up to FIFTEEN YEARS!

Of course, all of this horribly fraudulent fraud could have been prevented if only Iowa has a voter ID law. . . oh, wait. . .
They do.

Oh, and the reason she doesn't get to vote? Let her explain:

Let me explain: When I was convicted on a nonviolent drug charge in 2008, my defense attorney told me that once I served my probation, I would regain my right to vote automatically – correct information at the time. But Gov. Terry Branstad suddenly changed the rules in 2011, and now all citizens with a felony conviction lose their voting rights for life.


Now, I'm no legal expert, but how is that not an ex post facto law? Shouldn't that only apply to people convicted after 2011? Any lawyers out there want to enlighten me?

Anyway, it's reassuring to see that the right-wing wasn't just being total dicks about voting. They actually were protecting our democracy from an actual, serious threat.