The Worst Slogan Ever

The worst slogan ever in the history of slogans anywhere in the world ever:

I don't even have a joke here. I have nothing to say except I miss Mr. Whipple. I miss the days when toilet paper companies just assumed that we knew what their product was for and didn't need to discuss it. It feels soft against your face. No need to mention what else it might feel soft against.
Charmin was already on my enemies list for their obnoxious bear in the woods ads. 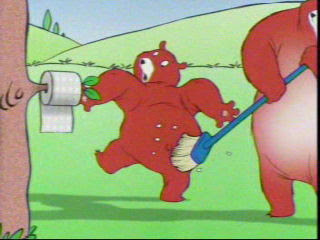 Do we really need to be subjected to cartoon bears with bits of tissue stuck to their hinders shaking their tushies in our face to sell us Charmin? (hint: no.)
But now they've really gone over the edge. Look at their new web presence:

Welcome to the playful side of TP. Where we believe going to the bathroom is a thing to enjoy — even celebrate.

If our Bears don’t do the trick,
check out this video to learn more about Enjoy the Go.
Roll the clip

Yes, I'd love to read random people describing their experience with Charmin toilet paper! Don't leave out any details!
Posted by Professor Chaos at 10:38 PM 2 comments:

Did you see the Awards?

No, not the Oscars. Who cares about the Oscars? The important awards are the Rotten Banana Awards given out by Wing Nut Daily.

Why rotten banana? I guess because Rotten Tomatoes was already taken?


“These rotten films have been chosen not necessarily because they have sex, violence, nudity, or profanity, but because they have a worldview antithetical to the biblical worldview. They communicate philosophies that, in the final analysis, are anti-human and anti-God and that can only lead to disaster.”

Anyway, the awards are given out in categories like:


The Vile, Vulgar, and Anti-Christian Award, which this year goes to Kevin Smith's Red State.

I have not seen this movie, nor was I aware of its existence, but if it's a Kevin Smith film, it's a pretty good bet that it's vulgar. Vile? Anti-Christian? I can't say, so I'll just go ahead and assume that they hit this one right on the head.

The Slimy Pornification Award, given to the movie with the "worst promotion of pornography." Now, I would have assumed that this onewould be a thousand-way tie between every pornographic film made this year, but in a stunning upset, the award goes to Bucky Larson: Born to be a Star.

Because nothing promotes pornography better than Nick Swardson acting like a retarded person!

The Lying About the Police Award goes to the Woody Harrelson vehicle Ramparts because the Ramparts scandal in the LAPD totally wasn't an actual historical event which really happened in the real world and the filmmakers just made up all this stuff about LA having some corrupt cops. Or, as WND puts it: "Worst politically correct police portrayal."

I'm not sure how portraying a corrupt violent cop is "politically correct." As I understand it, "Political correctness" is supposed to be the practice of avoiding offense, but whatever.
This year's Ludicrous Lying about Shakespeare and Queen Elizabeth Award, given to the film with the "Worst Artistic Revisionist History," goes to Anonymous. No?
I'm not sure what the lie is, but considering that no one knows anything about Shakespeare, including whether or not he was a real person or just someone's nom de plume, it would be pretty hard to prove that anything said about him was a lie. But why let that stop you, this is Wing Nut Daily, not the frickin' true things club.

Apparently, even though it is incredibly unlikely that some uneducated actor penned the greatest works of English Literature, it is "Anti-human and anti-God" to not pretend that he did?
The Left Wing Attack Award goes to J. Edgar, for its "Worst Scurrilous Portrayal of a Historical Figure." because apparently, there is a positive way in which to portray J. Edgar Hoover?

Well, he did protect us from the threat of John Lennon!
Then there's the Satanic Witchcraft Enticement Award, given to Paranormal Activity 3.

Which won by being the "Worst Movie Leading Children to the Occult." Because what better way to get children interested in the Occult than by scaring them to death? By showing them scary occult stuff? It's foolproof!


And my favorite award, the Lewd Sendup of Heroic Fantasy Award, which was given to the film Your Highness.

Of course, it's not just the award itself that's so great, it's the reason for winning. Your Highness won the award, because it contains "the Worst Stoner Mockery of Quests."


Quests! You know, you can get away with mocking a lot of things. You can mock Uncle Sam, the Baby Jesus, True love, but I'll be goddamned if you're going to mock quests on my watch! Quests are sacred, you assholes!

I can't vouch for any of the awards, as I haven't seen any of these movies. I would bet money, though that they haven't seen them either. If for no other reason than that they couldn't possibly afford the ammount of money it would take to get someone to sit through Bucky Larson, Your Highness, and Happy Feet 2.
Posted by Professor Chaos at 8:50 PM 1 comment: