Oh, JEB. You're so pathetic. If you're going to use an offensive term like "anchor babies," just fucking own it. Don't try to back-pedal. Mostly because you're even worse at backpedaling than you are at forward-pedaling. 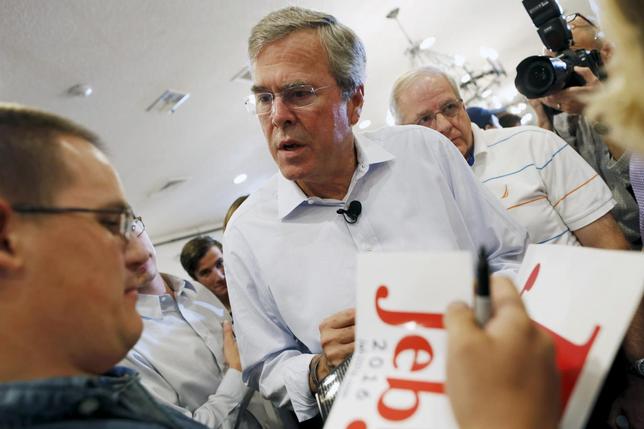 Have you ever seen a picture of this guy where he doesn't look like he's saying "hunh?'

"My background, my life, the fact that I'm immersed in the immigrant experience, this is ludicrous for the Clinton campaign and others to suggest that somehow I'm using a derogatory term," said Bush, whose wife was born in Mexico and who answered some questions in Spanish, "What I was talking about was the specific case of fraud being committed where there's organized efforts - frankly it's more related to Asian people coming into our country, having children in that organized effort, taking advantage of a noble concept, which is birthright citizenship," he said.

Of course, JEB wasn't the only one to weigh in on this non-issue:

Immigration experts: Jeb Bush had a point on anchor babies

Not that that's going to stop Republicans from trying to use it as their newest racist bogeyman.

Republican presidential candidate and Louisiana Gov. Bobby Jindal (R) told Fox News on Thursday that he's "happy to use" the term "anchor babies" to describe children who were born to noncitizen mothers and granted citizenship by birthright.


Oh, sure. Like you mean someone whose parents were here on student visas and had a baby who was granted US citizenship due to his having been born on US soil, even though neither of his parents were Americans or even permanent residents? Like, say, oh, I don't know. . . you?


You know,  outreach to Hispanics really involves more than just saying "we're reaching out to Hispanics."
Same goes for outreach to women.
Fortunately, it doesn't look like Republicans are going to learn either lesson anytime soon.