I expect better from Mother Jones

I've seen Kevin Drum's stuff from time to time on the MoJo blog. I don't read him religiously because reading is hard and takes effort, but I'm familiar enough with him to be very disappointed with this little gem:

Let's Be Careful With the "White Supremacy" Label

I was listening in on a listserv conversation the other day, and someone asked how and when it became fashionable to use the term "white supremacy" as a substitute for ordinary racism. Good question. I don't know the answer, but my guess is that it started with Ta-Nehisi Coates, who began using it frequently a little while ago. Anyone have a better idea?


Yes! Everyone! Everyone has a better idea! It's not like Ta-Hehisi Coates invented the term. White supremacy and racism are practically synonymous terms.

For what it's worth, this is a terrible fad


Fad? A terrible FAD? Do you even know what a fad is?

Streaking was a terrible fad. 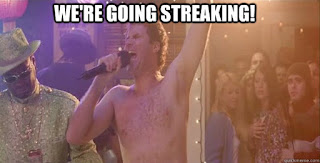 Saggy pants is a terrible fad. Planking was a terrible fad.

Calling out white supremacists is not a "fad."

For what it's worth, this is a terrible fad. With the exception of actual neo-Nazis and a few others, there isn't anyone in America who's trying to promote the idea that whites are inherently superior to blacks or Latinos.

Or the comment section on pretty much any news story online?


Conversely, there are loads of Americans who display signs of overt racism—or unconscious bias or racial insensitivity or resentment over loss of status—in varying degrees.

Is these examples of racism, bias, or insensitivity?

Is portraying our president as a primate just racism? Is it not strongly implying that black people are in some way more similar to apes and therefore less human than white people? How is that not white supremacy? Where exactly do you draw the line? Where does "bias" or "overt racism" end and white supremacism begin?  You're really just being pedantic, aren't you?


This isn't just pedantic. It matters. It's bad enough that liberals toss around charges of racism with more abandon than we should, but it's far worse if we start calling every sign of racial animus—big or small, accidental or deliberate—white supremacy. I can hardly imagine a better way of proving to the non-liberal community that we're all a bunch of out-of-touch nutbars who are going to label everyone and everything we don't like as racist.


Okay. If that were actually happening, you might have a point. If every time someone confused Chris Tucker with Dave Chapelle they were accused of being a white supremacist, that would be going too far. But A) I really haven't seen that happening, and B) if you start worrying about what the FOX and Limbaugh crowd think of you, the battle is already lost. Because if you're not one of them, they are already incurably convinced that you are an America-hating, anti-Christian tool of the gay agenda and being judicious with charges of racism isn't going to change their minds one bit.

And I really don't think anyone is saying any of those things.

Let's jump back to the beginning of this article for the Bernie Snders story he's referring to. Someone named Nancy LeTourneau was critical of a statement Sanders had made to an aspiring Latina politician. The criticism that he reprints in his article goes like this, in its entirety:


It is true that in order to end racism and sexism we have to begin by giving women and people of color a seat at the table. But that accomplishes very little unless/until we listen to them and find a way to work with them in coalition. To the extent that Sanders wants to avoid doing that in order to foster division within the Democratic Party, he is merely defending white male supremacy.
I’m not suggesting that the senator’s agenda is necessarily white male supremacy.

She seems to be saying that Sanders' comments to the young Latina woman serve to reinforce the idea that positions of power rightly belong in the hands of white men. She doesn't claim that he is reinforcing this idea intentionally, in fact she specifically says that she does NOT believe that Sanders has a white-supremacy agenda.  So why does he feel the need to point out that Bernie is not a white supremacist as if he were contradicting some popular canard?  I have no idea.

Oh, I see. Believing that white people are superior to other kinds of people, believing in the supremacy of white people, is not enough for a person to be labeled a white supremacist. Apparently, if you aren't a part of an organization dedicated to spreading/enforcing the idea of white supremacy, you're just a garden-variety "insensitive" or "biased" person, about whom we need not worry.

Except that these people vote.

Hey, I ain't happy about this either!