I saw this at the grocery store checkout line the other day:

And all I could think was "you answered your own question. HE happened to this party."

All the insanity, all the facts-optional, post-reason nonsense of today's Republican Party begins with Ronald Reagan.

He's the one who told people that math and logic and common sense be damned, you could cut taxes, increase military spending, and balance the budget. Did it make sense? No. Did it work? Not even close. Do they still believe it? They sure seem to. And they seem to believe it not because they really think it to be true, but because they really would like it to be true. The disdain for basic facts, information and knowledge is the baby birthed by Ronald Reagan.

As is the demonizing of the weak and powerless as the true source of the nation's ills. Now it's Muslims and Latino immigrants, in the 1980's it was the "welfare queen." The myth of the "queen" who pulled up to the welfare office in her Cadillac and that of the "young buck" buying steak on the taxpayers' dime were powerful images that Reagan used to vilify the poor. How different is today's image of the Muslim "radical jihadists" or the Mexican "rapists" swarming across our defenseless borders? Both are equally cynical attempts to point at the most vulnerable segments of society and shout "It's all their fault!"

Anyone who was alive in the 1980's should recognize this. Apparently, Time magazine reporter Peter Wehner  must not have been around back then.

The Party of Reagan Is No More

Once known for common sense, the GOP gives way to Donald Trump

With the death on March 6 of a dignified First Lady. . . 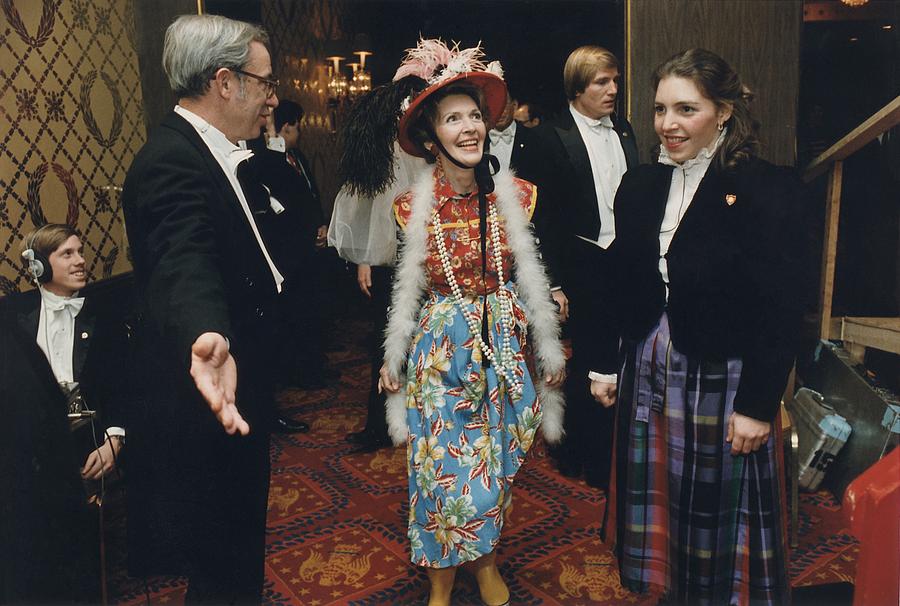 Pictured: The most dignified way of mocking poor people

Once know for common sense? Not since Ike left the White House!


. . . both Ronald and Nancy Reagan have now passed into history. Increasingly, it appears, the same can be said of the party they took such care in shaping.
The most obvious evidence of this is the rise of Donald Trump, a man who is the antithesis of so much that Ronald Reagan stood for: intellectual depth and philosophical consistency, respect for ideas and elevated rhetoric, civility and personal grace. The fact that Trump is the favorite to win the Republican presidential nomination shows how far the GOP has drifted from the animating spirit of the most consequential and revered Republican since Abraham Lincoln. I'm sorry. Remind me again which of us is on Mount Rushmore?

For those of us open to such self-examination–to understanding what conditions gave rise to Trump and Trumpism–the explanation starts with certain harmful habits. These include employing apocalyptic rhetoric, like the assertion that America is on the verge of becoming Nazi Germany. Such reckless language is evidence of fevered and disordered minds and paves the way for Trump’s incendiary rhetoric.


Yes, sensible Republicans have always warned that we were on the verge of becoming Soviet Russia! Totally different!


There’s another explanation as well–political and intellectual sclerosis, by which I mean the failure to apply enduring principles to changing circumstances. This is something that Reagan did quite well. He developed a policy agenda–on taxes, monetary policy and regulations–that addressed the problems of his era, including high inflation, high interest rates and high unemployment.


Reagan's enduring principle on taxes was to cut them. Then raise them. Every year after 1981. Never back to the levels where they needed to be to avoid enormous deficits, but still.
But, sure, on other issues, Reagan stuck doggedly to his principles. Like, for instance, anti-Communism. This admirable stance led him to admirably arm the Mujahidin (better known as the Taliban and al Queda), admirably support the brutal, murderous dictatorship in Guatemala, and admirably sell missles to Iran in order to fund Central American terrorists because they were in opposition to a government deemed too "leftist."


Ronald Reagan’s heirs have been decidedly less skilled at doing so.
One reason for this is that Reagan was so successful.


Successful? Mr. "fiscal responsibility" left us up to our ears in debt. His blood-soaked foreign policy made the world much less stable. How do you define success?

Anyway, let's just skip ahead to the ending.


And just as important, it means recapturing the spirit of Reagan–making our Republican Party a welcoming party once again, inclusive and open, united in its commitment to American ideals, hopeful about the future and attractive to working-class Americans.


Inclusive and open? You really think that under Reagan, the Republican Party was "inclusive and open?" Reagan was so hostile to the LGBT community that he wouldn't lift a finger, spend a dime, or even say a word about the AIDS epidemic. Reagan began his campaign in  Mississippi with a speech touting "states' rights," a term well understood in Mississippi and the rest of the old Confederacy as meaning "we can treat our blacks however we want and no damn federal guv'mint is gunna tell us otherwise." As previously mentioned, Reagan often invoked the stereotype of black folks growing fat and lazy on welfare. Do you think African Americans found the GOP particularly "inclusive and open" in the 1980's?

Look, I get it. You're scared of Trump. You're scared that he's going to bring your party down in flames. And he might. But don't pretend that Trump sprung fully formed from the forehead of Rupert Murdoch. He's a direct descendant of your sainted Ronald Reagan. You own this, all of you.