Comeback of the Year:

After seemingly spending the entire 2014 season punishing Common for leaving the cast, I had given up on Hell on Wheels. The Missus, being the wiser of us two, decided we should give it another chance. And it came back strong with a new plotline about Chinese railroad workers and their treatment at the hands of Union Pacific as well as a new love interest for Cullen Bohannon.
Welcome back, Hell on Wheels!

Watching what was once the best show on TV limping along for yet another season as if no one has told them that they haven't been funny in a decade is just depressing. It's Willie Mays with the Mets, it's Joe Namath with the Rams, it's the Rolling Stones recording "A Bigger Bang" in 2005. It's a travesty. And it's heartbreaking, considering what this show used to mean to a lot of us people of a certain age.


Well, this was a no-brainer since we lost both Jon Stewart and The Colbert Report.
In fact, watching Trevor Noah trying to fill Stewart's shoes on the Daily Show is a close second for saddest sight on TV.

I don't think anyone else is even close. Not even Bob's Burgers. The writing on FX's Archer is just too good, too sharp, to have any serious challengers. And the V.O. talent is spectacular. H. Jon Benjamin, Aisha Tyler, Chris Parnell, the great Jessica Walter, and Atlanta's own Amber Nash and Lucky Yates (from Dad's Garage Theater Company in the Old 4th Ward. If you live near ATL, please check them out.) And has there ever been a better character than Pam? (NO. No, there has not.) 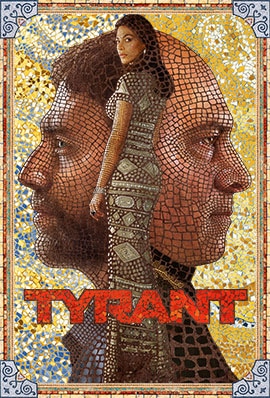 Narrowly beating out FX's The Americans, which pretty much makes FX the channel of the year.
I loved this show's first season, and the second got even better. Mainly because Bassam stopped being such a *ahem* "punk-ass bitch" and turned into a sort of bad-ass revolutionary. I already loved Jamal, the older brother torn between his desire to be a good and well-loved leader and the emptional damage that makes him listen to his bloodthirsty uncle and Lady MacBeth-esqe wife to become the titular Tyrant. But now that they've developed both Basam and Jamal's son Ahmed, as well as introducing an ISIS-style enemy army, it just gets better and better.