So, Martial Law as a Campaign Promise?

No wonder you're polling at six and a half percent!

Presidential candidate Mike Huckabee said at a campaign stop on Thursday that he would consider sending federal troops or the Federal Bureau of Investigation to stop abortions.
“I will not pretend there is nothing we can do to stop this,” Huckabee said. When a reporter asked if hew would use federal troops or the FBI to this end, he said, “We’ll see if I get to be president.”

The Supreme Court has ruled that abortion is perfectly legal. You don't like that. So you're toying with the idea of sending United States troops on to American soil to prevent women from accessing this perfectly legal procedure? And that's a selling point?

How in the hell would you justify this?

Huckabee said he would “invoke the 5th and 14th amendments for the protection of every human being.” The Fifth Amendment states, “No person shall be held to answer for a capital, or otherwise infamous crime, unless on a presentment or indictment of a grand jury, except in cases arising in the land or naval forces, or in the militia, when in actual service in time of war or public danger.”


So. . .  the 14th . . . the equal protection under the law amendment? So you figure that as long as martial law was applied equally to everyone? That would pass Constitutional muster?

Also, you are familiar with the Posse Comitatus Act, right? You're not allowed to use US troops to enforce the law. You know that, right?  Although, I guess in your defense they wouldn't actually be enforcing the law, they would be doing kind of the opposite. Preventing the law from being enforced and . . .HOW THE FUCK ARE WE EVEN TALKING ABOUT THIS????

So I assume that the other Republican candidates have all been called upon to "refudiate" Huckabee's terrifying statement?

Haha, of course they haven't. Huckabee is only a former governor and FOX tv host who's currently polling fifth in the Republican primary race. It's not like he's Sister Souljah!


Posted by Professor Chaos at 8:49 PM 4 comments: Links to this post

“Real-estate mogul Donald Trump said Monday that he is in favor of Republicans moving to shut down the federal government in the Planned Parenthood funding fight.
“I can tell you this: I would,” the presidential candidate said when asked by conservative radio host Hugh Hewitt whether he supports shutting the government down in the fight.”

He's learning how to pander. Because you know Trump doesn't give a shit about Planned Parenthood or aborted fetuses. He's never been a "family values" guy. 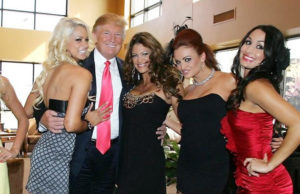 Trump only cares about two things:
1.  Being rich and famous
2.  Getting richer and famouser.

That's it. So the only reason that he's talking about this is to shore up his support with the Religious Right. For some reason, they've taken a shine to the thrice-married libertine, but anything less than full-throated opposition to reproductive freedom could cost him some votes with the Bible-thumpers, and, contrary to what I was sure of a few weeks ago, Trump may actually be in this to win it.

I assumed he was running as a publicity stunt, a chance to try and garner some adulation from the rubes before returning to his game show hosting gig, but suddenly he found himself leading in the polls. And having spent a lifetime surrounded by sycophants and yes-men, he may actually have started to believe he can pull this off. But if he was going to make a serious run, he had to learn to pander. He seems to be learning.

Posted by Professor Chaos at 8:11 PM 4 comments: Links to this post