It is now officially OK to vote for Michele Bachmann. God said so.

From the geniuses at Wing Nut Daily:


With Herman Cain out of the race, is Michele Bachmann poised for a second surge? And is there a biblical precedent for electing a woman president?

Well, since there are exactly zero elections in the Bible, I'm going to go out on a limb and guess that no, there is no biblical precedent for electing a woman president. 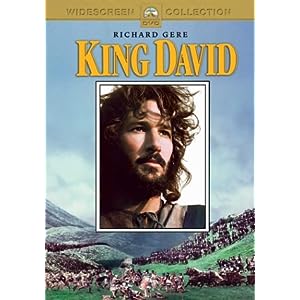 I know I didn't vote for him, did you?

Many people forget that Michele Bachman had a first surge that briefly made her the GOP presidential primary frontrunner.

No, we haven't forgotten. Our sides still ache from laughing.

She appealed to secular conservatives due to positions espousing smaller government and low taxes. Evangelical Christians loved her unashamed positions on issues of faith.

But somewhere along the way, "buyer's remorse" set in. Some evangelicals questioned the biblical teachings on women submitting to their husbands, wondering if they might be sinning by supporting and voting for a woman president.

Oh, that must be what scared people off of Bachmann. Not her insistence that the founding fathers had ended slavery or her desire to eliminate the minimum wage. No, it must be the boobs.


So, the question is: Is there a biblical precedent for a woman president?
Yes. In a word: Deborah. (Artist's Rendition)
Yes, anyone who has ever been to Sunday School remembers the stories of the Deborah Administration!

The book of Judges, in Chapters 4 and 5, explains an eerily similar pattern to today's political and economic state of America. Ancient Israel had fallen on tough times.

The only other time in history during which a country had ever fallen on hard times. Eerie!


They had rejected Yahweh God and embraced the ways of the world.

Just like America with our one atheist in the Congress. That's 1/135th of the House!

Pete Stark trivia: He was my Congressman when I lived in Northern California.

They were surrounded by their enemies,

They were surrounded by their enemies, and their men didn't have the moral fortitude to do what was necessary to survive.

Um, most of us seem to be surviving somehow. But whatever, do go on!


Enter Deborah, a prophetess, a righteous judge and a "Mother in Israel" (read: Rep. Bachmann with five biological children and 23 foster kids).

A mother in Israel, a foster mother in Minnesota. Tomato, tomahto. We know how much respect you have for mothers!

A man named Barak – really, we're not making this stuff up – was supposed to lead the Israelites to fight evil Jabin's Canaanite army commander, Sisera. But Barak wimped out, refusing to go unless Deborah went with him.

It's not so much that he was "supposed to" lead the Israelites as Deborah seemed to pick him at random, but whatever. And since Deborah was the one that God supposedly spoke through, wouldn't it make sense that he would want her to come with?

Ultimately Deborah's ally, Jael (another woman), killed cruel commander Sisera by hammering a tent peg through his temple, ushering in 40 years of peace for Israel.

The family of Heber the Kenite was allied with Jabin of Hazor, dummy. Everyone knows that! And Jabin King of Hazor was the enemy, the king for whom Sisera worked. 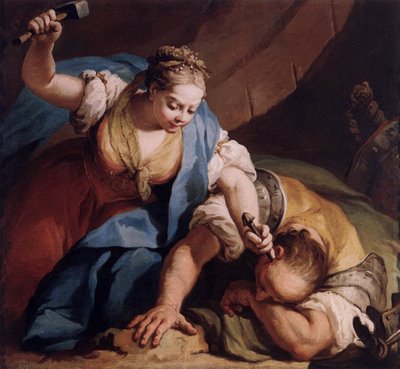 Also, Jael wife of Heber was a fuckin bad-ass!

The conclusion: There is a biblical precedent set for God sending a woman to do a man's job when a man isn't willing to boldly step up to the plate to get the job done. Today, in our quest for a moral champion, we have witnessed a long line of conservative men who had their shot and failed. Rick Perry entered both barrels blazing, but floundered.

While Ron Paul is a professing pro-life Christian, he refuses to end abortion, and being of the "libertarian" denomination, he leaves important moral matters like abortion and drug use to individual states to decide.

Robotic Romney with never so much as a hair out of place, has double trouble being from two problematic denominations to Christians: 1) He's a Mormon and 2) he's a liberal.

And with Cain quitting amidst suspicions of moral failure, how will Newt Gingrich survive the public scrutiny over cheating on his first wife and marrying his mistress, only to cheat on her and marry again?

I don't know, but with Cain dropping out, Captain Adultery is now in first place. Surviving doesn't really seem to be a problem for him. Oh, by the way, I can never keep track, do we not hate Catholics anymore?

And alas, Huntsman is a younger version of Bob Dole.

Oh, come on! That's it? That's like10 words! No respect!
That leaves Rick Santorum and Michele Bachmann. And while Santorum stands for the right issues, he has proven to be shaky in the heat of battle, inexplicably backing a string of liberals, including the infamous liberal Republican Arlen Specter in Pennsylvania instead of staunch conservative Pat Toomey.

Could you support this thing?

Bottom line: The only man left standing is a woman. Her name is Michele Bachman, and she's set for a second surge.

So it's good to know that if you have absolutely exhausted all male possibilities, God will apparently forgive you, just this once, for voting for a lady-type person. Thanks, WND!
Posted by Professor Chaos at 8:38 PM 1 comment: Links to this post