They're at it again

Whenever things don't go their way, they want to pick up their bat and ball and go home.

Plans for the new state of "North Colorado" are, of course proceeding apace, by which I mean "will never have a snowball's chance in hell of happening."

But of course, they aren't the only ones. One county in the far northest part of California has just officially voted to pack up their belongings and move back in with their parents -- I mean form their own state.

State of Jefferson: California county votes for secession from state


The Siskiyou County Board of Supervisors voted 4-1 on Tuesday for a declaration of secession, the Record Searchlight of Redding reported.


Residents of the majority-Republican [duh!] Siskiyou County lobbied the board in August to consider secession, according to the Record Searchlight. In addition to a lack of representation in Sacramento, they cited concerns about water rights and a rural fire prevention fee.

And God forbid that anyone should pay a fee for fire protection! Who needs the fucking Nanny State when we've got garden hoses and buckets?
(By the way, the fee is a whopping $150 per year for fire prevention!)

Of course, there are other reasons for wanting to secede:

"We realize it is not a resolution; it is not an ordinance," Liz Bowen said. "We do appreciate the county board of supervisors knowing that our economy is really poor here. We're having a terrible time for a lot of reasons, and the biggest reason is over regulating."

Of course! Of course that's why the economy is suffering! The regulations! Just think how much better the local farmers would be doing if they were just allowed to sell e-coli flavored spinach! Or think of how much more money the local fisherman would bringing in if only the salmon had been allowed to go extinct like God intended!

So that's Colorado and California wingnuts trying to storm off in a huff and make it all by themselves on their own. Ball's in your court, Texas!

Powerful Texas Republican Advocates For Seceding From The United States

Texas Railroad Commissioner Barry Smitherman, who is running to be the next state Attorney General, is preparing his state to secede from the United States and become an “independent nation.”

Don't let the door hit you in the ass on your way out!


In an interview with WND, a right-wing birther hub, Smitherman argued that Texas not only has the capability to survive without the rest of the country, but is actively taking steps to prepare for that day. “Generally speaking, we have made great progress in becoming an independent nation,” he declared. “I think we want to continue down that path so that if the rest of the country falls apart, Texas can operate as a stand-alone entity.”

Yeah, that would be a lot more impressive if you weren't currently incapable of paving your goddamm roads!

Officials in Texas this week began converting 83 miles of asphalt road to unpaved lanes of gravel. Years of heavy truck travel has ravaged entire routes in south and west Texas, and going back to gravel is for now the only affordable answer.


But sure, yeah, you're obviously pretty well-positioned to go off on your own.
Don't let me stop you!
Or reality. Don't let reality stop you!

Posted by Professor Chaos at 11:43 PM 2 comments: Links to this post 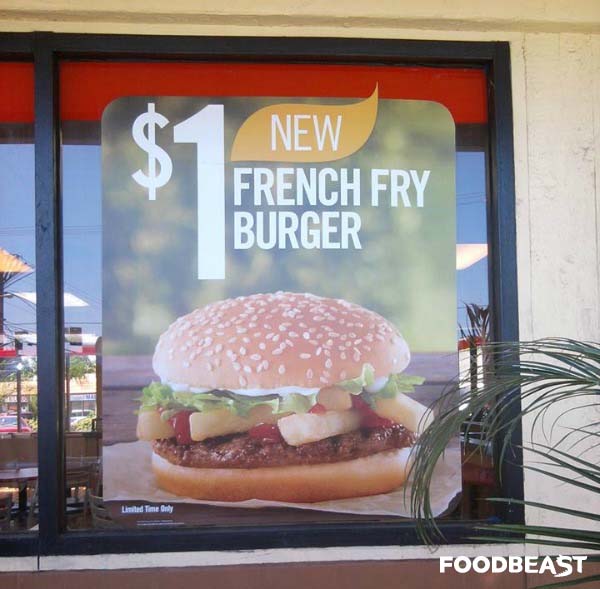 You put some French fries on  your burger.

Couldn't I just do that myself?

Wouldn't that be just as easy?

Except it would taste good.

Posted by Professor Chaos at 11:06 PM 2 comments: Links to this post