Martin Peretz is an Idiot. And an Ass. And just Awful. This is Martin Peretz.

Martin is the editor of the New Republic, a disgraceful rag which I hear was once actually respectable a long time ago. But not now. No. Not with Martin Peretz at the helm for sure.

Here's a recent article Martin burped up onto the interwebs recently:

The newspaper has done a poll of New York City residents which found that 33% of them thought Muslim-American "more sympathetic to terrorists" than other citizens.

Frankly, I don't trust opinion surveys on matters like this. But I'd guess that if respondents were truly honest with the pollsters and with themselves the percentage would be considerably higher.

Um, okay. And this is based on what, exactly?

Where does the Times get reliable data on the feelings of American Muslims (or, for that matter, Arab Americans) about terrorists and terrorism? Forgive me: I don't think such data even exists.

Um, they get it by doing opinion polls? That's how they find out about people's opinions?

And, to tell you the truth, I do not think there's much reliable data on how Americans see American Muslims either.

And what you think is relevant how?

But the Times survey does infer some knowledge about this matter.

Infer? The survey infers some knowledge? Really? You may infer something from reading the survey, the survey might imply something, but since the survey is not a sentient being, it has no capacity for inference. And you're the editor, hmm?

Remember, though, that these responses are from New Yorkers and New Yorkers alone. If you believe, as I do, that citizens of the five boroughs are not only more "diverse and cosmopolitan" but also more tolerant and condoning than most other Americans than you might come to the conclusion that our non-New Yorker fellow citizens are far more deeply biased and warped than the Gotham locals.

So, if we believe this stereotype about New Yorkers, then we may also believe stereotypes about the folks in the flyover states?

Actually, no one has shown that a single serious demonstration against Muslims and Arabs, against their beliefs and behavior can be raised in this country. 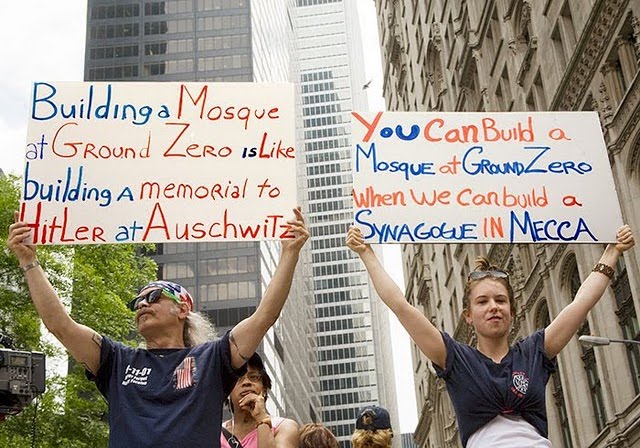 In fact, there has not been a single rally or demonstration in America aimed at Muslim or Arab interests or their commitments to foreign governments and, more likely, to foreign insurgencies and, yes, quite alien philosophies. I suggest that this is largely the case because Americans are so fearful of being accused of bias, however the injustice of the charge might be.

However the injustice of the charge might be? So you're saying that Americans won't act like bigots for fear of being labeled bigots?

Frankly, the only demonstration against a mass killing (after all, they happen nearly every day) I've read about was last week in Pakistan when some 30-odd people, not designated and not guilty of doing anything except going to a Shia shrine were blown right then and there.

I'm sorry, where did you say this shrine is where everyone gets blown? This must be a very popular religion!

A day or two after two bombs went off taking the lives of what turned out--you can read it about in the recent Tehran Times--to be just under one hundred Shi'ites in two town different towns.

This intense epidemic of slaughter has been going on for nearly a decade and a half...without protest, without anything. And it has been going for decades and centuries before that.

This has been going on for 15 years! And also for decades and centuries!

But, frankly, Muslim life is cheap, most notably to Muslims. 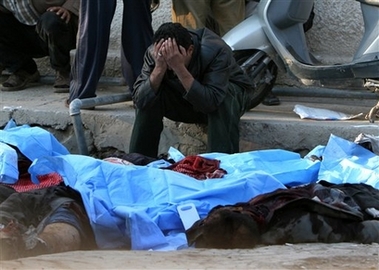 So, yes, I wonder whether I need honor these people and pretend that they are worthy of the privileges of the First Amendment which I have in my gut the sense that they will abuse.

Hey, asshole! The First Amendment is not a privilege! It guarantees the right of people to freedom of speech. A right which, yes, can be abused. But it's hard to imagine anyons abusing their First Amendment rights worse than you have in this article.
Posted by Professor Chaos at 6:27 PM 1 comment: Links to this post

Crazy Candidate of the Day - Can't possibly be serious edition

This! Man! Is! Phil! Davidson!
and he is running for some stupid office no one cares about in some place called Star County.
This guy has to be a joke. He's the political equivalent of the kids who go on the first week of American Idol and sing horribly.


He can't even remember his favorite quote.
Posted by Professor Chaos at 6:13 PM 2 comments: Links to this post