And here we go. Here we go with the whole "your protesting is just making things worse, why don't you just be quiet and polite and just put up with the destruction of your country? Isn't it better to see a once-great nation destroyed than to hurt the feelings of the extreme right?"


Also, there's a rule about headlines, and I can't remember to whom the credit goes, but the rule states that whenever a headline  poses a question you can assume the answer is no. I'm assuming this headline will be no exception.

Jeffrey Medford, a small-business owner in South Carolina, voted reluctantly for Donald Trump. As a conservative, he felt the need to choose the Republican. But some things are making him feel uncomfortable — parts of Mr. Trump’s travel ban, for example, and the recurring theme of his apparent affinity for Russia

So he voted for Orange Julius Caesar, but now he's a bit uncomfortable with him doing the things he said he would do before this wiener voted for him? And did he really not know that Il Douche was chummy with Putin before casting his vote?


Mr. Medford should be a natural ally for liberals trying to convince the country that Mr. Trump was a bad choice. But it is not working out that way. Every time Mr. Medford dips into the political debate — either with strangers on Facebook or friends in New York and Los Angeles — he comes away feeling battered by contempt and an attitude of moral superiority

Why should Medford be an ally of "liberals?"It's like saying that a guy who feels naseous after eating a whole pack of hot dogs should be an ally of vegans trying to convince people that meat is murder. The guy who thinks maybe Cheeto Mussolini might have a couple of flaws after all is supposed to be an ally of the people who tried to warn him that electing a ridiculously unqualified walking personality disorder with a history of assaulting women and defrauding business associates was a monstrously bad idea? Fuck this guy. What makes anyone think that this guy is going to realize how stupid he's been and put a Bernie 2020 sticker on his douchemobile? If anything, he's maybe going to think "yeah, I shoulda voted for Ted Cruz" or "maybe Jeb! wasn't so bad after all."

And I think it's fair to say that those of us who did not support a racist misogynist pussy-grabber have a right to feel a bit of moral superiority to those who did, those who looked at the racism, xenophopbia, hatred of Muslims and boasts of sexual assault and did not find a single deal-breaker among them.

“We’re backed into a corner,” said Mr. Medford, 46, whose business teaches people to be filmmakers. “There are at least some things about Trump I find to be defensible. But they are saying: ‘Agree with us 100 percent or you are morally bankrupt. You’re an idiot if you support any part of Trump.’ ” 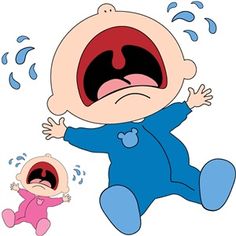 Oh my Gawd! Conservatives are such fragile flowers!

Who is it that is saying "agree with us 100% or you're morally bankrupt?" Go ahead, name one person who has said that to you. We'll wait. . .
Because of course no one has said that to him. Of course he can't give a single example. Interestingly, he also seems to be unable to give an example of any of the things he finds defensible about the Rump.
And, by the way, if a month in to his administration, the best thing you can say about him is that he has some aspects that are "defensible," not "laudable" or "commendable" but "defensible" - if that's the best you can say about the man you chose to fill the highest office in the land, that he's not 100 percent completely indefensible, maybe you just ought to go ahead and sit out the next several elections.


You didn't choose a side? Really? What the hell do you think voting is? You didn't fill out your ballot for "oh, either one, they both seem okay." You chose a side. No one forced you to, you could have abstained from voting. No one would have missed you at all.


Liberals may feel energized by a surge in political activism, and a unified stance against a president they see as irresponsible and even dangerous. But that momentum is provoking an equal and opposite reaction on the right. In recent interviews, conservative voters said they felt assaulted by what they said was a kind of moral Bolshevism — the belief that the liberal vision for the country was the only right one. Disagreeing meant being publicly shamed.


Hmm, funny how we never saw articles like this for the last 8 years while conservatives were dressing up as Paul Revere and demanding their country back. No one ever said to the teabaggers, "hey, you know, protesting might feel good, but you risk alienating liberals  with your harsh eliminationist rhetoric." 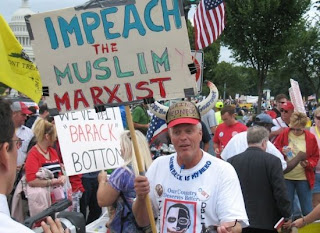 Surely there's no harm in telling people who voted for a mild-mannered centrist that they support a Muslim Marxist! They're sure to come around to our side
when they read our pithy signage!

Never underestimate the power of a well-reasoned argument
to sway your opponents to your side.


Protests and righteous indignation on social media and in Hollywood may seem to liberals to be about policy and persuasion. But moderate conservatives say they are having the opposite effect, chipping away at their middle ground and pushing them closer to Mr. Trump.


Moderate conservatives? We might lose the support of moderate conservatives? Both of them?
And what is a "moderate conservative" these days anyway? Someone who would rather have seen Mike Pence at the top of the ticket? Someone who thinks maybe the Republicans should shut down the federal government a little less often? Someone who thinks that maybe Social Security shouldn't be completely eliminated?
Assuming these people exist, and if they do, they had to have voted for Il Douche, how does pushing them even closer to the gaping maw of utter insanity make any real difference?
I mean, my God! What if instead of tepid support for Trump, they instead start feeling strong support for him. What a gamechanger! Just think how much more enthusiastically they'll pull the (R) lever next time! That will surely make a huge difference!

The name calling from the left is crazy,” said Bryce Youngquist, 34, who works in sales for a tech start-up in Mountain View, Calif., a liberal enclave where admitting you voted for Mr. Trump is a little like saying in the 1950s that you were gay.

No, being a Trump supporter is not anything like being gay in the 1950's.

Oh, and before you even begin, let me just go ahead and tell you that being a Trump voter in california is also NOTHING like being a Jew in Germany in the 1930's. 
The name calling from the left is crazy,” said Bryce Youngquist. . .  “They are complaining that Trump calls people names, but they turned into some mean people.”


Aw, no! Did the mean people hurt your little feelings? Ahh, here have your teddy bear and go take a nice little nap, eh?

Also, gosh, I wonder how it must feel to have your political opponents insult you and call you names? 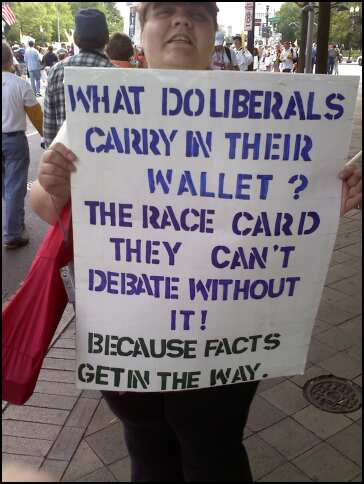 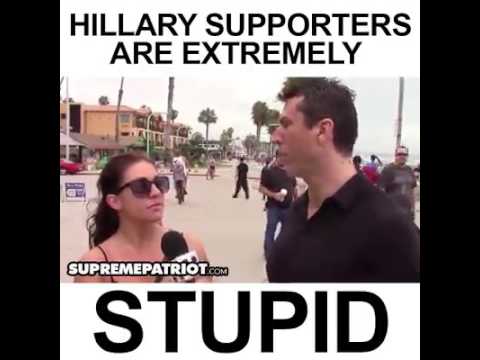 Mr. Youngquist stayed in the closet for months about his support for Mr. Trump. He did not put a bumper sticker on his car, for fear it would be keyed.


The fact that this idiot feared that his car would be keyed is NOT evidence of.. . well., it's not evidence of anything. But it definitely is not evidence of liberals being too mean to poor little conservatives. If I see someone walking toward my car and I lock the doors because I think he looks suspicious, that's not evidence that this stranger is a car thief. It's just me being overly-cautious.  And Mr. Youngtwit fearing someone would key his car almost certainly has more to do with the media he listens to telling him that "liberals" are out to get him than it does with any actual lib/progressive people he might encounter.

And yes, I saw the "in the closet" line, It's really just too pathetic to comment on.

The only place he felt comfortable wearing his Make America Great Again hat was on a vacation in China. Even dating became difficult. Many people on Tinder have a warning on their profile: “Trump supporters swipe left” — meaning, get lost.


Oh my GOD! Are you telling me that some ladies on Tinder don't want to date men whose political beliefs are the opposite of theirs? Discrimination! Next you'll be telling me that some people don't want a relationship with someone of a different religion!
I mean, isn't political compatibility one of the basic criteria people have always had for dating? I was going to ask whether it was likely that Mr. Youngtwit would be interested in dating a liberal woman, but I realized the answer was probably "if her boobs are nice enough."


He came out a few days before the election. On election night, a friend posted on Facebook, “You are a disgusting human being.”
“They were making me want to support him more with how irrational they were being,” Mr. Youngquist said.

*Sigh* No, he did not "come out." Do not cheapen the difficult experience that many LGBT people have had and will have by comparing this douchebag's experience to theirs.

Also, he not only voted for Il Douche, he had a "Make America Hate Again" hat. How much more could he support the guy? "Oh, they make me want to support him more?"  What's he gonna do, vote for him twice next time?


Conservatives have gotten vicious, too, sometimes with Mr. Trump’s encouragement.

Oh, Eleven paragraphs in and we're finally going to acknowledge that? For one tiny throwaway sentence?
Are we going to mention that "conservatives getting vicious" includes things like bomb threats phoned into Jewish centers and mosques being burned down and shot up? Not that that compares to the real  sin of being a jerk on Facebook, but still.

Conservatives have gotten vicious, too, sometimes with Mr. Trump’s encouragement. But if political action is meant to persuade people that Mr. Trump is bad for the country, then people on the fence would seem a logical place to start. Yet many seemingly persuadable conservatives say that liberals are burning bridges rather than building them.


Nope! Of course we're not going to touch on that. Because no matter how many acts of violence, no matter how many hate crimes are committed by Trump supporters, the real villains are of course you dumb old liberals being impolite on social media. If only you liberal jerks would reach out to the voters who chose a bloated racist buffoon with a trail of bankruptcies and trophy wives to be president because Hillary seemed kinda bitchy, surely they would join hands with us across the aisle and usher in a new golden era of bipartisan cooperation. But that will never happen now, because right-wing conservayives got their feelings hurt when you stupid liberal jerks called them names.

The end of America is on your heads, dumb old liberals!


Posted by Professor Chaos at 8:03 PM 4 comments: Links to this post