What the HELL is this shit? 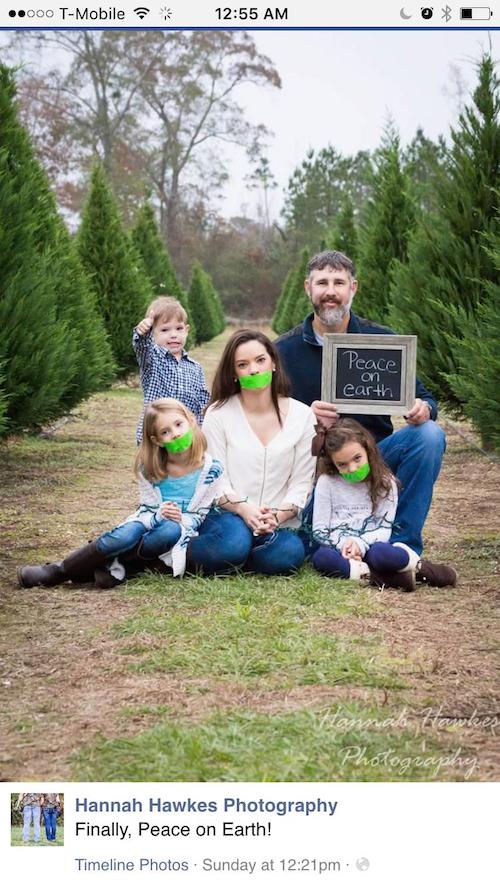 Someone named Hannah Hawkes, who is presumably a ladyperson, took this photo and posted it on-line as if it weren't sickening at all.

I know, it's supposed to be a joke but that doesn't make it any better. It might make it even worse, because presenting this type of misogyny as lighthearted, harmless fun just enforces the idea that it's no big deal to humiliate and degrade your wife and daughters.
Look, whatever this ass and his wife find amusing is their own business, they're both presumably consenting adults, but what do you think you're teaching those liitle girls? And what are you teaching that little boy? What kind of relationships do you think these kids are going to have once they're old enough to start dating? When they've been taught from an early age that females are annoyances who need to shut up or we'll shut them up, what chance do they have at developing healthy relationships? Is there any way this little boy doesn't grow up to be, if not an outright abuser, at least someone who disrespects and devalues women? And is there any way these little girls don't grow up with serious self-esteem issues?
And it's not just because of this one picture. This picture doesn't happen if this isn't the normal family dynamic in this household. But it's alarming that the father (and maybe the mother) are so comfortable with the family misogyny that they would use this as their Christmas card as if this is nothing of which to be ashamed.

So, does Hannah Hawkes have an explanation for this horror show? 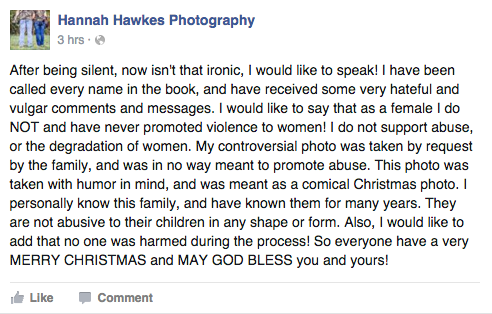 Oh, surprisingly, she's smug, self-righteous and one of those people who think they're being bold and daring by saying "merry Christmas" (in all caps!)

So you don't support abuse or the degradation of women, you just document it?
It was taken by the request of the family? So what? If someone requests something offensive, you say no. It's easy. They say "Hey, Hannah, would you please take a photo of me drowning these puppies?" and you say "No. I would not like any part of that, for I am a decent human being."

They are not abusive to their children in any shape or form? Um, except in that photo. I assume you mean that the little girls don't get beaten or molested by their parents, but in this photo of yours, they're clearly being told that they are worthless. That no one wants to hear what they have to say. And that they are absolutely less valued than the male members of the family.
Look at the picture: Do the little girls look like they're in on the joke?
Do you think that they see the "humor" in it?
They look miserable. They look like kidnapping victims, sitting with their hands together as if bound at the wrists with tape over their mouths. It looks like exhibit A in an child abduction case.

And you're going to sit there and smugly assure us that "no one was harmed during the process?" Just because they aren't being physically harmed doesn't mean no harm is being done. They will bear the emotional scars for life.

Posted by Professor Chaos at 8:43 PM 6 comments: Links to this post