Browsing through the headlines on Yahoo! News this evening, this caught my eye:

Home field advantage? I didn't even realize this was a competition. 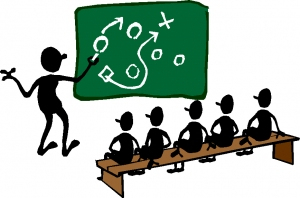 Okay, Johnson, you proselytize to the left. Henderson, you baptize the linebacker. And if this works, Rodriguez should have an easy conversion!

When it comes to faith, times in America are changing. In fact, in many ways, they’ve already changed. Just ask Ed Stetzer, the executive director of LifeWay Research and my co-host for “BreakPoint This Week.” Commenting on a recent Pew Research Center report, Ed told the Washington Post, “America is undergoing a religious polarization.”
Indeed. According to Pew, “the percentage of adults … who describe themselves as Christians has dropped by nearly eight percentage points in just seven years. And the percentage of Americans who describe themselves as atheist, agnostic or ‘nothing in particular,’ has jumped more than six points.

You slackers call that believing? My grandmother could out-believe you bunch of bums!

And on the other hand, we’re seeing an increase of those who are serious about their faith when it comes to spiritual disciplines and activities: higher levels of at least weekly Bible reading, participating in weekly prayer or Bible study groups, sharing faith with others at least weekly. So, as Christianity Today reported, “The rich in faith get richer while the poor get poorer.”
Stetzer sees several implications of this religious polarization. First, he says, Christians no longer have what he calls a “home-field advantage” in American culture.

Okay, listen up. Christians are down to a mere 70% of Americans, so we're on "their" turf now. Things are gonna be a lot tougher!


Seriously, this is the Pew poll that he links to that shows how Christians are, what, exactly? Becoming an oppressed minority? I guess?

So, Christians make up only a tiny 71% of the US population, while the dreaded Muslims have climbed up to almost an entire one percent!

So, how does this loss of "home field" manifest itself?

“For years,” Ed states, “Christians could assume a person with whom they struck up a conversation was probably a fellow believer. If not, the other person would at least share their cultural values. But that is no longer the case. Increasingly, Americans are just as likely to have no faith background, be of another religion or even hold a hostile view of faith. That’s new territory for most Christians.”


Um, yeah, that would be new territory. If it were remotely close to being true. According to the poll that you cited, you have about a 70% chance that the person you're conversing with is a fellow Christian.  About 73% fall under the rubric "Judeo-Christian," and even most non-religious people don't necessarily have a "hostile view of faith." When you strike up a conversation with a stranger, the odds are about 1 in 300,000,000 that you've run into Bill Maher.

Second, Ed says, we “have lost cultural privilege.” Gone are the days when most stores were closed on Sundays, or schools cleared their schedules on Wednesday nights so that families could go to prayer meetings.


Well, A) good. No religious group is supposed to be privileged above another,
and B) I have lived in America for nearly (none of your beeswax) years now, and I can not remember a time when stores routinely closed on Sundays. Other than some local mom-and-pop shops. No large corporate chains have closed on Sundays in my recollection except Chic-Fil-A. Stores being open on Sunday has nothing to do with any cultural shift away from religion. It's just good old fashioned capitalist greed.

But Ed says, that’s not all bad. “Historically,” he writes, “Christians have survived—and thrived—as a passionate and convictional minority.”

Well, okay. But really, not since the time of Constantine I. When was the last time Christians were any kind of minority in the Western world?  My God, the West was ruled by the Holy Roman Empire from the time of Charlemagne until the early 19th Century. Christians haven't been a minority in the US since white people first outnumbered Native Americans.

The third implication, Ed says, it will be easier to tell who is a Christian and who isn’t.  More and more people are facing life without God and without the hope—and they know it.


I don't think they do. I don't think your average atheist is moping around, wringing his hands and bemoaning his lack of hope. Honestly, they seem fine.

So what can we do to bridge the polarization gap? First, we need to be among those Christians who are sharing the good news with our neighbors. So we cannot underestimate the significance of the world of ideas, and their consequences if we are going to be able to live well in this culture. It’s always been important, but as we’ve gone from what Chuck Colson and Francis Schaeffer called a “post-Christian culture” to what I think we can safely call “a consciously post-Christian culture,” it’s even more important.

I really don't get why some people feel the need to constantly portray themselves as the victims of a hostile society. How does that make you feel good?  If you're going to live in a fantasy world, why not make it a pleasant place for you? It can bed whatever you want, you know. For instance, in my make-believe world, I am the world's highest-paid and most sought-after kitten petter whose biggest problem is that it's annoying constantly being mistaken for Channing Tatum. Why not try something like that?

Posted by Professor Chaos at 8:32 PM 4 comments: Links to this post