So Mike Pence was in Korea during Easter weekend and gave a speech to some very unfortunate soldiers.:

Remarks by the Vice President and Mrs. Pence to the Troops, Seoul, South Korea


So, when you give a speech it's often recommended that you open with some really obsequious ass-kissing of the most powerful man in the room.

THE VICE PRESIDENT:  Thank you so much, General Brooks.  It is an honor to be with you today on this Easter Sunday, and let me invite a round of applause from all the great soldiers and their families who are gathered here for General Vincent Brooks, and the great leadership that he provides here to United States Forces Korea.  (Applause.)
General, we are proud -- grateful for your leadership.


Yeah, that's exactly what the enlisted men and women want to be doing on Sunday morning, applauding the fucking general.

To Chaplain Kim, to Chaplain Wasaki (ph), and to all of those who made the service so special to us, my daughter Audrey already told me that was one of the best sermons she’s heard in a year and a half.  So what a special Easter sermon.  (Applause.)


Okay, what the fuck is wrong with your daughter?
A: Who comments on sermons other than to say "well, at least it wasn't too long!" or "Gawd, I bet Jesus fell asleep halfway through that one!"

B: Who ranks sermons? It's one thing to say "that was the best sermon I've ever heard, I almost stayed awake through the whole thing," but the best she's heard in a year and a half? That's like Elias Sports Bureau level of keeping track of stuff. Does she take notes? I bet she takes notes. Compiles them in some sort of binder. Ranks them in order of inspirationalness or something. You have a weird fucking family, is what I'm getting at, Mr Pence.

I bring greetings this morning from your Commander-in-Chief, President Donald Trump.  (Applause.)  I spoke to the President early today, and I spoke to him on the way over.  And he asked me to be here, and he told me in no uncertain terms to make sure that I told all of you we're proud of you, and we are grateful for your service to the United States of America on this frontier of freedom that is South Korea.  (Applause.)

He'd have been here himself, but y'all just don't have that really good chocolate cake that he likes. Plus those golfballs aren't gonna hit themselves, right?

Also, are we seriously pretending that standing on a strip of land between the two Koreas is doing some sort of service to the United States?

In fact, I can say with confidence that every American is proud of your service here, and the attention that this part of the world has gotten from people back home is probably no surprise to all of you who are gathered here today.  This morning’s provocation from the north is just the latest reminder of the risks each one of you face every day in the defense of the freedom of the people of South Korea and the defense of America in this part of the world.

Hey, here's a fun fact. America is not in this part of the world! So these men and women who signed up to serve their country are sitting there potentially in harm's way for what, exactly? The "defence of the freedom of the people of South Korea?" Oh, your families must be so proud. Because as we all know, if Seoul falls, next comes, um . . . that's probably pretty much it. The threat never makes it anywhere near America.


THE VICE PRESIDENT:  It is the greatest privilege of my life to serve as Vice President to a President who cares so deeply about the men and women of our armed forces and their families.

Of course, neither Il Douche nor myself actually ever got around to serving in the military, but if the President were here instead of on the golf course, he'd probably spew the same empty platitudes about your service that I have.

And let me promise those family members and all of you in uniform here today that under President Trump’s leadership, we're going to rebuild our military.  We're going to restore the arsenal of democracy.  We're going to give our soldiers, sailors, airmen, Marines, and Coast Guard the resources you need and deserve to accomplish the mission you are given and come home safe.  That's a promise from your Commander-in-Chief.  (Applause.)

You know, a promise. Like "Mexico's gonna pay for the wall," or "I will defeat ISIS in 30 days," or repealing and replacing Obamacare will be done Day one." Those kind of promises.
Also, is it really advisable to tell an audience of service members that the military needs to be rebuilt? Like, "you may feel like members of the finest fighting force ever assembled, but trust me the American Army is in a fucking shambles! You guys couldn't fight your way out of a paper bag right now. Honest to God, I'm amazed the Russians haven't just walked in and taken over yet!"

This is a challenging time all over the world, but especially here in the Asia Pacific.


Um, the "Asia Pacific" is the part of the world you find most challenging right now? Not, say, Syria? Or Iraq? Turkey, maybe? Russia? It's the Korean Peninsula that's got you losing sleep?

The opportunity for me to be here today at such a time as this is a great privilege for me, but let me assure you under President Trump’s leadership, our resolve has never been stronger.

I'm not sure you understand what the word "resolve" means. "Resolve" is not generally shown by someone who has big plans for handling North Korea, then spends 10 minutes talking to the Chinese President and says "oh, man. That's all way more complicated than I thought. Maybe I'll just go play golf instead."


Our commitment to this historic alliance with the courageous people of South Korea has never been stronger.  And with your help and with God’s help, freedom will ever prevail on this peninsula.

How much bravery does it take to be SOUTH Korea right now?
Your country looks like this:

You have a manufacturing base that turns out some of the finest products in the world, from smartphones to cars. You can't possibly have any trouble manufacturing weaponry.

Meanwhile the country who is your biggest threat looks like this:

Their military is apparently composed of gamine teens with possibly toy guns.

And this is the height of their technology:

And standing between them and you is the military might of the United States of goddamm America. I'm not an especially brave man, but I think I would sleep comfortably there.

But it is Easter Sunday, and as I look out at all these courageous Americans and courageous Koreans who are gathered here today, I’m deeply humbled.  I truly am.  We celebrate today what Karen and I and those of us gathered here recall as that Resurrection Sunday, and that worship service was so sublime.
But it puts me to mind of one of my favorite stories in the Old Book.

Okay, it's the "GOOD Book." Not the "Old Book." No one calls it the "old Book." If you're going to get all pious on Easter Sunday, at least show some familiarity with the Bible/


It’s the story of a moment where the Nazarene encountered a soldier.  The soldier walked up to him and told him that he had someone ill in his home, and he asked if he might take action to be helpful.


What?!?!? "Take action to be helpful?"
Also, there are two versions of this story in the New Testament, and in neither does the Centurion ask Jesus to take any action or to be helpful.

5 And when Jesus was entered into Capernaum, there came unto him a centurion, beseeching him,
6 And saying, Lord, my servant lieth at home sick of the palsy, grievously tormented.
7 And Jesus saith unto him, I will come and heal him.

The Centurion just tells Jesus that his servant is sick. Jesus volunteers to go and heal him, without being asked because that's the kind of stand-up guy Jesus was.

Here is the second:

7 Now when he had ended all his sayings in the audience of the people, he entered into Capernaum.
2 And a certain centurion's servant, who was dear unto him, was sick, and ready to die.
3 And when he heard of Jesus, he sent unto him the elders of the Jews, beseeching him that he would come and heal his servant.
4 And when they came to Jesus, they besought him instantly, saying, That he was worthy for whom he should do this:


In this version, it's "the elders of the Jews" that ask Jesus to heal the man's servant.
In neither version does a "soldier" ask Jesus to "take action to be helpful." Can you imagine how rude that would have been? "Hey, Jesus. My servant is sick. Why don't you make yourself useful and maybe take some action for a change, you lazy Messiah?"


I don't mean to be nit-pickey, but you're the unctuous bastard who's going around talking Bible stories like you're the Vice President of the Vatican.

And as Jesus began to walk with him, he said, no, you don't need to come with me.  He said, I’m a man under authority.  He said, I tell one to do this and he does it.  I tell another to do this and he does it.  He said, you just say the word and that servant under my household will be healed.
The words that ever struck me from that story were there at that crossroads, the story recalls in a little town called Capernaum.  It simply said that Jesus was amazed.
At no other point in any of the stories of his life do I hear that he was amazed, except when he was speaking to a soldier.  Because he saw orientation to authority and he saw faith.

WHAT? Orientation to authority? That's what you think amazed Jesus?
Because this is how the story actually ends:

In Luke:
9 When Jesus heard these things, he marvelled at him, and turned him about, and said unto the people that followed him, I say unto you, I have not found so great faith, no, not in Israel.

In Matthew:
10 When Jesus heard it, he marvelled, and said to them that followed, Verily I say unto you, I have not found so great faith, no, not in Israel.
11 And I say unto you, That many shall come from the east and west, and shall sit down with Abraham, and Isaac, and Jacob, in the kingdom of heaven.


In both versions, Jesus marvels at the fact that a Centurion, a Roman, a Gentile, had such a strong faith in him, stronger than any of his own people. It has nothing to do with the Centurion's devotion to authority or whatever. I know you'd love to find a verse in which Jesus approves of your Christ-fascism, but this one ain't it. Neither are any of the others. Because Jesus was not some authoritarian theocrat. 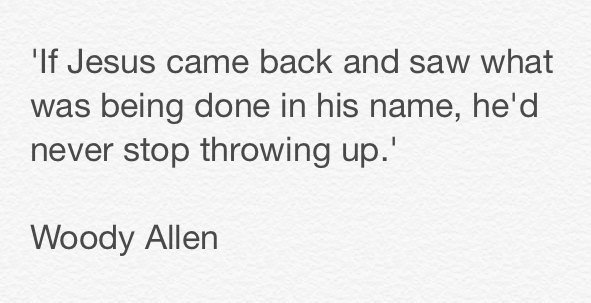 Posted by Professor Chaos at 9:20 PM 3 comments: Links to this post