I swear to God, the more I learn about Ted Cruz's family, the more they creep me out!

So apparently, the entire Cruz family is baboon-ass crazy.

I mean, I get why Ted is disturbed. He was raised by this lunatic: Explaining why she is supporting and campaigning for her husband, Heidi Cruz said "we are at a cultural crossroads in our country" and that she feels she and her husband "can be in this race to show this country the face of the God that we serve."


What the hell does that even mean? The face of God?

For one thing, maybe Heidi ought to brush up on Exodus chapter 33: 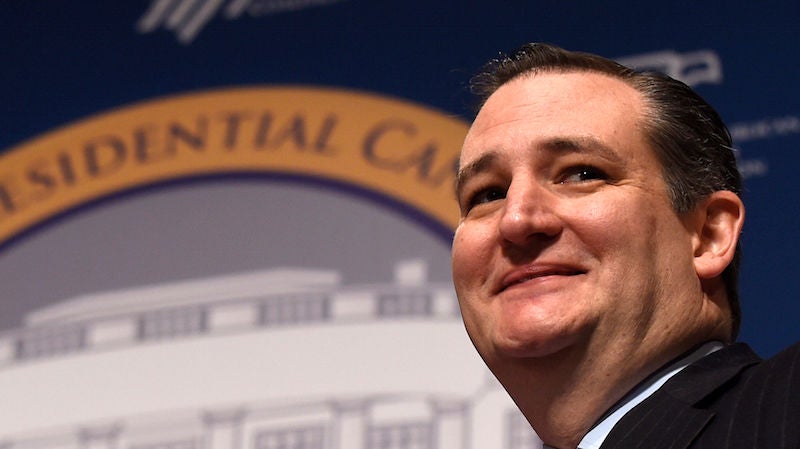 Honestly, after looking into that mug, I'm not sure I want to live.

Also, that's not the way that a woman talks about her husband. That's the way an acolyte talks about a cult leader. It's the sort of thing you would have expected a Branch Davidian to say about David Koresh. It's not what you'd ever think you'd hear anyone saying about the junior senator from Texas.

"[T]his Christian God that we serve is the foundation of our country, our country was built on Judeo-Christian values, we are a nation of freedom of religion, but the God of Christianity is the God of freedom, of individual liberty, of choice and of consequence."

Okay, first of all, Chtistianity is a monotheistic religion. There's no need to talk about "this god that we serve" or "this Christian God." If you are a Christian, there exists but one God. You don't have to differentiate Him from any other gods.

Second, it's nice to know that your god is pro-choice. I guess his views have evolved on that subject?
Just curious, does the "individual liberty" that your god advocates include the liberty of two men or two women to marry? Because if not, I'm not sure he really deserves the title "God of Freedom."

She went on to say that, "I think that’s something that this country really needs to be reminded of, is that Christians are loving people, are nonjudgmental people, but there is right and wrong,

Although, to be fair, there are loving, non-judgemental Christians out there. They do exist. they're called Quakers. But there aren't nearly enough Quakers in the world.

Although, I guess we could've done with one fewer.

". . . there is right and wrong, we have a country of law and order, there are consequences to actions and we must all live peaceably in our own faiths under the Constitution. And Ted is uniquely able to deliver on that combination of the law and religion."


Oh, fer fuck sake. . . You know he's running for President, right? Not Pope? President of the United States?  A job which not only has no "religion-delivery" aspect to it, but which is forbidden by the Constitution you supposedly love so much from advocating for religion at all? You really don't get that?


Right Wing Watch, which first reported Cruz's comments, notes that Cruz’s father Rafael has implied Ted Cruz "was chosen by God for the White House," and said his so is "running for president to 'share the love of Jesus Christ' with “every person in America.'"


Jeezus, this isn't a family. It's a goddamm cult.


Posted by Professor Chaos at 8:17 PM 10 comments: Links to this post