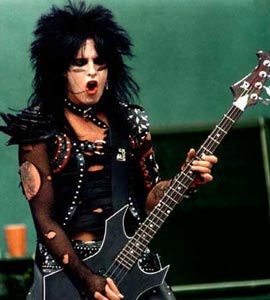 There are two people in the world who spell their name "Nikki."
One of them is the governor of South Carolina.

SC governor defends Confederate flag at Statehouse: Not ‘a single CEO’ has complained

Wait, that can't be right, can it?

“What I can tell you is over the last three and a half years, I spent a lot of my days on the phones with CEOs and recruiting jobs to this state,” the governor noted. “I can honestly say I have not had one conversation with a single CEO about the Confederate flag.”

Nikki, bubula, you're not supposed to say things like that out loud. You're supposed to pretend that you give a shit about the opinions and feelings of people, even those little non-CEO people, um what do ya call 'em. . . oh, yeah voters!

Okay, so that was one slip. I'm sure everything else she had to say was about very serious ideas and. . .

Haley said that she had tried to improve the perception of the state by ordering employees to answer the phone with the phrase “it’s a great day in South Carolina.”

That's how you improve your state's image? By having your employees recite some bullshit tagline when they answer the phone? Do you really imagine that anyone is calling the state, hearing "It's a great day in South Carolina" and thinking "it is? Well, heck I'm a gonna bring my whole durn business down thar if the days are really that great! It's rainin' cats & dogs up here in North carolina, Im a headin' down south right now! Pack up yer things, ma - we'se a movin!"

This is like how Chic-Fil-A makes their employees say "it's my pleasure" every time the serve a customer. * No one believes them. Everyone knows they're being forced to say that. It's not like customers are thinking "oh, it's her pleasure? Well, shoot then I guess I don't feel so bad about the miserable minimum wage in this state. If I'd  only known that this cashier is doing this job for her own enjoyment!"

But, really, even if people are fooled by your employees insincere catchphrase, do you really thin that erases the history of slavery and racism that the Confederate flag represents? Don't you think that even with this exercise in P.R. genius, people might still be reminded of the more shameful parts of your state's history when they see that flag?

“But we really kind of fixed all that when you elected the first Indian-American female governor,” she insisted. “When we appointed the first African-American U.S. senator, that sent a huge message.”

You stop that, Judge Judy! Stop laughing! Nikki Haley is not to be laughed at. She is a very serious person!
Just as serious as Very Serious Person #2:  Jeb Bush.

Jeb Bush does not currently hold a position of responsibility, but he used to be Governor of Florida and has, well not exactly thrown his hat into the ring, but he is holding his hat in his hand and pacing around the ring waiting for someone to finally ask him to throw it in.

You can tell how serious Jeb is just by his answer to this question about an actual important issue:

You know, I'm sure that there are a lot of folks out there who don't know what the Paycheck Fairness Act is. But none of those people is qualified to be the President of the goddamned United States of America!

Progress Michigan: The Paycheck Fairness Act is a piece of legislation that would ensure women receive the same pay as men...equal pay for equal work.
Bush: Equal pay for the same work, not for equal work—I think that's the problem with it. I think there's a definition issue.

Whoah! Hold it right there!

Progress Michigan: So you don't think Secretary Land should support it?
Bush: I don't know. You'd have to ask her.

Really? You'd have to ask Secretary Land what YOUR OPINION is on whether she should support the Fairness Act? Now that's a serious thinker! No wonder he's considered "the smart one."

George was "the cute one." Neil was "the mysterious one."

And of course, no discussion of very serious people could be complete without
Very Serious Person #3: Louie Gohmert

Discussing the very serious subject of the miniscule possibility DEAD CERTAINTY!!! that there could be an Ebola pandemic in the US, Gohmert offered this analysis:

“You know, it’s a shame that the CDC head, Frieden, is apparently the commander of the Democrats’ new war on women nurses,” Gohmert opined. “Because, goodnight, they set them up, and then they throw them under the bus.”

Now, not being a very serious person myself, I really don't understand what the fuck any of this is supposed to mean, but apparently the head of the CDC, at the behest of the Democratic Party, is purposely infecting nurses with Ebola? Because the Democratic Party hates women nurses? I guess that makes sense, I mean why wouldn't the Democrats hate a group made up largely of women who are union members?

“The idiot comes out and says that clearly she had violated protocol,” the Texas congressman continued. “At least in football, they have to tell you what you violated.”

Umm. . . okay. Football. Sure. That just could not be more germane. Whenever anyone doesn't behave the way a football referee would, it's safe to say that person is an idiot.

And on that note, I think that's about all the very serious people I can take right now.

*Yes, I used to eat at Chic-Fil-A. No, I don't any more. They say they've stopped contributing to anti-gay groups, but the damage has been done. To my arteries.