About this time each year, the FOX crowd starts trotting out their "War on Christmas" bs machine. Oh, they will fight to the death to defend Christmas from the imagined "attacks" it faces from people who, um. . . are willing to acknowledge that some people celebrate other holidays?

Or folks who want to maintain the separation of Church and State?
Oh no,  wait, I mean INFIDELS!!!! AMERICA-HATING INFIDELS!!!!!


And every Spring they pretend there's a "War on Easter" to be fought.

Heck, they've even discovered a "War on Halloween" Even though the only people who tend to object to Halloween are evangelical Christians who object to the holiday's pagan roots and scary "occultic" overtones. In other words, FOX news viewers.

But what about Thanksgiving?

Because Thanksgiving is actually under attack by the obscene spectacle known as "Black Friday." People are actually having their Thanksgivings taken away from them by stores who now not only insist that their employees be at work before the crack of dawn the day after, but now don't even close for Thanksgiving itself.

Where is the outrage on the right?

Why does the "pro-family" crowd raise no objection to people being deprived of family time in the service of feeding America's frenzy of acquisitiveness and materialism?

What's a bigger affront to holiday tradition, a cashier wishing you "Happy Holidays" or having a Thanksgiving that goes like this:  "Gee, Grandma, everything smells so good, you've really outdone yourself this year. . . well, got to go sell some cheap electronics or I'll be unemployed. See you at Christmas hopefully!" 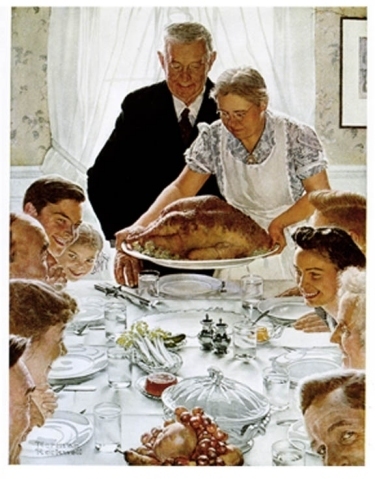 Well, time for me to go.  Those remote control drones aren't going to sell themselves!

Every year it gets worse and worse. The entire concept of "Black Friday" is grotesque enough to begin with. Once the term "Black Friday" went from being backroom retailer jargon to part of the everyday lexicon of normal people, we lost a part of our national soul. Once flyers began proudly announcing "Black Friday Sales!" we as a society should have stood up and said "No! We will not create a holiday based on celebrating your corporate profitability!" But we didn't. We allowed this indignity to infect our culture and it quickly spread like a cancer.

First it spread to Midnight of Thanksgiving day. Which of course meant that store employees were forced to leave their families by 10 or 11 that evening.

Then the stores began opening earlier and earlier Thursday evening until they got to the point where many stay open the entire holiday. As if it were just another day to make sales.

So where are the FOX News special reports on the "War on Thanksgiving?" Why does the one holiday that is actually under attack not see the same umbrage raised  as those holidays whose attacks are pure fiction?

Could it be because this war is being waged by large powerful corporations in the interest of increased profits? Instead of by "secular humanists" or whichever right-wing bogeymen are launching the imaginary wars on other holidays? Nah. . . couldn't be.