The funniest picture of the campaign season so far. 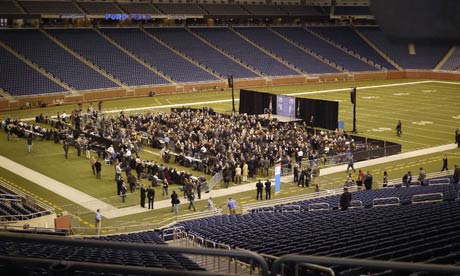 Members of the Detroit Economic club gather to hear a speech by Mitt Romney at Ford Field in Detroit. Photograph: Scott Olson/Getty Images

BAHAHAHAHAHAHAHAHAHAHAAAAAA!!!!!
How in the hell does this happen at this level?
Who books a 65,000 seat stadium for a speech that's going to draw maybe a thousand people? You could have held this event  in a high-school multi-purpose room and looked fine. But instead, you say to yourself, "I'll bet at least 40 or 50,000 people are going to want to come hear Captain Boredom talk about economics, better book Ford Fuckin Field!"  What a maroon!

Could Newt Gingrich really be a sociopath? Well, let's see. Here is a list of symptoms, let's see if he fits the profile:
(source)

Glib is one of the first words that comes to mind when describing Gingrich. I don't find him especially charming, but whatever charm he has is certainly superficial. 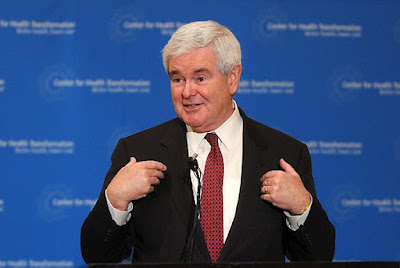 
They never recognize the rights of others and see their self-serving behaviors as permissible. They appear to be charming, yet are covertly hostile and domineering, seeing their victim as merely an instrument to be used. They may dominate and humiliate their victims.

He definitely saw his first wife as an instrument to be used. She put him through school, then he abandoned her for wife # 2.

Grandiosity, thy name is Newt. In one of the earlier debates, Gingrich answered charges of grandiosity by claiming that he would build a permanent base on the moon.


No one lies more coolly or easily than Newt. He lies constantly and confidently. He says demonstrably false things not only as if they were true, but as if everyone knows them to be true, as if they were obviously true. Makes ridiculous claims like having been paid millions to work as an historian when he must know full well that no intelligent person would believe them, and he does it pompously. It's almost impressive.

Yup!
I don't know about gambling, but promiscuity?


Unable to empathize with the pain of their victims, having only contempt for others' feelings of distress and readily taking advantage of them.

What could be more callous than serving your first wife with divorce papers in the hospital? Maybe saying this to your second wife: 'Yes, but you want me all to yourself. Callista doesn't care what I do.' That also shows what a hugely inflated ego Newt has. To basically say to your wife "how could a mere mortal woman like you expect to have a great man like me all to herself? No one woman could possibly be enough for me!"  Grandiose sense of self? Yup! 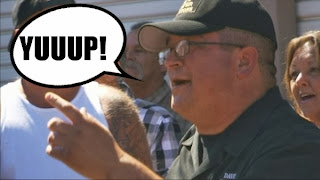 Does not accept blame themselves, but blames others, even for acts they obviously committed.

Whenever Newt looks bad, he immediately blames the press, blames "gotcha" questions, nothing is ever his fault. At least once, he did this pre-emptively:
"any ad which quotes what I said on Sunday is a falsehood."

The theoretical ads haven't even been made yet, but already Newt is claiming that they are lying by QUOTING HIS OWN WORDS!

So, is Newt Gingrich a sociopath? Well, I'm not a psychiatrist, but YUP!
Posted by Professor Chaos at 8:35 PM 1 comment: