Don't let the door hit you on the way out, ya nut, ya. 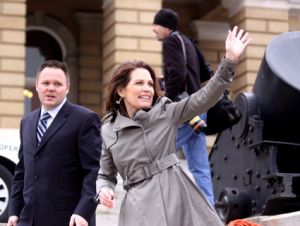 What better way for Michele Bachmann to show her love for 'Murica than to leave and bring her wingnuttery to another country. I would have suggested Pakistan or China, or some other country that has it comin', but I'll take it.

"Congresswoman Bachmann's husband is of Swiss descent so she has been eligible for dual-citizenship since they got married in 1978," spokeswoman Becky Rogness said in a statement.


"Also, because of her husband, she is eligible for citizenship in closetland," she did not add.

"However, recently some of their children wanted to exercise their eligibility for dual-citizenship so they went through the process as a family."


Oooohh, now it makes sense. Her children are so embarrassed that they want to flee to another country. Well, can't blame them there.