Bryan Fischer, formerly the executive director of the Idaho Values Alliance, is the host of the daily 'Focal Point' radio talk program on AFR Talk, a division of the American Family Association.

He must be. Why else would he be so obsessed with gaiety?

Seriously, look at the list of his recent columns:

If homosexuality were against the law
Bryan Fischer
February 5, 2010

Why homosexual behavior should be against the law
Bryan Fischer
February 3, 2010

Let's take a look at one of these recent columns:


If homosexuality were against the law

Laws proscribing homosexual conduct can be found in the Middle Assyrian Law Codes dating back to 1075 BC. . . which gives the lie to the myth that only blue-nosed prudes who believe in the Judeo-Christian tradition have ever found fault with sodomy.

Well, if it's good enough for the ancient Assyrians, it's obviously relevant to 21st Century America.

Here are some other laws the Assyrians had back then that Brian Fischer might like to bring back: (source)

Unless it is forbidden in the tablets, a man may strike his wife, pull her hair, her ear he may bruise or pierce. He commits no misdeed thereby.

If a man bring his hand against the wife of a man, treating her like a little child, and they prove it against him, and convict him, one of his fingers they shall cut off.

If a man have intercourse with the wife of a man either in an inn or on the highway, knowing that she is a man's wife, according as the man, whose wife she is, orders to be done, they shall do to the adulterer. If not knowing that she is a man's wife he rapes her, the adulterer goes free. The man shall prosecute his wife, doing to her as he likes.

Every state in the Union at the time of the Founding had laws
which made homosexual behavior illegal.

Sodomy was a felony offense in all 50 states as recently as 1962, and was still a felony in the other 49 states ten years later. Still today, 12 states have sodomy statutes on the books, although our meek acquiescence to judicially activist rulings from the Supreme Court have rendered those unenforceable.

Our "meek acquiescence?" Seriously? If the Supreme Court makes a decision you don't like, you're supposed to, what, just give them the finger and continue to enforce the unconstitutional law? George Wallace would be proud.

The fact remains, however, that in nearly 25% of the states in the Union, sodomy is still in the criminal code as illegal behavior.

And in Ohio, it is still illegal to get a fish drunk.

In Texas, the Encyclopedia Brittanica is illegal.

In Atlanta, GA it is illegal to tie a giraffe to a lamppost. (source)

This raises the question, then, as to whether sodomy laws should be, or legitimately have been, repealed just because they are rarely enforced.

The answer to this is a clear and unequivocal "No."

Right. Anti-sodomy laws have been and should be repealed because they are unconstitutional, stupid, and just plain wrong.

Gays in the military: problem solved. We shouldn't make a place for habitual felons in the armed forces. End of discussion, end of controversy.

I'm sorry, what?
So, if Truman had just made being black illegal, he could have avoided integrating the military. Controversy avoided!

What the Hell was I thinking?

Gay marriage: problem solved. We should never legalize unions between any two people when the union is forged specifically to engage in felony behavior. Would we sanction, for instance, the formation of a corporation whose stated purpose was to import illegal drugs?

Which is totally the same thing. Two same-gendered people spending their lives together is exactly like selling poison to children and destroying lives and sometimes killing people.

Gay indoctrination in the schools: problem solved. We don't want to raise a generation of schoolchildren to believe that felony behavior is perfectly appropriate. That's why we spend so much money warning students about the danger of drugs

Actually, the indoctrination problem is already solved, in that it never existed.

And why the drug comparison again? Is it because you find gay sex with men so addictive?
Are you in a 12-step program to kick your penis addiction?

Hate crimes laws: problem solved. We wouldn't throw a pastor in jail for saying that illegal behavior is not only illegal but also immoral. For instance, he's free to say that murder is not only contrary to man's law but also to God's law. End of the threat to freedom of religion and speech.

Oh, to be free to hate! But wait a minute. . . we already are free to hate. On Sunday mornings all across America, despicable ministers will be railing from the pulpits about the evilness of the gay people. If pastors could be thrown in jail for being hatemongers, wouldn't Fred Phelps be doing hard time?

This list could actually be extended, but you get the point. Laws not only curb dangerous and risky behavior, they keep such behavior from being normalized, sanctioned and endorsed by the rest of society, and as such render an enormous benefit to a healthy culture.

If by healthy, you mean repressed men and women living lives of misery and lies, then yeah. healthy.


So, it seems safe to say that Brian Fischer is totally gay. 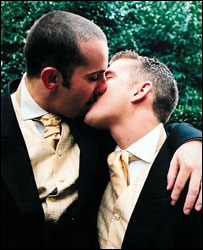 There. That's how gay Brian Fischer is.

For the record, I have no objection to Brian Fischer's gaiety, or anyone else's. I object to his being a self-loathing asshole.

Posted by Professor Chaos at 6:20 PM 2 comments: Links to this post

This New Hampshire Lady is Creeping Me Out