Jerk of the Day

This is really stunning, even for a horse's ass like John Thune:

I mean, where would you get the gall to make a statement like that?
You and your party are trying to get these subsidies killed and you're complaining that you might succeed?

That's like John Dillinger complaining about the lax security at the local bank.

Or Josh Duggar complaining that his sisters' romms don't have locks on their doors.


It's like someone slashes your tires then says "see, I told you that car wasn't reliable!"


Posted by Professor Chaos at 7:46 PM 2 comments: Links to this post

It Must Be Hard to be a FOX News host.

It must be difficult working for FOX. It's got to be a tough tightrope to walk, being racist enough to keep your octogenarian Archie Bunker core audience happy, but leaving yourself enough plausible deniability to be able to claim "I wasn't being racist!" "Hey, all I said was that the guy was a ghetto thug from the 'hood who was probably smoking crack. I never said anything about him being black!"

Megyn Kelly Defends Texas Cop: 'The Girl Was No Saint, Either'

She was "no saint?" Since when is that the point? Since when is being a "saint" a pre-condition for expecting decent treatment from police?

“The girl was no saint, either,” Kelly said of Dajerria Becton. “He had told her to leave, and she continued to linger. When a cop tells you to leave, get out.”


Oh. Oh, she lingered? SHE LINGERED? Why didn't you say so? Throw the book at her. Lingering! What is wrong with the youth of today?

Kelly also told her guests, former Los Angeles Police Detective Mark Furhman and radio host Richard Fowler, that the incident had been turned “into a race thing,” and wondered whether it was justified.

Um, I gotta say. . . if you have Mark Fucking Furhman as a contributor on your network, you're not even trying to veil your racism anymore.

Idiot of the Day

Look at this idiot: 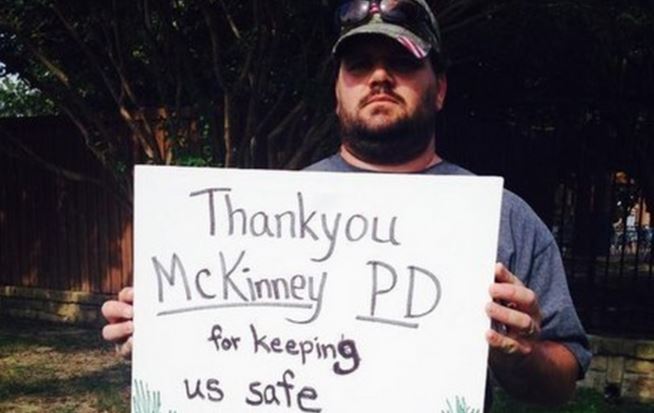 Safe!
The police managed to somehow keep him safe!

The heroic McKinney cops managed to keep this grown man safe from her: How are you not ashamed?
How can you stand there, in public, thanking the police for protecting you from a 14-year-old girl in a swimsuit?
Don't you have any shred of dignity?