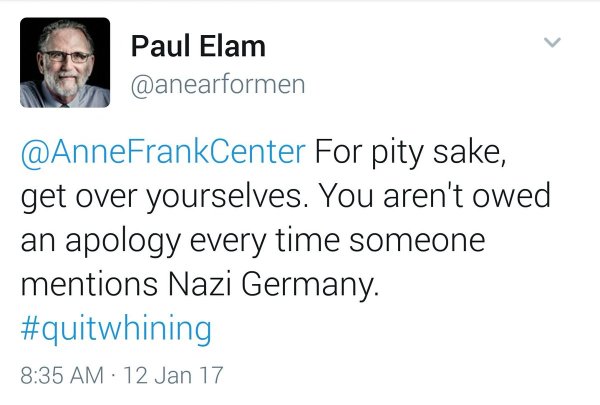 This from a "man" who thinks he's owed an apology every time a rapist gets arrested.

Oh, but I left out the context.  The Anne Frank Center sent out a tweet pointing out that Donald Trump comparing his tribulation of being mocked on social media with the actual, literal slaughter of millions of Jews was, to say the least, in bad taste. 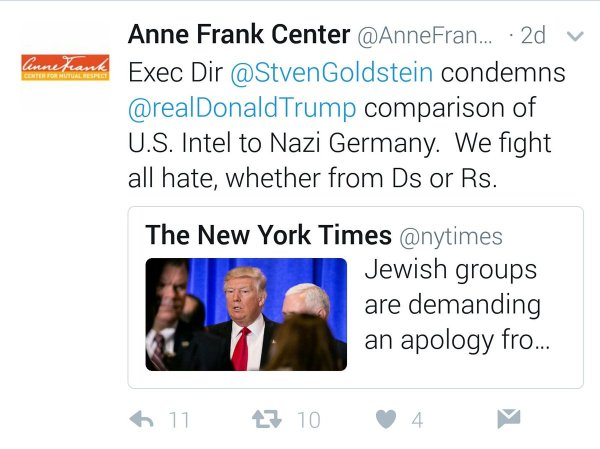 And this sniveling little manbaby saw their tweet and. . . was offended? I guess? Because it's been like 50 years or whatever and Jews still haven't gotten over it?
Which is ironic since Elam still hasn't gotten over the trauma of being made to take medicine when he was sick.
Seriously


Men’s rights activists often cite the first time they realized it’s a woman’s world. They call these “red pill” moments, after the scene in The Matrix when the main character is faced with the decision to swallow a red pill and recognize the true nature of the world or take a blue pill and continue living a lie. For Elam, that revelation came at age 13, when his mother tried to force him to take his diarrhea medicine.
Elam’s brothers held him down on the kitchen floor while his mother screamed and hit him with a wooden spoon until a concerned neighbor knocked on the door. “I felt like I was engaged in the battle of my life,” Elam said. “I was a rebel from that moment on … I’m still that 13-year-old kid on the floor that won’t take the medicine.”
: https://www.buzzfeed.com/adamserwer/how-mens-rights-leader-paul-elam-turned-being-a-deadbeat-dad?utm_term=.gm8llv2Mq#.dc7XXLo5e


Thirteen? You were thirteen? Who has to be forced to take medicine at thirteen? By thirteen years old, most people have a rudimentary understanding of the relationship between the taking of medicine and no longer being sick. Why would you refuse to take medicine? Was it the unpleasant taste, or did you just hate the idea of no longer shitting yourself?

Several years ago, we were at our friends' for some occasion when they had to give their 4-year-old daughter some medication. This small child stated for the record "medicine yucky," then opened her little mouth and swallowed the medicine because that tiny pre-school-aged child understood that she would be sicker without it. Now I know that girls mature a bit more quickly than boys (sorry, misandry alert!) but how the fuck do you not make that connection at thirteen?

This is not a story you should tell. This is more like a story that your mom should tell when she's saying "Jesus, I tried to make him into a normal fucking person!"


The CNN reporter who was disruptive to the press briefing, & disrespectful to Trump-should be fired & prohibited from any press briefings.
— Randy Weber (@TXRandy14) January 12, 2017

Holy shit, that is really alarming. This is how it starts. When someone who is not just some idiot with a Twitter account, but an actual member of the federal government, believes that a member of the fourth estate should be punished for daring to disrespect the dear leader, that is a big step down a very dark road.

And forget about the rank hypocrisy of a member of a party that spent 8 years disrespecting, insulting and obstructing the current President, this is disquieting in and of itself. No authority figure, including the President, ESPECIALLY the president, is above criticism. That is one of the core American principles, that you are allowed to criticize, condemn, or denounce the President or the mayor, or the governor, or anyone. And there can be no consequences, other than being criticized, condemned or or denounced oneself.

I had more, but the computer keeps freezing up, so I'm taking that as a sign to go to bed.


Posted by Professor Chaos at 7:46 PM 2 comments: Links to this post