84 years ago today, one of the all-time greats in the history of American pop music was born.

Chuck Berry will always be remembered for the "duck walk" and the signature riff, but he never does get enough credit as one of the all-time great songwriters.

That's why EVERYONE covers Chuck Berry:


“If you had to give rock’n’roll another name, you might call it Chuck Berry” -John Lennon
“Why should I write songs when Chuck Berry wrote them all?” -George Thorogood
Posted by Professor Chaos at 8:41 PM No comments:

From the Las Vegas Sun:

Here is Sharron Angle speaking to a group of Hispanic students:

"So that’s what we want is a secure and sovereign nation and, you know, I don’t know that all of you are Latino. Some of you look a little more Asian to me. I don’t know that. [Note: it's the Hispanic Student Union. The whole room is Hispanic teenagers.]

Because if you want to win over a group of minorities, your best bet is to go with some variation of "Ah, I can't tell any of you apart!"

UPDATE: The Angle campaign says she made that remark about being the first Asian legislator because "a reporter thought she looked Asian."

Has no one in Nevada ever seen an Asian person?

It's not that difficult. Check it out: 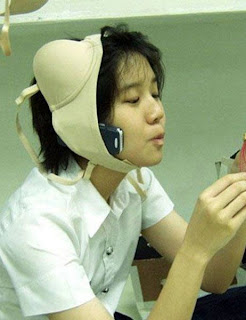 
I suppose at this point, Angle should get points for not pulling at the corners of her eyes and chanting "Ching chong, me love you long time!"

UPDATE: Crooks & Liars has the video:

She's even stupider than I thought!
Posted by Professor Chaos at 5:00 PM 1 comment: