Kathleen Parker is Not a Witch. But she is Awful.

In an apparent attempt to accelerate its downward plunge from respectability, the Atlanta Journal Constitution has started running the syndicated columnist Kathleen Parker. I don't know what we did to deserve this. Her most recent turd of a column ran under the headline

Sisterhood's Perils: Women as dumb as men
and it opens with this line from MacBeth:

- Fair is foul, and foul is fair. There's something witchy in the air.

because you can't dicscuss women in politics without a bunch of "witch" references! That would just be silly! "I am not a witch," insists Delaware Senate candidate Christine O'Donnell in an ad that forever will provide the exclamation point on a bewildering political season. Not since Salem have we witnessed such witchification of women who dared stray from the cauldron of the sisterhood.

There are so many things wrong with that 2-sentence paragraph one hardly knows where to begin.
Perhaps one might begin by pointing out that NO ONE has accused Christine O'Donnell of being a witch. No one has "witchified" her. The only person who brought up witchery in relation to Christine O'Donnell was Christine O'Donnell. Parker's implication seems to be that O'Donnell was treated as a witch or subject to "witchification" because she dared to break with I don't know, feminist orthodoxy or something which has upset the feminists who are, of course, the real witches. To sum up, how dare you call someone a witch? Now get back to your cauldron, you hags!

The only way Parker's above paragraph would make any sense is if she saw the "I'm not a witch" ad, had no idea to what O'Donnell was referring, was too lazy to google "O'Donnell + witch" and just assumed that someone must have accused her of witchery, else why would she feel the need to deny being a witch? And since O'Donnell is a right-wing-nut, it must have been those darn feminists, that "cackle of rads" who were responsible! That's just journalism101!

Now, we hear, female candidates aren't witches after all. Too rhymey with the B-word in these enlightened times.

Yeah, that's why. It's not because witches don't exist (at least not the cackling, cauldron-stirring spell-casting brides of Satan type of witches. I don't know whether Wicca priestesses refer to themselves as witches, can anyone enlighten me?) But yeah, it turns out that female candidates aren't witches for the sole reason that the word "witch" is too close to "the B-word." That's the reason. Although I would suggest you consult with the secretary of State as to how reluctant commentators are to use the "B-word" in reference to female politicians.

Do some of the women running on the GOP ticket make us cringe with embarrassment? Let me answer that question with a 2007 quote from O'Donnell:

"American scientific companies are cross-breeding humans and animals and coming up with mice with fully functioning human brains."

No! Not indeed. What does O'Donnell's nuttiness and ignorance have to do with witches? Why even throw that in there? You've already impressed us with your familiarity with MacBeth, you don't need another quote. Alas, it is not the first time a political candidate has become befuddled by facts beyond their ken. To which fact one hastily adds: Female and male.

Although it probably is the first time any candidate has said anything that bizarrely insane and still been considered a serious candidate.

. . . men and women can be equally dumbfounded and equally "mean," if in sometimes gender-tilted ways. What is gratifying about this season is that we have enough women running that we can criticize them without resorting to the old catfight canard.

Yes, we can skip over the old "catfight" canard and go straight to the "coven of witches" trope. I can't wait 'till we move on to the "harpies" meme or the "Medusa" allusion! 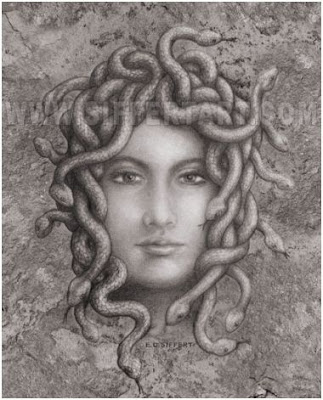 Some women, just like some men, are simply unqualified and should be "refudiated" on their merits or the lack thereof. That Queen Bee Sarah has led the hive of busy benefactors, meanwhile, should be cause for a celebration of sorts

How so? What is there to celebrate about this development? Palin has made it easier for women to be taken seriously as political candidates as long as they are inane, insane, and abstain in vain?

That Queen Bee Sarah has led the hive of busy benefactors, meanwhile, should be cause for a celebration of sorts -- and would be if the brewing brood were Democrats.

Really? Seriously? That's what you're going with? You're gonna stick with that, then? If a Democratic woman had threatened "Second Amendment Remedies," another democratic woman had claimed that Hezbollah agents were traveling to Mexico, learning Spanish and jumping the border, and a Democratic woman had claimed that the CIA was performing secret experiments on the people of Kansas, that would be a cause for celebration? Willfully ignorant, empty-headed lunatics being taken seriously as candidates for high office should not be celebrated no matter the lunatics' party affiliation, gender or whatever. We already have enough brain-dead loonies in positions of responsibility.

. . . and would be if the brewing brood were Democrats. Why, a swell of liberal women threatening to take over the Congress with tough, manhood-withering talk would have the sisterhood in cackles.

Again with the cackles?

It is a testament to feminism that we have so many female candidates.
Of course, that's not going to stop me from trashing those darn feminists!
Freakin' witches!

Posted by Professor Chaos at 5:44 PM No comments: