Who My Audience is

These are the search terms that bring people to my silly little blog:


Search Keywords
Posted by Professor Chaos at 7:19 PM 2 comments: Links to this post

Things May be looking Up

1. The "Million Mom" boycotts have been utter, thudding failures. First they tried to pressure J.C. Penney into dropping Ellen DeGeneres. Then, they tried to start a boycott of Toys 'R' Us because they were selling an Archie comic book featuring a gay wedding. And J.C. Penney and Toys 'R' Us and whoever publishes Archie Comics said basically "nope. No thanks." Not only didn't they cave, they didn't even feel the need to pretend that the Million Morons had some kind of point, or that their complaints were valid and were being considered carefully. They just said nope! We like Ellen. If you hate her, that's your problem.
The CEO of Archie Comics issued this statement:

We stand by Life with Archie #16. As I’ve said before, Riverdale is a safe, welcoming place that does not judge anyone," he said. "It’s an idealized version of America that will hopefully become reality someday. We’re sorry the American Family Association/OneMillionMoms.com feels so negatively about our product, but they have every right to their opinion, just like we have the right to stand by ours. Kevin Keller will forever be a part of Riverdale, and he will live a happy, long life free of prejudice, hate and narrow-minded people." Yeah, "prejudice, hate and narrow-minded people."  The CEO of Archie Comics called an asshole an asshole. No need to pretend that the assholes are anything but assholes. Good on him!
2. Soledad O'Brien pushed back against one of Breitbart's flunkies.


Finally, someone from the corporate media, and from the Cowardly News Network, no less, calls bullshit on right-wing liars instead of just accepting their bullshit at face value. Unfortunately, no one did this when Breitbart was still alive. Every time he put out some phonied-up piece of video, the media acted like he was Captain Journalism with the Super Scoop, and someone lost their job. This interview may go down in the annals of journalism as the moment when CNN finally started to grow a pair and call a lie a lie. I don't necessarily hold out a lot of hope that this is going to become a pattern, but maybe.

3. Advertisers are FINALLY leaving Rush Limbaugh's horrible hate-fest of a radio show. They are pulling their ads in such large numbers that some stations have actual dead air during commercial breaks (not the good kind of Dead Air)


There were four separate instances during this afternoon’s broadcast on WABC 770 AM in New York City where the network fell silent. During the lead in to the show, two and a half minutes of silence was broken up by a single, solitary ad before Limbaugh hit the air. Then, towards the end of the first hour of Limbaugh’s three hour program, a public service announcement was followed by an additional minute of silence before Limbaugh returned. Another minute of dead air came in hour two, and a fifth minute in hour three followed that.

I know, I know Rush is never ever going to be driven off the airwaves. There will always be enough gas-huffing troglodytes to keep his show on the radio. But at least maybe he might get taken down a notch? Down maybe to the point where sitting congressmen don't feel the need to kiss his ass? (looking at you, Phil Gingery!) 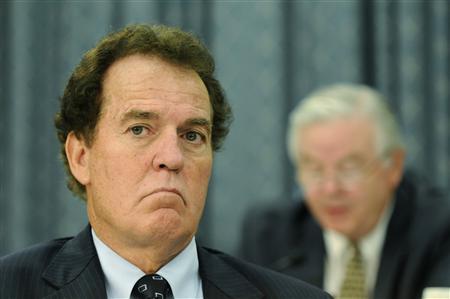