Stupid club for weiners breaks up

Katie Jerkovich
The secret group for conservatives in Hollywood called Friends of Abe has notified members its organization is coming to an end, at least the way it stands now. And some say it’s because of internal fighting over Donald Trump.


Yeah, they're not kidding. A secret society!

Conservatives are so invested in their persecution complex that they actually pretended that they had to meet in secret like ancient Christians in the catacombs.

And we all know how secretive those folks are about their political beliefs!

Quoting from "Fight Club" is like wearing a sign that says "I'm a douchey fratboy who thinks I'm deep!"

For a time it ran a tightly controlled Facebook page and banned members from talking to the press, taking pictures or tweeting at events

Because if anyone ever found out who they were, members might face completely no consequences at all!

“We will still get together for drinks and speakers, but we may reassess how we approach those events logistically. In short, FOA will return to its roots. It will be a passion project, like it was in the beginning ... We’ll still be a private organization that protects the names of our members at all costs.”

They're actually pretty serious about secrecy. If you click on the link to their website, http://friendsofabe.net/, you'll see this welcome message:

Welcome to Friends of Abe, the legendary “secret” organization of Hollywood conservatives. This is not the official Friends of Abe site. That site is unavailable to the public, and viewable only to members (members login here).

It was the one place where many of its members – actors, producers, writers and technicians – felt safe from liberal sneers and potential retribution.
“As a conservative, if you expressed your political views at work you would be weeded out,” said Jack Marino, a film-maker. “At Abe events we could get together over dinner and hang out with our own kind and speak freely.”

Really? Let's look at a couple of examples using members of your crappy club for jerks.
Let's start with Kelsey Grammer. Grammer never made any secret of his right-wing political views, so I'm not sure why he felt the need to join the secret conservative club, but whatever.

An active campaigner for the GOP, Grammer was a guest at President George W. Bush's first inauguration, campaigned for John McCain in the 2008 general election and endorsed Michele Bachmann for the Republican nomination for President in 2012.

And what consequences did he face after becoming well-known for his love of Dubya and John McCain? Well, in 2011, he got his own show.

The show only lasted two seasons due to low ratings and the fact that despite Grammer's acting talents, the show just wasn't very good.

the series had low ratings from the start, garnering just 659,000 viewers for its premiere and a season high of 440,000 viewers - a far cry from the 1.25 million viewers who tuned in during the first season of Starz’ other drama, Magic City.

Or, as Grammer put it:

'It may have to do with several things, honestly, but I think it’s possible, I mean, I am a, I’m a declared out of the closet Republican in Hollywood.'

Because when you're a Republican, nothing is ever your fault and you're always the victim!

And in 2010, he published this open letter to President Obama in the Washington Times:

President Obama:
You will be the first American president that lied to the Jewish people, and the American people as well, when you said that you would defend Israel, the only Democratic state in the Middle East, against all their enemies. You have done just the opposite. You have propagandized Israel, until they look like they are everyone’s enemy — and it has resonated throughout the world. You are putting Israel in harm’s way, and you have promoted anti-Semitism throughout the world.
You have brought this to a people who have given the world the Ten Commandments and most laws we live by today. The Jewish people have given the world our greatest scientists and philosophers, and the cures for many diseases, and now you play a very dangerous game so you can look like a true martyr to what you see and say are the underdogs. But the underdogs you defend are murderers and criminals who want Israel eradicated.
You have brought to Arizona a civil war, once again defending the criminals and illegals, creating a meltdown for good, loyal, law-abiding citizens. Your destruction of this country may never be remedied, and we may never recover. I pray to God you stop, and I hope the people in this great country realize your agenda is not for the betterment of mankind, but for the betterment of your politics.
With heartfelt and deep concern for America and Israel,
Jon Voight

What were the consequences of these bold acts of conservatude? Well, in 2013, he went from being the washed-up has-been from Anaconda and the "Baby Geniuses" franchise

to being one of the stars of Showtime's Ray Donovan, resurrecting his career and reputation.

So why was this secret club necessary? Who knows? I guess it's just more fun if you pretend you're doing something taboo and dangerous? But it's all over now, apparently because the members couldn't agree about Donald Trump. Seriously.  http://dailycaller.com/2016/04/22/hollywoods-secret-conservative-club-friends-of-abe-ends/


P.S. While searching for images of Christians in catacombs, I stumbled on to this fresco: 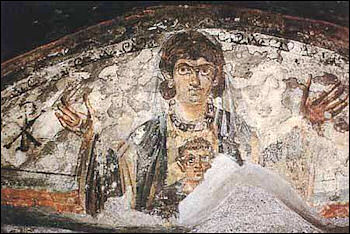 Is it just me, or is that John Oliver?


Posted by Professor Chaos at 8:44 PM 5 comments: Links to this post