So, Sandra Bullock Married This, huh? 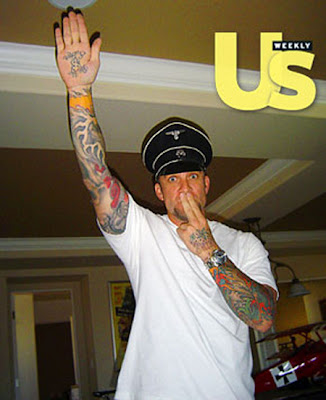 And would you be surprised to read this:

Adding another potential bombshell element to the sudden explosion of Sandra Bullock’s marriage, RadarOnline.com has learned exclusively that Jesse James has more than 12 homemade sex tapes.

The tapes Jesse made with other women are shocking. “Most of the tapes feature a mass amount of Nazi paraphernalia,” an insider tells RadarOnline.com. “It’s all really quite disturbing.”

So, what, did sandra Bullock lose a bet? Is she secretly awful? Maybe she thought she was getting this Jesse James:

Email ThisBlogThis!Share to TwitterShare to FacebookShare to Pinterest
Labels: Douchebagerry

Happy Birthday, Ya Nut, Ya!

Somehow I missed it, but won't you now join me in singing Happy Birthday? You're an embarrassment to the State of Minnesooootaahh. . . .

And by extension, the nation at large!

Posted by Professor Chaos at 8:58 PM No comments: