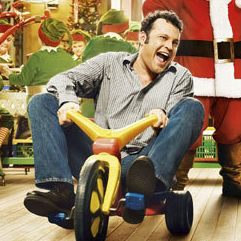 Vince Vaughn, who hasn't been good in anything since, what, Clay Pigeons? has apparently decided to cushion his slide into anonymity by auditioning for FOX.

On the American right to own a gun:
"I support people having a gun in public full stop, not just in your home.

wagging their dick-substitutes in fast-food restaurants, Target stores, and saloons. What could go wrong.

Also, Vince, we don't say "full stop" in this country. We say "period." Just because this interview is with British GQ doesn't mean you have to take on British affectations. You're not Madonna.


Um, no. It's pretty clear that we have the right to bear arms in order to form a well-regulated militia. I really don't get where this idea comes from, that the founding fathers wanted the people to be able to overthrow their government. They were the government. No one, not even the venerated founders, is so selfless as to say "when I'm President, I'm gonna make sure that the people have the means to violently overthrow me should I do something they don't like." It's idiotic!

It's the same reason we have freedom of speech. It's well known that the greatest defence against an intruder is the sound of a gun hammer being pulled back.


Well known? Well known by whom? Do you have anything to back up this absurd statement? Or is it enough to just claim that it's common knowledge, no evidence necessary? Also, I really don't see the connection to Freedom of Speech. Unless you're saying that the framers of the Constitution wanted people to be able to criticize the government, so they obviously must have wanted them to be able to commit violent insurrection?

All these gun shootings that have gone down in America since 1950, only one or maybe two have happened in non-gun-free zones. Take mass shootings. They've only happened in places that don't allow guns. These people are sick in the head and are going to kill innocent people. They are looking to slaughter defenceless human beings. They do not want confrontation.


As you say, these people are sick in the head. So, obviously, they're making the rational decision to seek out a "gun-free zone" in which to commit their atrocities. It just stands to reason that a murderous lunatic would use such a logical thought process!

In all of our schools it is illegal to have guns on campus, so again and again these guys go and shoot up these f***ing schools because they know there are no guns there.


No. No, no, no, you're wrong. The reason that so many of these shootings have occurred in schools is because mostly they are committed by people who are students at those schools, and they want to kill the people that they feel have wronged them. Even the Sandy Hook killer, who was obviously not a student at the pre-school, went to the school at which his mother worked.

Kip Kinkle, who shot up Thurston High in Springfield, Oregon had been expelled from that school. He didn't shoot up that school because it was a gun-free zone, he shot up that school for some sort of sick, twisted revenge fantasy.

Michael Carneal, who shot up heath High School in Paducah, KY was a student there.

Mitchell  Johnson and Andrew Golden were both students at the middle school that they shot up in Jonesboro, Arkansas.

Eric Harris and Dylan Kliebold were both students at Columbine High who wanted to kill the classmates they felt had disrespected them.


Banning guns is like banning forks in an attempt to stop making people fat.

Oh my God, I am so sick of stupid arguments like this. That analogy might make sense if we were constantly seeing headlines like "Toddler Finds Fork in Mother's Purse, Accidentally Force-Feeds Infant Sister to Death."
or
"Teen Accidentally Made Diabetic While Playing With Fork He Stumbled Onto In Parents' Room."

You know what I mean?

Taking away guns, taking away drugs, the booze, it won't rid the world of criminality."

And that's another argument I'm really really sick of. "getting rid of guns won't end crime, so there's no point." First of all, no one is trying to "get rid of guns." Most people support the right of law-abiding citizens to own guns for home protection, or sport, or what have you. The only restrictions even being discussed at all is that maybe we shouldn't have civilians carrying around military-grade assault weapons in public, and maybe if we could put a little effort into making it a bit harder for felons to purchase guns, please? So let's stop pretending that anyone, especially President Obama - black and scary though he may be- is comin' to take yer guns! And let's not pretend that sensible restrictions on gun ownership aren't worth doing if they won't prevent 100% of all violent crime in the world.