Palin's a couple days late with her Halloween costume.

Don't bother watching the video, it's more of the same tired Palin schtick although with more stammering and awkward pauses then usual. Just check out Palin's outfit.


The leopard print, the glasses, the absurdity. . . 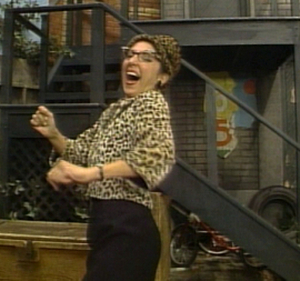 For those of you too young to remember Edith Prickley , http://en.wikipedia.org/wiki/Edith_Prickley
Posted by Professor Chaos at 9:52 PM No comments:

Tripod Jimmie was formed by Tom Herman, the original guitarist from Pere Ubu in 1981. Several years later, I stumbled on to one of their records in a cut-out bin, and bought it out of curiosity. One listen and I was hooked. There isn't a lot of their stuff online, but I did find a couple.


Posted by Professor Chaos at 4:01 PM No comments:

Family Research Council has No Sense if Irony


Republican Rep. Joe Walsh was the only Illinois congressman to be named a “True Blue” member of Congress for “unwavering support of the family” by the Family Research Council Action committee Thursday.

Which sounds reasonable unless you're one of those people who have ever heard of Joe walsh of know anything about him.

Walsh’s ex-wife says Walsh owes more than $100,000 in back child support for their three children. Walsh counters that he and his wife had a “verbal agreement” that he didn’t have to pay child support during years when he wasn’t earning as much.

"Hey, we said support of THE family, not support of HIS family," a Family Research Council spokesperson might have added.

What better way to support the family than making it harder for families to get medical care? Or how better to promote freedom by making sure that only some people are free to marry the person of their choosing? And what better example of faith than voting to end government funding for abortion within a bill which contains no government funding for abortion?  Imaginary crisis averted!
And de-funding Planned Parenthood? Considering that they are already forbidden to use any government funds for abortions, that's basically just making it harder for women to get lady-health exams, so yeah, you're kinda promoting the orphaning of low-income children. And THAT is how you support families. And faith, too, because I'm pretty sure it says in the Bible somewhere that "if a lady doth become sick, then she shall surely be left to die unless she shall have health insurance which verily shall be repealed by God-fearing congressmen. For verily I say unto thee, the unborn babies must be protected. Once they shall be born, they shall be on their own, and it shall be their own fault for not being born to more affluent parents, saith the Lord."

So, sure let's give an award to Joe Walsh for all the wonderful things he's doing for families. Yes, a few mothers may die young, and some children may die because their parents can't get insurance, but the important thing is that the gays won't be gettin' married on Joe Walsh's watch!
Posted by Professor Chaos at 3:45 PM No comments: