Demons are after your kids? In the TV?

Because, yeah, that horse isn't out of the barn!


(Oh, and I just noticed that this article is from back in June which shows you how carefully I monitor the activities of the FCC)

1.) The underlying federal criminal statute that prohibits indecency on the public airwaves is found at Title 18 U. S. Code Section 1464.  Have you read this law?
(“Whoever utters any obscene, indecent, or profane language by means of radio communication shall be fined under this title or imprisoned not more than two years, or both.”)

Imagine the kerfuffle had this been on the radio!
2.) Are you familiar with the FCC’s working definition of the term “indecent”?
(“Language or material that, in context, depicts or describes, in terms patently offensive as measured by contemporary community standards for the broadcast medium, sexual or excretory organs or activities.”)


Are you familiar with what contemporary community standards are? I mean, outside of Amish country. The standards of the community of Los Angeles
﻿
And do you think that "patently offensive" is a measurable standard?
adverb: patently
In order to be indecent, something has to be "offensive" by "community standards" in a way that is "clear and without a doubt." How is that going to be enforceable?
And it must portray sexual or excretory organs? I watch a lot of tv and I don't recall ever seeing any penises or vaginas being portrayed on any show.
(Oh, wait I forgot about OZ. My God, the penises!) 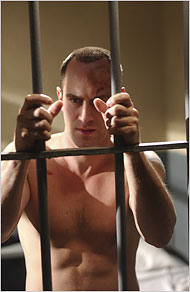 Detective Stabler! Put that thing away!
Anyway, if that is the definition of indecency, you have nothing to worry about. Until someone starts broadcasting a show called "Will's Penis & Grace's Vagina," I don't think there is anything on broadcast TV or basic cable that approaches the standard of "indecency."
Of course I could be wrong. Maybe the FCC's mission is a lot more serious than I thought. Maybe they are the only agency that could prevent demons from raping our children, which they totally are doing, obviously, duh!
Klingenschmitt: The FCC Is Letting Demonic Spirits
'Molest And Visually Rape Your Children'
Submitted by Kyle Mantyla on Thursday, 8/22/2013 10:38 am -
(via Right Wing Watch)

Citing a campaign launched by Morality In Media to ensure that Tom Wheeler, President Obama's nominee to head the Federal Communications Commission, will enforce decency standards, "Dr. Chaps" Gordon Klingenschmitt said on his "Pray In Jesus Name" show that demonic spirits are using lax FCC enforcement of these standards to "molest and visually rape your children."

See, I thought that TV companies put on risque' programming in order to make monies because they're running a business and don't really care who's offended as long as they're selling ad time, but no! It's demons! I should have known!

"Dr. Chaps" said that former FCC chairman Julius Genachowski failed to adequately enforce the decency standards during his time in office and that was because there was a "demonic spirit of tyranny or immorality inside of him."

And even though Genachowski outwardly appears very polished and successful, "the demonic spirit influences him to abuse and, dare I say, molest and visually rape your children.

You know, I think that if you're really serious about wanting to enforce decency standards on TV, I think the first thing you have to do is be realistic about who your nemeses are. You're going to have to go up against huge multinational media corporations who have unlimited resources and own more Congressmen than I own socks. It's not going to do you any good to pretend that it's "demonic spirits" who are to blame for shows you don't like. I don't think you have any chance of affecting the change you want, nor do I wish you luck in that endeavor, but if you're going to try to fight this battle, you at least have to take to a battlefield located in the real world.
﻿
Posted by Professor Chaos at 8:26 PM 3 comments: