Evan Dando of the Lemonheads performs "Waiting Around to Die"


And The One and Only:

Posted by Professor Chaos at 7:42 PM No comments: Links to this post

I can't tell if this guy is serious, if he's lying, or if he even knows that he's lying.
Let's look at a few excerpts from the CNN transcript, shall we?

HATCH: I don't know one Republican who does not want health care reform.

Okay. That's just ridiculous. Unless by "health care reform" you mean killing Medicare or privatizing the VA, then yeah, probably a lot of Republicans are in favor of health care reform. But actual reform? How do you sit there with a straight face and pretend that you haven't done everything in your power to derail reform? Why can't you just be honest and say "we're against health care reform, and here are the reasons why. . ." and then there could be an honest debate?

I don't know one Republican who would not try to work together with the Democrats.

Sure, because to you, working with the Democrats means the Democrats rolling over and giving you everything you want. And it's easy to see where you would get that impression, given the Democrats' recent history of lining up to be George W's prison bitch. So that's probably not technically a lie, it's just using a definition of the term "work together" that no one else would use.

We weren't involved in this process. We weren't even asked.

But here are a few highlights:

[An amendment] sponsored by Lamar Alexander of Tennessee, would "establish an auto advisory council to make recommendations to the Secretary of the Treasury regarding how best to represent the taxpayers of the United States as the majority owner of General Motors."

Seriously? That's what you have to add to the proceedings? An amendment that has nothing to do with the subject at hand? And that amendment is included in the final bill, and still Hatch is claiming there was no Republican involvement? Really?

An amendment from Mike Enzi of Wyoming promises "to protect pro-patient plans and prevent rationing." Another of his would "prohibit the government run plan from limiting access to end of life care."
And Enzi gets his two cents in, adding protections from imaginary threats. Good work, Senator! But you forgot the "no fire-breathing dragons" clause!

You do understand, don't you Mr. Hatch, that as the minority party, you aren't actually entitled to anything? You remember how things were before 2008, when Republican leadership wouldn't even let Democrats hold hearings? (link) Remember when Sensenbrenner cut off the mics because he didn't like what Democrats were saying? (link)
You've gotten way more consideration than you deserve, but I guess that because you are no longer running the entire show, you feel like you're being steamrolled? Or something? Maybe you're not a big fat liar, maybe you're just a big fat baby.

http://www.youtube.com/watch?v=rOeEXnPA898
Posted by Professor Chaos at 5:07 PM No comments: Links to this post

Things I miss about San Francisco

Or SBC Park or AT&T Park or whatever the hell they're calling it these days.

I grew up watching the Giants play at Candlestick Park.

At first glance, Candlestick appears to be a typical cookie-cutter, multi-use, 1970's style stadium. Which would have been fine. But the 'Stick was anything but typical once the sun went down.

As soon as the sun began to set, the fog would roll in, the wind would swirl around the field, and your parka, blanket, and cocoa were just never going to be adequate. 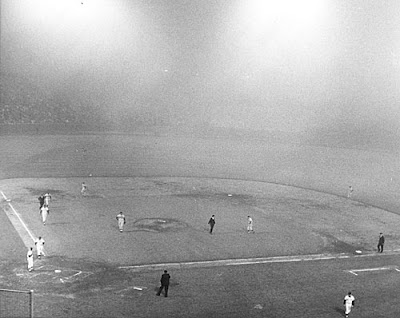 I've been skiing in snow-covered mountains, I've been to Seattle in the winter, I've taken inventory in a walk-in ice-cream freezer, and I swear there is just no kind of cold like Candlestick Cold. It get into your bones. And it slowly deflates your very soul. There used to be an award they gave out to anyone who stayed to the end of an extra-inning night game. I believe the Latin translates as: I came, I saw, I survived.

Of course the 'Stick does have this guy: And where else could this happen? 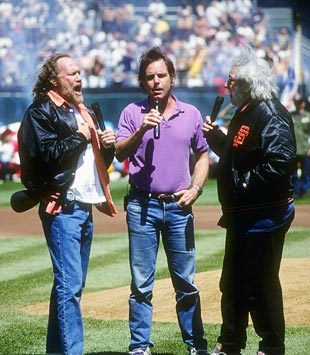 The Grateful Dead set the tone for a special Giants season, singing the anthem on Opening Day at Candlestick Park.

But nothing could ever make up for that cold. When Mark Twain said that the coldest winter he ever spent was summer in San Francisco, he must have been referring to Candlestick.

So when the Giants built their new downtown stadium, I wasn't asking for much. It could have been Ernest Borgnine ugly as long as I could go to a game without stopping off at REI first.
But when I saw the park

I thought I was going to cry. Pac Bell/SBC/AT&T Park is the most beautiful baseball facility in the US of A. And screw you, Baltimore - I've been to Camden Yards and it's nice, but not even close. Same to you, SanDiego & Petfood Park.

And yes, the giant coke bottle in center field is a little cheesey (although at least it doesn't light up in different colors like the one at Turner Field) but once you've sat behind home plate and watched Barry Bonds send a ball into San Francisco Bay, there is nowhere else you'd rather watch a game.

And that's not even the best part.

See those people behind the right-field wall? Under the out-of-town scores? They're watching the game for free!
And this is the view they have: Anyone can walk behind Pac Bell Park and watch the game over the right-fielder's shoulder free of charge. If there are other people waiting, security will ask you to move along after one inning, but since the first year that hasn't been a problem too often. It's an amazing perspective on the game, being right on field level. It really gives you an appreciation for the amount of ground these outfielders have to cover.

In summary: Pac Bell /AT&T park is the greatest ballpark in the country. And I'll fight anyone who says different and is considerably smaller than me.

Posted by Professor Chaos at 1:40 PM No comments: Links to this post