The Crazy Lady is Back, and she's a Bitch! 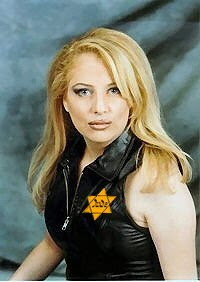 Biker Mama and Sheriff of Israel Debbie Schlussel is still writing things on the intertwebs. And she's still finding weird things to get all upset about. What's putting a bee in her bonnet today?

It’s one thing to be against the government getting involved in what you eat or how much you weigh. Big Brother shouldn’t be in our kitchens or on our dinner tables.

Yes, it's one thing to be against imaginary things that aren't happening. That's totally reasonable!

But it’s entirely another thing to be subject to the constant, intellectually dishonest promotion of fat people as “beautiful” and “sexy.” They aren’t . . . unless you’re a chubby chaser.

Because beauty is totally not in the eye of the beholder. And not subjective at all!

Also, I don't really recall any relentless promotion of overweight people as "beautiful" or "sexy" All I ever see on the covers of pop culture magazines is crap like this: 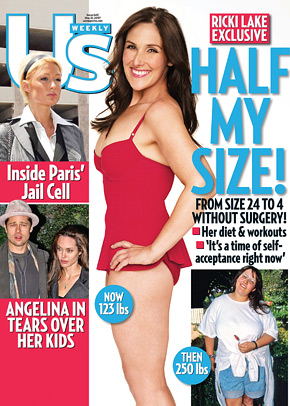 so I'm not really sure where this is coming from.

Meow! How insecure about your own appearance do you have to be to go on a rampaging attack on an actress you've never met just because she made the beautiful list and you didn't?

This girl’s weight is sickening. She’s gross to look at. And it’s unhealthy. But People is engaging in the usual affirmative action for fat people because the editors clearly feel bad for Sidibe.

The usual affirmative action for fat people? You mean like this? She was correctly dissed by Howard Stern, who said on his satellite radio show that she would not find more acting work.

Howard Stern? Really? You're backing up your argument with a guy who makes a living saying "c'mon, show me your tits!" for four hours a day on the radio? Really?

Oh, and yes, Stern was clearly correct when he said that she would never get more acting work. Except. . . .

WS What’s next for you?
GS I’ve done a pilot for a Showtime series called The Big C and a Sundance lab film
called Yelling to the Sky.

But other than that, yeah. Totally no acting work.

This choice by People is in response to his and others’ on-target comments. It’s the whole reason this mediocre actress was nominated for an Academy Award this year. But Stern was incorrect, only because the hypocritical, usual Hollywood types felt bad for this fat chick the way they’d never feel bad for a wounded American soldier in Iraq or a victim of Islamic terrorism.

Now that's insane! I don't even know where to begin. Your "I hate fatties" rant against People Magazine suddenly veers off into wounded soldiers and bombing victims? Where does that even come from?

And part of it is because she’s not just any fat actress, she’s a Black fat actress in a ghetto movie promoted by Oprah and based on a “gangsta lit” book. Let’s face it: there have been plenty of equally ugly White fat actresses, like Camryn Manheim. And People didn’t lie to us and tell us they were the “World’s Most Beautiful People.”

God, us white people have it tough. And by the way, Camryn Manheim is not ugly. Granted, she's not some Miss America, or whatever, but she is certainly not ugly. I hope you run into her someday and that she's read your little snide bullshit about her. She will kick your ass.

Regardless of race, I’m beyond tired of the conventional Hollywood types telling us that being this fat–the girl is morbidly obese–is “beautiful.” If they really believed this, they’d cast Sidibe as a romantic lead in movies like “Somewhere in Time,” as superheroes’ girlfriends in movies like “Iron Man” and “Superman.” But that never happens.

Never happens because they're too busy promoting heavy women as beautiful too cast them in pretty-girl roles? Wait, what?

So, anyway her column goes on and on with this junior-high mean-girl attitude, tossing out words like "humungazoids" (I kid you not) then wraps up with this gem:

For those who say I’m shallow because I’m attacking her for her looks, that’s not the case here. On the contrary, I’m faulting People for doing the exact opposite: lying about her looks and promoting them as “World’s Most Beautiful.” It’s dishonest.

I'm not shallow because People magazine does the opposite of what I'm doing. Ooh, what formidable debate skills!

And in the spirit of your column, Debbie, may I just say that you are a nasty, hateful little c-word with serious self-esteem issues and a need to be bitchy to others to make yourself feel a tiny bit better about the gaping hole where your soul should be.

Your Input Will No Longer Be Needed. Thank You.

Listening to the radio on the way in to work this morning, I heard an NPR business reporter say, and I'm paraphrasing here, "Oil company representatives say that they are concerned that this spill will lead to more regulations. They believe the industry is already over-regulated."

Look, oil company assholes, when your industry is currently spewing 5,000 barrels of crude per day into the Gulf of Mexico, when your product is currently destroying the livelihoods of fishermen and shrimpers, when your business is currently threatening entire eco-systems, you don't get to put your two cents in. You don't get to be part of the discussion. No one wants to hear your opinion about anything right now, especially if your opinion is that you have too many safety rules.
Even if you had a non-retarded opinion, no one wants to hear it. Your point of view is not relevant to the rest of us. We don't care what you think. We don't want to hear anything from you except how sorry you are and what you're going to do to fix this shit. Other than that, you can just shut the fuck up. Posted by Professor Chaos at 7:34 PM No comments: