The Birds Are Dying Because of um. . . The Gay?

I can't say for sure if this lady is serious, but it sure seems like she is. I would have guessed this was some sort of performance art/stand-up comedy, except Right-Wing Watch seems to think she's for real.

If the birds are dropping dead from the gay, shouldn't they be dropping somewhere more gay-friendly than Arkansas? And if the problem is the repeal of DADT, why would it be happening in the home of the guy who gave us DADT? There is some really convoluted "reasoning" going on here.
Posted by Professor Chaos at 8:04 PM 4 comments:

Of Course They Were Cross-Hairs

How stupid do they think we are?

Obviously, these are cross-hairs. 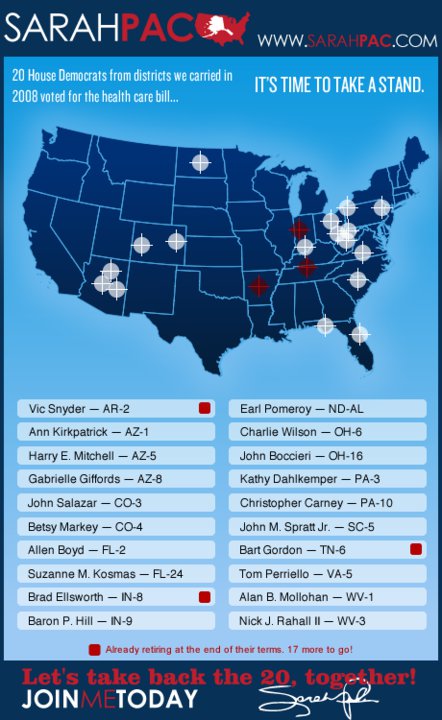 That doesn't mean that SarahPac is responsible for this Congresswoman's being shot. I have no idea whether this particular act of right-wing domestic terrorism was inspired by Sarah Palin or her gun-sight map. He may never have have seen the map, who knows? He may very well have been inspired by Palin, or he may not have. That's not the point. I mean, it is a very important point, it's just not the one I'm making.

The point I'm making is that it's utterly pathetic for Palin's defenders to take to the airwaves en masse to claim that "oh, no, these aren't cross-hairs, they're um. . . surveyor's symbols, yeah that's it, surveyor's symbols."

If those are surveyor's symbols, what are they symbols of? They don't make any sense unless they are cross-hairs.

Why can't they at least be honest and say "we meant those cross-hairs symbolically, we meant that those districts should be targeted politically." Why do they have to go through the whole pearl-clutching "why I never!" routine acting like it never occurred to them that anyone might think those were gun sights! Obviously this lady knows what gun-sights look like. And it's not like she doesn't traffic in violent gun imagery

And you know who DOES think the symbol is a "bullseye?" Sarah Palin. 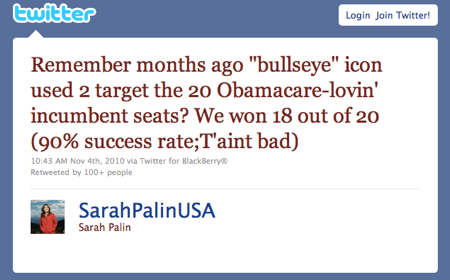 By the way, Sarah, a bullseye looks like this:

The symbol you used was a cross-hairs or gunsight. But that's not really the point either.
Posted by Professor Chaos at 8:22 AM 1 comment:

Coming from California, I've never been snowbound before. It's got my mind in a weird sorta funk. Probably why I haven't posted anything for a couple of days.
Posted by Professor Chaos at 7:01 AM 2 comments: