Things I Learned in Italy

Thing Number One:
Only Americans dip their bread into olive oil and/or balsamic vinegar. Italians do not do this. Which is crazy, because we're Americans, do you know how hard it was to talk us out of butter and into dipping it in olive oil? We only ever did it because we were told that that was the authentic Italian way to eat bread. And now we find out it's just something we made up?
Italians find this amusing. They're fine with it, once they see you're an American, they automatically bring bottles of olive oil and balsamic vinegar, they just don't get it.

Thing Number Two:
The word "Uscita" means "Exit" in Italian, and not, as I had previously assumed "Little USC." Thing Number Three:
Romans are not big on signage.
In most cities, as soon as you get off the freeway, there are signs pointing "this way to the zoo," "this way to the museum," whatever. In Rome, not so much. I think there was exactly one sign pointing the way to the Trevi Fountain and you don't see that until you're pretty much right there. Which might not be so bad if not for thing number four.

Thing Number Four:
Nearly everyone in Rome is in on this enormous practical joke involving the Trevi Fountain. When someone asks "Scuzi, Quale modo per Fontana Trevi?" they not only act like they have no idea where it is, but as if they've never ever heard of the goddamm Trevi Fountain, which is only the most famous fountain in the fucking world is all. "Trevi?" "Fontana?" They're completely perplexed. Ask them how to get anywhere else and Romans are super friendly and helpful and nearly all speak really good English and know theie way around, but the Trevi Fountain? They suddenly are just as lost as you are. We spent half the night trying to find that goddamm fountain, which might not have been so bad had it not been for thing number five.

Thing Number Five:
Every now and then the Trevi Fountain has to be completely drained of water and have maintenance performed on it.

So, instead of seeing this: 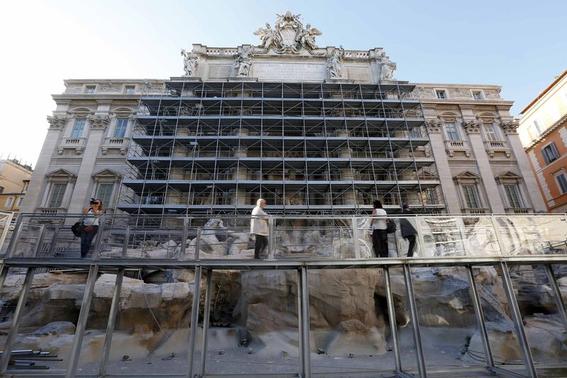 Not quite the same "Roman Holiday" experience.

Thing Number Six:
Bottled water is completely superfluous in Italy.
All over Rome, Florence, Venice and Milan, you see these: 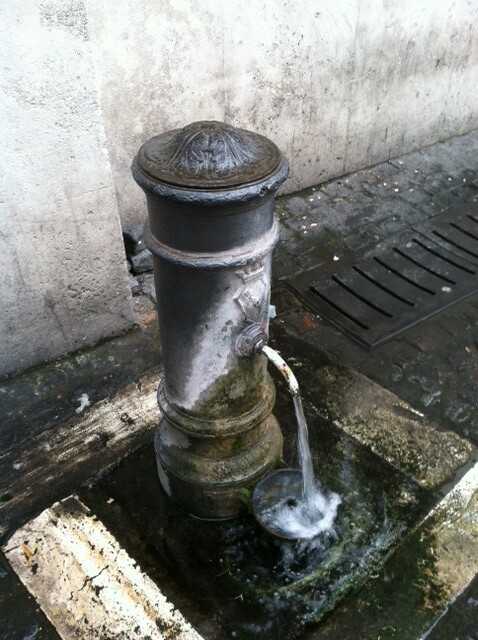 And the water which constantly flows from these is cold and clean and tastes better than any mineral water you might buy. The first one of these we stumbled upon was amongst the wreckage of Julius Caesar's Forum, and the water was still flowing and it was the best water ever, probably due to being filtered through rocks, I don't know. So we just kept refilling our bottles from these free spigots and whenever we took a drink we'd say "thank you, Caesar!" Yet every restaurant sells bottled water that costs more than wine. I don't know how they get away with it!

Thing Number Seven:
Italy gets cold as fuck in the winter.
Especially Milano which is spitting distance from the Alps. No one warned us!

Thing Number Eight:
Everyone in Italy says "Ciao!" not just pretentious douchebags like here in the States. I could never bring myself to say it because I had never heard anyone sayiong it who wasn't a pretentious American douche, but it is actually a perfectly acceptable greeting/farewell in Italy.

Thing Number Nine:
It doesn't take Mussolini to make the trains run on time.
In all four cities we visited, the trains, buses, streetcars and subways run like clockwork. Even the water buses in Venice run right on time. I really envy anyone who gets to live in a city with good public transportation. God knows we don't have that in Atlanta.

Thing Number Ten:
Anyone who says that "America is the greatest country on Earth" has never traveled.

Nothing against the good ol' U.S. of A, we're a terrific place to live. If you're white. And hetero. And cis-gendered. And it helps to be male. But we could sure learn a lot from our European friends. Starting with how to cook a steak. This is "Bistecca Fiorentina" It is how they do steak in Florence. Each steak is about the size and weight of a manhole cover, charred on the outside, rare in the middle, and I don't know what the hell they do differently, but if you ever get the chance, order one. Best steak you'll ever have in your life!


Posted by Professor Chaos at 7:45 PM 4 comments: Links to this post