Bill Maher Is A Dick

I never thought Bill Maher was funny. Worse, he comes across as such a smug, self-impressed, condescending little prick that you kinda just want to smack him. I saw his old show "Politically Incorrect" a few times during its brief run on network TV, and just the fact that he named his show "Politically Incorrect" should tell you all you need to know about Bill Maher.
The phrases "politically incorrect" or "politically correct" Os "PC" or any of its variants are pretty much the sole province of the completely douchebaggish. Generally, those phrases come up in a conversation like this:

Somehow, these terms are seen by the assholes of the world as a way to excuse their assholishness. As if anyone who takes offense at their nasty comments is just being "PC" and being "PC" is like totally gay or something.

On his show "politically Incorrect" Bill would introduce the various guests one by one and when they came on stage, he would greet male guests with a handshake and a "hello" or "how ya doin" or whatever, but female guests, when they came out, Bill would kiss them like he was Richard Dawson and greet them with "hiya gorgeous!" or "how ya doin' sexy!" or the like. It was a shame, because that could have been an interesting show with someone else hosting.

So now, he's got another HBO show, which I've never seen because I don't want to pay for HBO. But I saw this clip on the intertubes:

Wow! What an asshole! Could that have been more blatantly racist? That's how a "real black president" would behave? Like a stereotype street thug? That's what acting black means to you?

Bill Maher, you are a dick. And you're not funny. You never were funny. Even when I agree with you, which happens fairly often, I wish I didn't because I hate to be in agreement with someone who is such a complete ass. 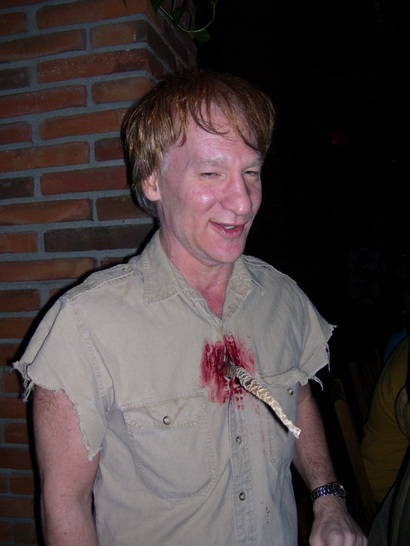 Posted by Professor Chaos at 8:51 PM 7 comments: Links to this post