Spirit says that beginning Nov. 6 it will charge $100 for fliers who pay for a carry-on bag at the boarding gate. That's a big jump from the $45 the airline is charging now at airport gates and means it could cost $200 round-trip to carry a bag on board. Most airlines don't charge to carry on a bag


To carry on a bag. $100 for you to carry your bag onto the airplane. This would be a bag that their baggage handlers don't have to touch, that doesn't have to ride the conveyor belts to the merry-go-round of luggage, a carry-on bag. And they're going to charge $100 for the privilege.

I've never flown Spirit Air, but the missus used to travel a lot for work, so she's familiar with pretty much all of the airlines, let me just ask her real quick

"United stranded me in Denver once, and they're the ones who stranded Brent in the Philipines, so probably. . . Oh no, wait! Spirit!"

Swear to God, that was verbatim the conversation we just had. I have had it with these airlines. They screw you at every turn. They started in with all these extra bag fees when jet fuel prices were so super high, and we all said "I bet when fuel prices come down they still keep fucking us with the same fees," but we were wrong. The fees are getting worse.

This is one of many reasons we need to catch up with the rest of the civilized world and get more and better rail travel. Especially on highly-travelled corridors like San Francisco - Los Angeles - Sacramento or New York - Boston - DC.  We need a better option. Right now, the choice we have is which airlines would we like to be fucked by. That's a hell of a choice.

If you need to get from one place to another, see if there's a viable non-air option. Is it drivable? Could you take AmTrak? Do what you can to keep these bastards from screwing you any more than they already do. 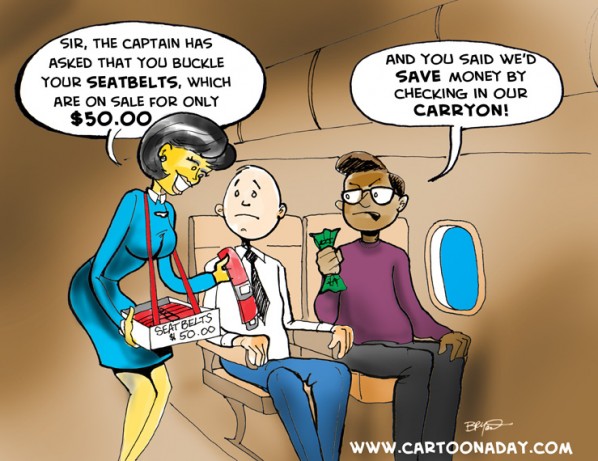 And yes, United Airlines once stranded my brother in Manilla. He arrived at the airport, ticket in hand to discover that United had decided to stop flying in and out of the Philipines. Even though they had already sold tickets for these flights, they just weren't going to go there anymore. So tough luck. He called my father who managed to get him on a Singapore Air flight into Tokyo where he could get a flight home, but apparently, United Airlines is perfectly okay with leaving a paying customer stranded in a foreign country with no warning and no recourse. Despicable. But according to the missus, who is the expert, Spirit Air is even shittier than United.

Posted by Professor Chaos at 10:28 PM No comments: Links to this post