It's good to be back!
Oh, who am I kidding? I would've given my left arm to stay on that beach in Aruba. But return to the real world I must. And have. Oh, God, I hate it here! Someone come save me!

So what did I miss whilst I was gone?

Oh, no. Wait. First let me tell you, dear readers, what I learned while on vacation.

At least in Aruba it is. Good God a'mighty, I thought we'd seen the last of them back in the '90's, but apparently not! Dear readers, dear kind, gentle readers, I can not tell you the horrors I have seen lo these past several days. They were everywhere!!!!

Dear sweet lovely readers, I implore you. Spread the word. People must be made aware that whether you are young, pretty and fit or "normal," we don't need to see that much butt. It's too much! Whether your buttocks look like a statue of a Greek goddess's caboose or like a strip of cloth between two grocery bags full of golf balls, we don't want to see it. Especially if you have small children whose faces are at butt-height. No one wants to watch your children's future nightmares.
2. My fear and loathing of the Iguana may technically qualify
as a full-blown phobia.
Look out! There's one now!﻿ 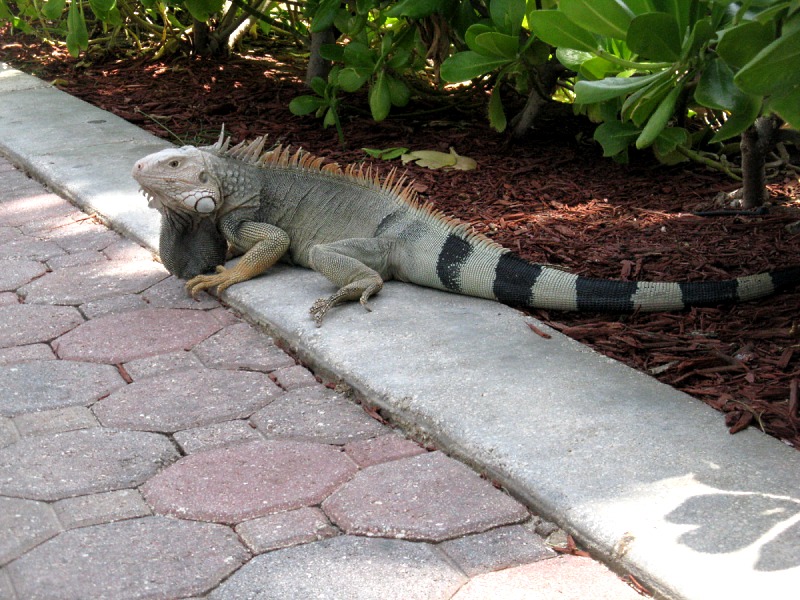 Not cool, internet. Not cool..
I know it's not rational. I'm pretty sure they're relatively harmless, and they certainly don't seem aggressive, but I will walk 20 feet out of my way to go around one. Because, come on. Look at them! they're obviously pure evil! I mean, Jeezus, their tales look like fucking king snakes! And what kind of non-evil creature has that sort of thing dangling from it's chin?

Don't kid yourself, he'd peck your face off as soon as look at ya!
I think that in the hierarchy of evil animals, obviously the alligator is Satan. And that makes Iguanas his demon minions.

Canine Hitler? Probably.
﻿
And these vile, loathsome creatures are as ubiquitous as bare buttocks at the Holiday Inn Palms Beach. Some people even feed them.  Most small children aren't even afraid of them, which makes me feel a bit like a coward, but mostly like I'm just smarter than these small children who are about to have their souls taken from them.

How may I serve you, my dark Lord?
Kill my parents? Yes, master!
3. I'm really glad we don't pay for HBO
I'm not saying they don't have some good stuff. I hear Game of Thrones is supposed to be quite compelling.  But none of the good stuff is ever on when we are in a hotel with HBO. I didn't get to see "Girls," so I'm still not sure whether I'm supposed to love or despise Lena Dunham, which makes me feel like less of an engaged citizen somehow. (Tiny Furniture was pretty good) No, we get "True Blood." Good God, what a ridiculous show. And not because it's about vampires. I have no problem suspending disbelief for a good show. I'm a big fan of The Walking Dead and Orphan Black. And I loooooved Carnivale. But the episode of True Blood we tried to sit through, which, by the way was voted a fan favorite or viewer's choice or whatever, so it's not like we just caught them on a bad night or something, this was supposedly one of the best episodes, and I totally lost control of that sentence about 20 words ago.
Anyway, it's just a bad show.  Just bad writing. You can do a show about vampires. You just can't have a "vampire terrorist" fighting for "vampire rights" by killing a reporter on TV. And you can't have a character find out that she has faerie anscestry and that puts her in danger because faerie blood is the most delicious type of blood to a vampire. It's just too stupid!

And you don't deserve Christopher Meloni!
﻿
﻿
Also, HBO has Bill Maher who, as previously noted, is a prick. A smug, self-impressed little prick. I happened to see a minute of him doing a one-on-one interview with someone I didn't recognize when the subject of Jay-Z came up. Maher said he likes Jay-Z because "him and his girl" don't get into any trouble or something like that. Oh, I'm sorry, Bill Maher, when you say "his 'girl'" are you referring to worldwide superstar Beyonce'? Is that who you you're referring to, you misogynistic little asshole? Beyonce'?  The international super-platinum phenomenon? That's the "girl" whose name you can't bother to remember? God, I can't stand Bill Maher! (And a special welcome to those of you who found this page by using the search term "Bill Maher Is A Dick")
So what did I miss? I think I'm going to wait another day to find out. I'm pretty sure I'm going to be happier not knowing.
﻿
﻿
Posted by Professor Chaos at 5:43 PM 6 comments: