Some Things Are Just So Predictable

A case for term limits in Congress

Whenever I see a column by someone with whom I am not familiar, the first thing I do is check the author info at the bottom of the column to see if it's anyone with an obvious axe to grind. So who is Lee Raudonis?

Lee Raudonis of Big Canoe is a former executive director of the Republican Party of Georgia.
(Big Canoe is the name of a town in GA)

Ah, now it makes sense. Republicans only care about term limits when they are in the minority.
From the Gingrich "revolution" until 2008, you never heard them talking about term limits. Hell, term limits was even part of the Contract on America, but as soon as they took power, eh? Term limits? mmmm, no thank you.

Remember the “Contract with America,” a document that some believe helped Republicans gain control of both houses of Congress in 1994 for the first time in 40 years? I remember it well, because I was working in the House of Representatives at the time and suddenly found the member for whom I worked in the majority party. I also remember the “Contract,” because one of its key provisions was support for congressional term limits.
At the time, I thought this provision was more of a political gimmick than a serious proposal to reform government, and I was not all that disappointed that the House could never muster the 290 votes needed for a constitutional amendment to put term limits in place.

Oh, they tried so hard to muster those votes! So much effort. . . oh, wait! I'm thinking of all the effort they put into trying to destroy Bill Clinton! Watergate, Filegate, Troopergate, Travelgate, and when they couldn't find anything, they impeached him for getting blown. I guess that's what distracted them from their efforts to install term limits.

In the 15 years since I left Washington, I have become a supporter of term limits

Qu'une surprise !
I bet it was for the reason usually given.

I have become a supporter of term limits — but not for the reason usually given.

Rather than favoring term limits as a way to prevent representatives from becoming corrupted by power and out of touch with their constituents, we need to limit congressional service in order to break the unhealthy bond that exists among many representatives, their political party and their constituents. Too many members of Congress have become so dependent on their constituents and party for their identity that they seem incapable of making any decisions that might upset the voters, even if the future of the country depends on those decisions.

Yes, clearly that is the problem. Congressmen are just too responsive to their constituents. It's so obvious now! Also, they are just so dependant on their party, that's why Barack Obama had such an easy time getting healthcare to sail through the legislature! Members of Congress were just so closely tied to their reform-favoring constituents and their reform-proposing party that they just never thought to oppose. . . wait a minute! That's not how it happened.

By way of example, few politicians in either party appear capable of making the difficult decisions needed to bring the budget deficit under control.

And that brings us to the second thing that is just so predictable. Once out of power, Republicans quickly rediscover their fear and hatred of deficits.

I seem to remember someone saying. . .

just a few years ago, when Bush 43 was running up deficits that would have made the Gipper blush. No one on the right was complaining about fiscal irresponsibility then, just as they weren't griping about deficits in the '80's. But as soon as they are in no position to do anything about it, MY GOD!!!! THE DEFICIT!!!!!!

It's just so predictable!

The third thing that is just so predictable: The "Vote Out All The Incumbents" movement that surfaces when the majority of the Incumbents are Democrats.

The objective of Vote Out Incumbents Democracy is to force Congress to act more responsibly as representatives of the American people, present and future, as well as in their role as caretakers of our nation. 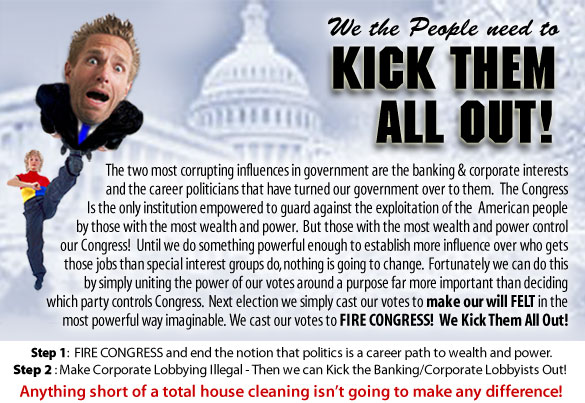 See, it's got nothing to do with which party is in charge! Of course not! The fact that there are currently 257 Democrats out of 435 seats isn't the point. And the fact that if every incumbent is voted out there would be 257 Republicans instead, well gosh! That never even occurred to me! And even if all the incumbents aren't voted out, each one that is is voted out has about a 60% chance of being a Democrat, so that an anti-incumbency-themed election could only help Republicans, well, Gee! I never even thought of that! It's just that we didn't happen to be in an anti-incumbent mood from 1994 through 2008. Party has nothing to do with it!

It's all just so predictable!


P.S. I don't know why this strikes me as so funny, but when I did a Yahoo image search for Newt Gingrich, Yahoo advised me of this:

Others who searched for Newt gingrich also searched for...Not a political figure in the bunch! Apparently people who like Newt also like drunk girls, over-the-hill rock stars, an actress I never heard of, and some girl's butt in a thong.

Yeah, that sounds about right!
Posted by Professor Chaos at 4:20 PM 3 comments: Links to this post