How Bad Does the "Pledge to America" Suck?

So the long-awaited "pledge to America" was finally released, and surprisingly, it's a sad, flaccid little joke!

You want to know how lame this "pledge" is?

Erick "assclown" Erickson is ripping on it. And he's right! Erickson is right! That's never happened before. Do you know how disconcerting it is to read Erickson critiquing something and think "hey, he's got a point?"


I don't know what his beef is with George McClellan. According to CivilWarHome.com, he was considered "A brilliant engineer and highly capable organizer." But I guess when you're Erick Erickson, you have to lead off with something moronic and jerky so people know for sure that it's you writing.

But anyway, here's the opening of the Wedgie to America:

America is more than a country.

America is also a crappy band from the early Seventies!

America is an idea – an idea that free people can govern themselves, that government’s powers are derived from the consent of the governed, that each of us is endowed by their Creator with the unalienable rights to life, liberty, and the pursuit of happiness.


That free people can crib shamelessly from Thomas Jefferson!

America is the belief that any man or woman can – given economic, political, and religious liberty – advance themselves, their families,
and the common good.<--Communism! Whenever the agenda of government becomes destructive of these ends, it is the right of the people to institute a new governing agenda and set a different course.

Yeah, I think everyone already knew about that. We call them "elections" and in those "elections" we vote for the folks whose agenda we would like to see enacted. And then you assholes filibuster, stonewall and otherwise impede that agenda.

An unchecked executive, a compliant legislature, and an overreaching judiciary have combined to thwart the will of the people and overturn their votes and their values, striking down longstanding laws and institutions and scorning the deepest beliefs of the American people.

An arrogant and out-of-touch government of self-appointed elites makes decisions, issues mandates, and enacts laws without accepting or requesting the input of the many.

If by "self-appointed," you mean "duly elected," then yeah, I see your point. Obviously every action a presidential administration takes should be decided by a plebiscite, you know, the way the Bushies did!

Like free peoples of the past, our citizens refuse to accommodate a government that believes it can replace the will of the people with its own. The American people are speaking out, demanding that we realign our country’s compass with its founding principles and apply those principles to solve our common problems for the common good.

Well, you know, THESE American people: 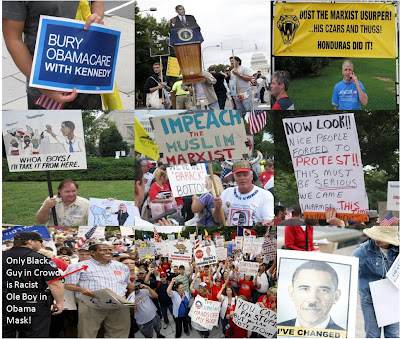 These people are obviously concerned with "the common good" 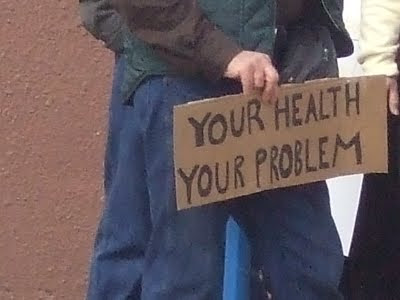 With this document, we pledge to dedicate ourselves to the task of reconnecting our highest aspirations to the permanent truths of our founding by keeping faith with the values our nation was founded on, the principles we stand for, and the priorities of our people. This is our Pledge to America.

None of that means anything.
Even Erick Erickson can see that:

Yes, yes, it is full of mom tested, kid approved pablum that will make certain hearts on the right sing in solidarity. But like a diet full of sugar, it will actually do nothing but keep making Washington fatter before we crash from the sugar high.
(Red State)

It's really surreal, looking at something Erick Erickson wrote and thinking "hey, that's true. I can't argue with that."

We pledge to honor families, traditional marriage, life, and the private and faith-based organizations that form the core of our American values.

we pledge to promote greater liberty, and also give the government the power to decide who may marry whom, and restrict reproductive choice.

We pledge to uphold the purpose and promise of a better America, knowing that to whom much is given, much is expected and that the blessings of our liberty buoy the hopes of mankind.

That also means nothing. This is an agenda? It's like saying here is my plan. Step one: Be awesome! Step two: Do really cool stuff. Step Three: Be an inspiration to others.
Wow, I think I've actually met all those goals!

Supposedly, this thing goes on for 21 pages. http://pledge.gop.gov/ only shows the one page.
So I may have to take Erickson's word for it when he says:


The pledge begins by lamenting “an arrogant and out-of-touch government of self-appointed elites” issuing “mandates”, then proceeds to demand health care mandates on insurance companies that will drive up the costs of health care for ordinary Americans.

The plan wants to put “government on the path to a balanced budget” without doing anything substantive. There is a promise to “immediately reduce spending” by cutting off stimulus funds. Wow. Exciting.

There is a plan to cut Congress’s budget, which is pretty much what was promised in 1994. Seriously? In 4 years did the Democrats really blow up the Congressional budget? No — the GOP did that too.

Hey, GOP. Do you have any idea how shitty your plan has to be for Erick "ass-hat" Erickson to rip on it? He's the guy who tweeted this about a dumb TV ad: Tebow's mom didn't abort. That's enough for Erickson to conclude that all pro-choice groups have no credibility. This is the guy you couldn't excite with your little "Dredge America" agenda. Do you have any idea how hard it is to NOT impress this little nozzle of a man? In a way, it's almost impressive!


Posted by Professor Chaos at 8:09 PM 2 comments: Links to this post