Idiot has too much time on his hands


So this showed up on my Twitter feed the other day:


No, Wonder Woman is not queer. You’re just a post-modern moron


And you know, if you want people to read your column, start out with a juvenile insult. Oh, no wait. It's a joke. Start with a joke. Anyway. . .


The cost of being a superhero has been reflected upon in many of the recent DC and Marvel movie franchises. The mighty responsibility of being able to avoid bad things happening to good people, but minus the transcendence of knowing whether you always should and what the collateral damage will be if you do.

"Being able to avoid bad things happening to good people?" That's a superpower now? Look! Up in the sky! It's Captain Avoidance!

Turns out no matter how cool these movies are visually, their true depth relies on something that isn’t remotely futuristic or cutting edge. These are profoundly human stories. These are stories filled with soul.

Soul? These are silly, escapist fantasies aimed at 12-year-olds for the sole purpose of making money. You may be reading a bit much into them if you think they are "stories filled with soul."


The butler Alfred tells Bruce Wayne that the duty of Batman is to “endure” what others cannot. That’s a Christ-like sacrifice.

Well, the butler was wrong. There's nothing Christ-like about Batman. He kicks the bad guys' asses. He doesn't let them kill him.


Kal-El/Clark Kent is a Mosaic exile from a doomed culture sent upstream to inspire humanity with his messianic altruism.

I'm no superhero expert, but wasn't Clark sent to Earth to save his own life because his home planet was about to blow up? Maybe he did end up inspiring humanity, but he was sent here by his father to have a chance to survive the coming apocalypse on Krypton.


All of these characters must bear their cross and suffer a Christ-like descent into hell to perform their service to humanity. That’s why their characters, even with their flaws, are cornerstones of the pop culture zeitgeist. They mirror both our Adamic frailty/sinfulness as well as the imago dei each of us possesses, which inspires us to be something more than a fallen son of Adam and a daughter of Eve.

But mostly, they're just super-neato!

Unfortunately, that may be about to change. Because, you see, progressives can’t help themselves, especially once infested with the contagion known as post-modernism. Like a swarm of locusts, they cannot stop tearing down everything that is right and just until the entire harvest of good crops has been devoured, leaving only a barren wasteland of nihilism behind. Now this seems pretty hard to dispute. If Wonder Woman comes from a placed where only women exist (which I did not know, but apparently she does) it stands to reason that she would have had same-sex relations. I don't know how you could argue that.

So, how much question-begging do you have time for? Because that is rubbish.
Only a hell-hole mistaken for a paradise— whose real-life source material insists that men in dresses pee in women’s bathrooms — could arrive at such a conclusion. That’s just another way of saying that this author’s definition of paradise may be partaking in one of the classic blunders: paving the road to hell with fake good intentions.

First of all, what the hell does question-begging have to do with it? In what way did Greg Rucka use the conclusion of his argument as one of the premises?

Also, how could a hell-hole arrive at a conclusion? Because if you had ever taken a high school English class, you'd be able to see that that is what your third sentence is claiming. "Only a hell-hole. . .could arrive at such a conclusion."

And trans women using women's restrooms is the source material for what? For the hell-hole?

And I'm not sure that a definition of Paradise, not being a sentient entity with any sort of agency,  is capable of partaking in anything, let alone a "classic blunder" that sounds more like intentional dissembling than a blunder of any kind and NONE OF THIS MAKES ANY SENSE!

First, the upcoming Wonder Woman movie makes clear that far from being without male influence, her very life and culture is owed to the male god Zeus. Might that not be the plumb line we should operate from in deciphering not only sexual relations but all morality within this universe? I don’t seem to recall any discussion in the Greek pantheon where Zeus must first check in with Bruce Jenner before making a ruling on matters of state from Mount Olympus.


Okay. . . in the Judeo-Christian worldview, all men owe their existence to Jaweh (aka God the Father) so by your logic, all Christian men must be attracted to other men, since being created by Zeus requires Wonder Woman to be hetero and also WONDER WOMAN IS A FICTIONAL CHARACTER AND WHOEVER WRITES THE COMIC BOOKS CAN HAVE HER LOVE FICTIONAL DICK OR FICTIONAL PUSSY AND WHO GIVES A SHIT?

Also, what the Hell does Bruce Jenner have to do with anything?

Is it Diana’s true identity to be freaky as she wants to be or not? Don’t shackle those poor Amazonians with all your self-important man-splaining. If an American kindergartener and his parents can insist, for any reason they want, that the boy is a girl, and the rest of us simply have to deal with it, then those Amazonians don’t have to fit into your obtuse categories, either. Just add another letter onto the end of the LGBTXYZ train and be done with it, you troglodyte


Freaky? What's freaky? A same-sex relationship? Pretty sure same-sex couples don't get any freakier than us heteros. 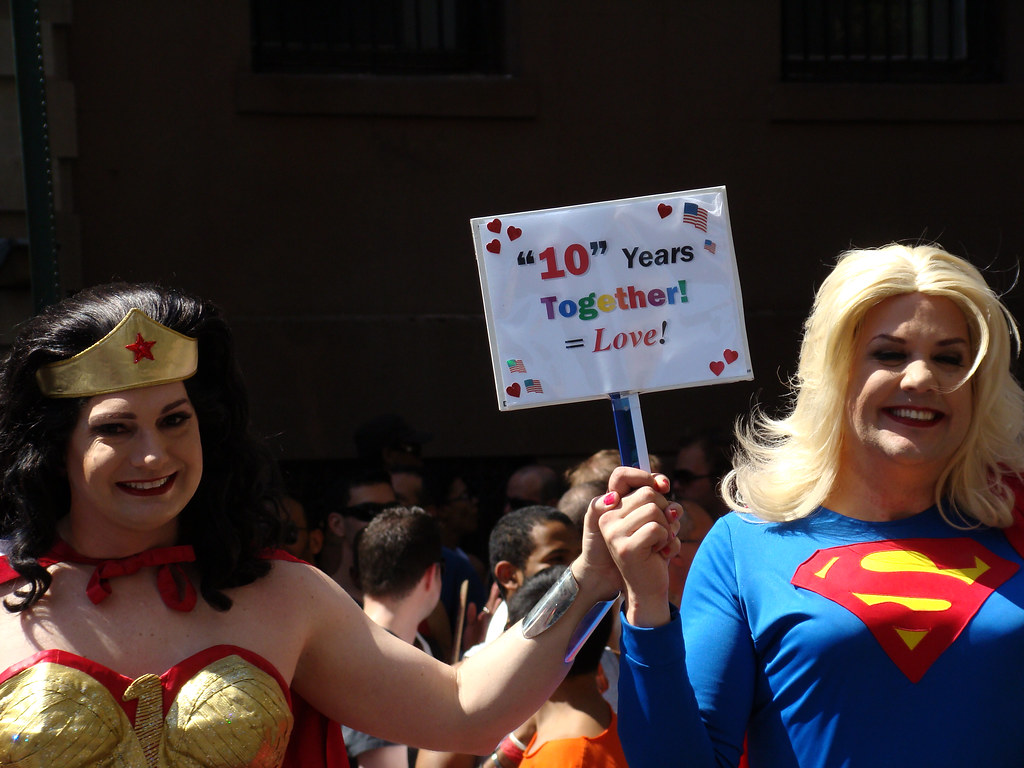 
Also, "If an American kindergartener and his parents can insist, for any reason they want, that the boy is a girl, and the rest of us simply have to deal with it?"

Do you think that's what happens in the real world?
That just for no reason at all, just on a lark, some little boy and his parents will decide to pretend to be a girl? That they will just for no reason decide that they want to suffer the slings and arrows of outrageous bigotry and hatred just for a laugh? Is that how you think this sort of thing works?
Also, the rest of us don't "simply have to deal with it," because it doesn't affect us. At all. If a small child is transgendered, it affects that small child. It's no one else's concern. Well, except for Pat McCrory.

Third, Rucka says Wonder Woman’s relationship with this world’s war hero, Steve Trevor, couldn’t possibly be uniquely characteristic of her sexuality. Why? Because if she was “only interested in men, then fans could interpret her departure from (her home world) as an attempt to pursue (that relationship).” That interpretation, he says, would undermine “both the sacrifice she makes leaving her home and her heroism.”
So if she’s straight, she’s a hypocrite. But if she’s gay, she’s Joan of Arc? Totally get it now. Wait, no I don’t. I thought love is love. Why won’t you jerks just let poor Diana be happy in her multi-world bi-curiousness? How is her not-totally gay, maybe-someday fictional marriage affecting you anyway?

Um, you're the one writing a big old screed about this fictional character's fictional love life.
And I know you're trying to be sarcastic here, but you actually seem to have inadvertently gotten this right. You're right that love is love. And if she comes from the land of the Amazons and is now dating a man, she may well be bisexual.  And you're right that her fictional relationships don't affect you anyway, so why don't you just shut the fuck up about it already? 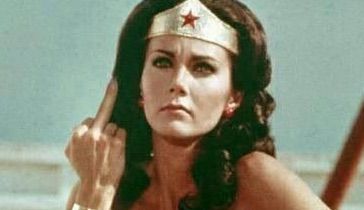 And lastly, why cast the drop-dead gorgeous Gal Gadot as Wonder Woman if the essence of being Amazonian is more connected to homosexuality than classical notions of femininity? Why not go full Ghostbusters? Cast Melissa McCarthy, put her in a baggy t-shirt and some sweatpants instead of a form-fitting suit of armor, and have her protest us to death? -

Okay, first of all, fuck you.
Second, Gal Gadot is a real person? Because damn if that doesn't sound exactly like a comic book character name!

Third, you know Melissa McCarthy isn't the lesbian in the Ghostbusters cast, right?

Kate McKinnon, who, besides being possibly the funniest person on planet Earth, is also pretty much the dictionary definition of "drop-dead gorgeous." 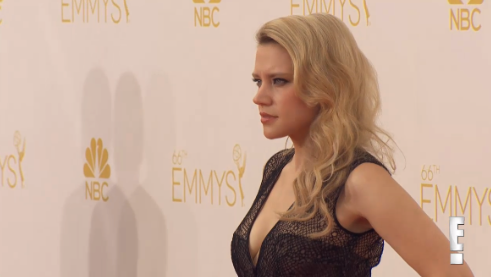 Does Kate McKinnon not fit into your "classical notions of femininity?" 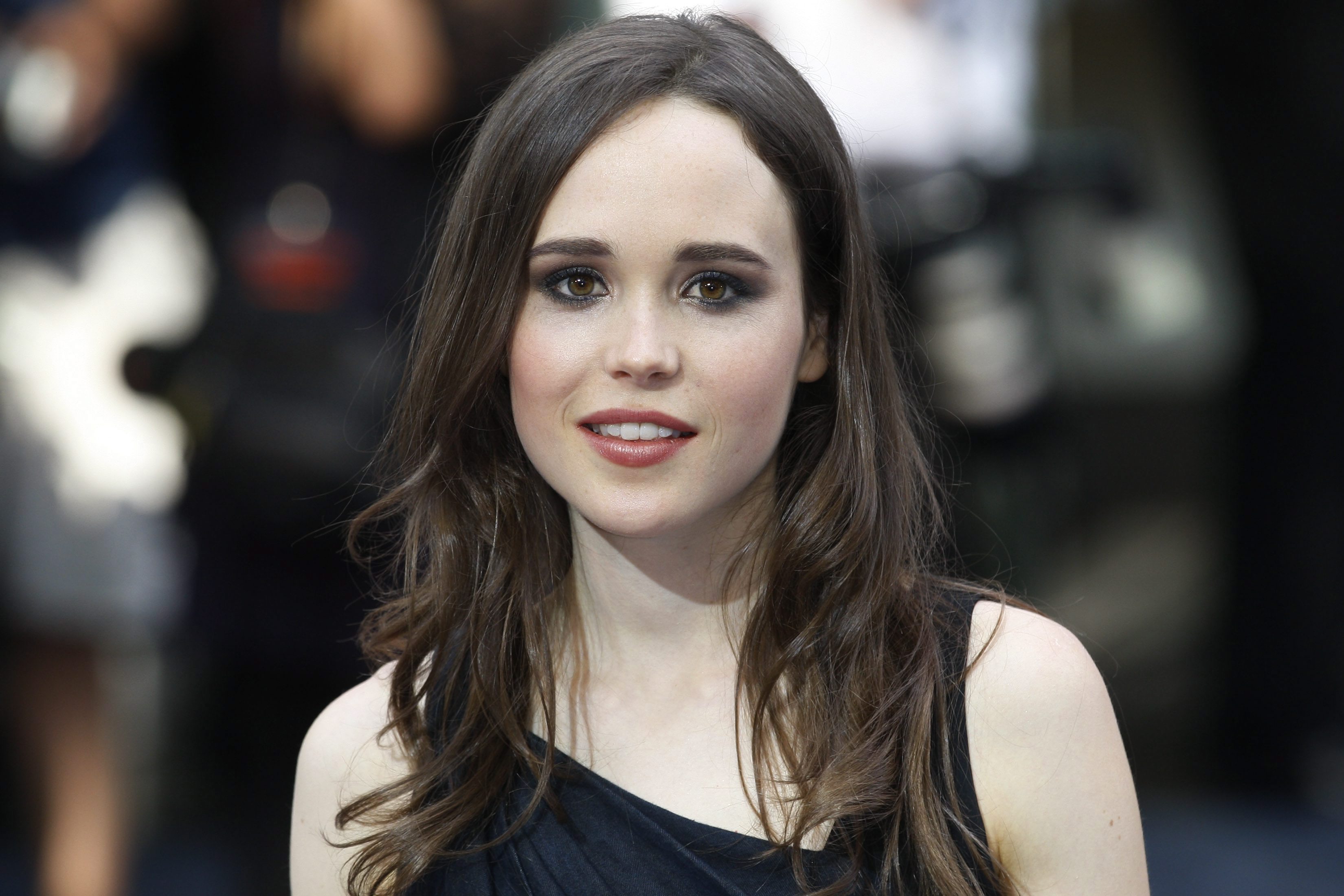 It may surprise you to learn that out here in the real world, LGBT people don't always conform to your tired stereotypes. Some do, and that's fine, more power to the fashion-conscious gay men and Birckenstock-wearing lesbians out there. But I can't imagine what a cloisterd life you must have lived up to this point if you think that a woman who loves women must necessarily be heavy-set and wearing sweat pants and whatever else you picture in your sad stupid little mind when you picture gay people.

I also can't imagine what in your life could have led you to the point where you're upset about the love life of a fictional, made-up, non-existent character in a comic book. Posted by Professor Chaos at 8:52 PM 3 comments: Links to this post