Defending the indefensible: Palin vs. Whoopi

Here's Palin being stupid and spouting gibberish in defense of the teabaggers on stupid Sean Hannity's stupid show of stupidness:

And yeah, she uses the word "refudiate," which is of course, not an actual word, but that's not even the stupidest part. Claiming that teabaggers don't tolerate racism is like sying that my car doesn't tolerate gasoline. Of course, nobody's saying that ALL the teabaggers are racist,I'm sure some of them are just baboon-ass insane in non-racist ways. Some of them just can't distinguish between small steps toward healthcare reform and Nazi Germany, but when you see people with signs like this: 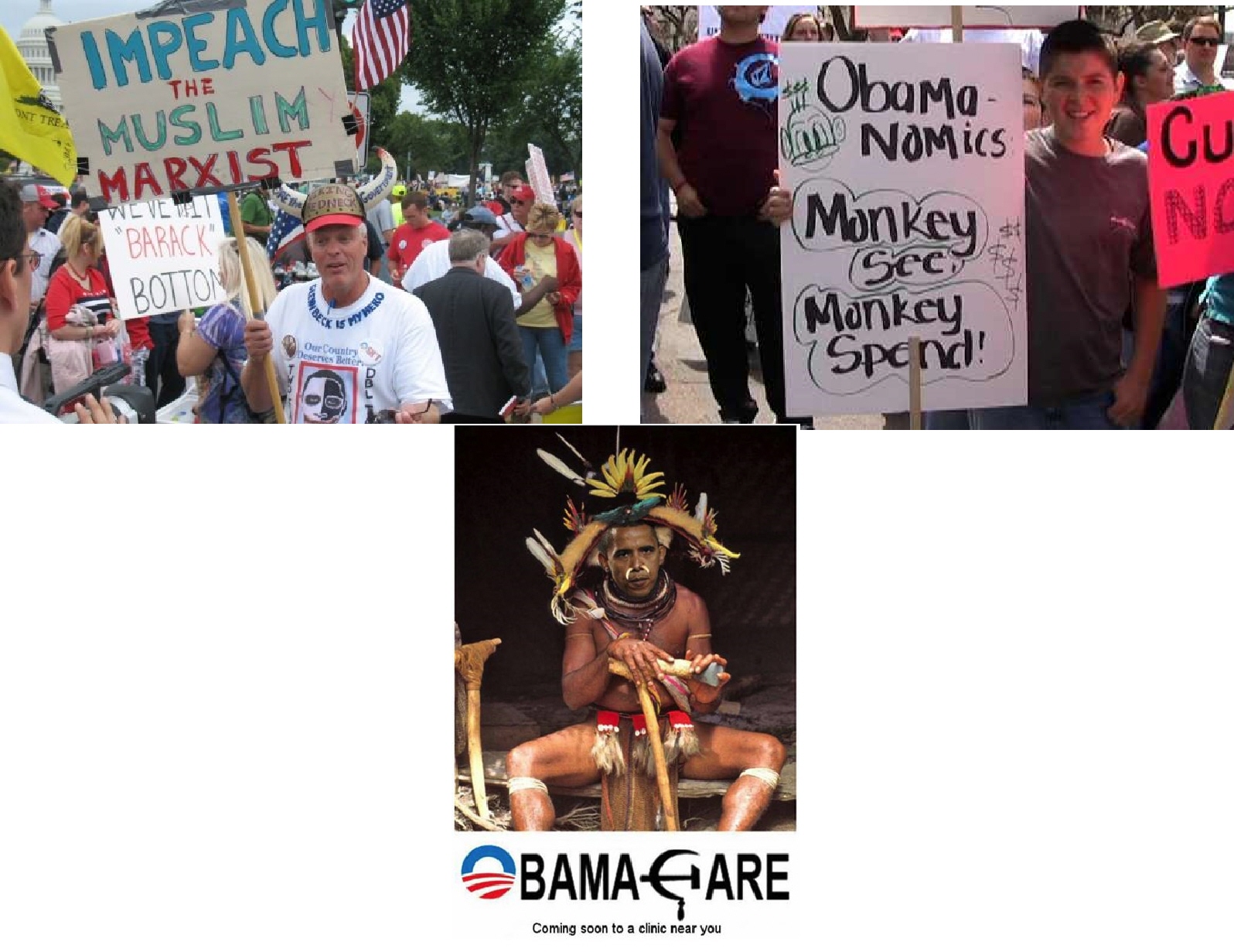 And no one is objecting, well, that's pretty much the dictionary definition of "tolerating racism."

Oh, and here's a lovely "tweet" from the Springboro Tea Party leader:

Nope, nothing racist there!

And what is this "beautiful movement, full of diverse people, diverse backgrounds" she talks about? The teabaggers are about the least diverse group I've ever seen, and what the fuck is so "beautiful" about a bunch of angry fat people screaming about Nazis and Communists and Tyranny? What beauty do you see in that? What beautiful threats of gun violence those are! Aah, so beautiful! And just look at the diversity! And this is just gibberish: "So to be called a racist, yes, those over there on the left who are opposing that good message of Tea Party Americans are using this racism accusation in order to keep people away from not only the movement, but keeping them — keeping a wall built between what the message actually is and the American public that is today receiving that message very well."
And Tea Party Americans is not an ethnic group. It's like calling me a baseball American, or a blogger American. It's just stupid. Almost as stupid as sticking up for Mel Gibson.

But no one could possibly be sticking up for crazy Mel right about now, right?

Seriously? Mel's not a racist because he's nice to your face? You've never met someone who's insincerely pleasant? I smile and converse pleasantly with people I can't stand every day. It's called having a job. Just because I listen to "Bob" prattle on about his impressions of next year's NBA teams without screaming at him to shut the hell up and try doing some goddamned work for a change you lazy piece of crap, doesn't mean that I actually like that loser. And Mel's an actor. He can fake nice better than most.
And you know about drunks, right? You know that they say stupid shit when they're drunk, right? But do you really think that Mel has no problem with Jewish folks, it's just the alcohol talking. He doesn't really know what they're saying? Don't be ridiculous! What alcohol does is lower your inhibitions so that you say out loud what you normally have enough sense to only think. If Mel's sober, he says "Oh, I'm sorry, Officer, was I speeding?" but he's still thinking "Bloody Jew! You people are responsible for all the wars in the world." He's still an anti-Semite, he just has enough sense to keep it under his white hood--I mean under his hat!
And then after all that about how drunks say things they don't mean, you say "I don't think he was drunk." So, according to your theory, he really meant the "pack of N---ers" comment. So how is he not a racist?
Claiming that Mel Gibson is not a racist is like claiming that Roman Polanski didn't rape a 13-year-old girl.

Posted by Professor Chaos at 5:06 PM No comments: