This is only going to get worse.

These people are scum.


Ever since Confederate flags finally started coming down, a segment of the white population has somehow decided that something valuable is being taken away from them and they're going to fight back.
So far, it hasn't been violent, not that I know of anyway, but last week, this also happened, and also in Georgia (sigh).

Armed white Confederate flag supporters clashed with attendees of a black child's birthday party in Douglasville, Georgia, over the weekend, culminating in a tense standoff between the two groups and a threat from the Confederate battle flag-bearing band that they would "kill y'all n****rs."

"One had a gun, saying he was gonna kill the [racial slur]. Then one of them said gimme the gun, I'll shoot them [racial slur]," party organizer Melissa Alford told the Atlanta Journal-Constitution, adding the trucks had passed by several times before stopping in a field next to her house.


Oh, but don't worry. They aren't hateful. Like at all.

A group of white men said they were the ones victimized after being accused of disrupting a black child’s birthday party in Georgia while flying Confederate flags from their pickup trucks, according to the Atlanta Journal Constitution.


Because of course. Of course they're victims. Nothing happened to these guys. None of them got hurt. One guy did get arrested, but, as the police report states, that was for an un-related charge. 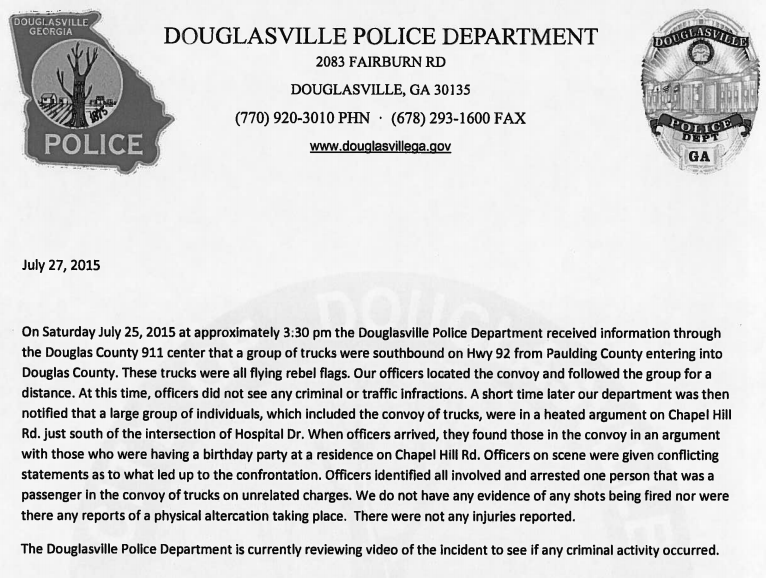 But somehow, they are still able to see themselves as "victims." They haven't had their precious flags taken away. They haven't lost the right to fly them in public. But if there is maybe a bit of societal disapproval for flying the banner of a nation that went to war with the United States in order to try to preserve the institution of slavery, they somehow feel that they're - I don't know, losing their place at the top of the societal food chain? Or something? I don't know, but they seem to feel threatened in some way.
And these cro-magnons are not going to go gently into the dustbin of history. They thrive on rage, resentment and paranoia. And they're heavily armed.
This is only going to get worse.

In Tennessee, Sgt. Briscoe, a 17-year Army veteran and African-American woman, was harassed by two white men in a pickup truck similarly adorned with Confederate flags. While driving past her family at her home, the truck slowed down and the men called them “m*therf*cking n***ers.”

Posted by Professor Chaos at 8:02 PM 5 comments: Links to this post