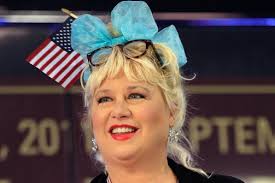 When I first found out about Victoria Jackson's political ravings, I thought for sure it was some sort of extended joke.

But the joke is still going on. So maybe she's serious?

After the election, I found out she has a Twitter. I signed up to follow her, thinking it would be funny. Which it kinda is, but mostly just sad.

White people (statistically) don't have more children than they can take care of without outside assistance. It's called RESPONSIBILITY.

I do give her credit for not prefacing this with the obligatory "I'm not a racist, but. . ." If you're going to be a racist douche, at least own it!

Better to SECEDE than have a civil war.

Um, secession and civil war are kinda like love and marriage.
You can't have one without the oooooo-therrrr!!!

Victoria Jackson ‏@vicjackshow
Repeal Obamacare. It is killing jobs in this country. Thousands have already lost their jobs because of it. I signed http://wh.gov/9L2g

Yeah, the policies which have yet to take effect are totally killing jobs! Unless you believe like, numbers and stuff.


I haven't even looked at the chart yet. I just love the idea of evil being something that can be quantified and expressed in chart form!

And of course, she's huge on secession!

Peacefully grant the State of Minnesota to withdraw from the United States of America & create its own NEW government. http://wh.gov/9pAZ

You do know Minnesota's a "blue state," right?

Why would they even want to secede, when the guy they voted for won?

Victoria Jackson ‏@vicjackshow
Peacefully grant the State of Tennessee to withdraw from the United States of America & create its own NEW government. http://wh.gov/9mxP
Expand

I really don't understand what the point of these secession petitions is supposed to be. Do they think that if they get enough signatures, the White House is going to say ""oh, sure go on ahead and secede., if that's what you really want?" Or that President Obama is going to say "oh, gee, I didn't realize you folks felt that strongly about all this. Well, sure, then Mitt Romney can be president."
Or maybe they think that once their petitions are deservedly scoffed at, they can go get Cletus and Jimbo down 't the gun club an' start overthrowin' the guvmint? And of course, being a teabagger douchenozzle, she is, shall we say, a fair-weather patriot?


And which "Red-State" does Ms Jackson call home?

Why, Florida, what an unusual shade of red you're wearing for the last few elections!

Today, she tweeted a link to an article she wrote for her asinine website:

I Have No Money by Victoria Jackson http://victoriajacksonshow.com/5472/i-have-no-money …

So I made the mistake of looking at it.


I Have No Money

Because I am terrible at being a comic and worse at being an actress.

Okay, I added that last part.

I don’t vote R to protect my money. I have no money. And, I don’t have health insurance, I can’t afford it, but I’m still against Obamacare. Why? Because it’s about the good of the whole, not about me.


So, follow that logic. She's right-wing Republican because she's putting the greater good above her personal needs? That's like being so impressed by the Dalai Lama that you convert to Catholicism.

Covering all the bases.

So she's gotta be joking, right? There's no way that could make any sense to anyone.

Libs can’t get that. They pretend they care for the poor, but their policies have made the poor poorer.


Do you want to know what the article is that she links to to show that liberal policies have hurt the poor? Here's the title:

Poorest of the poor worse since 1996 welfare reform

See, she can't be serious. No one would possibly think that this article supports her point.

The article she links to here is on something called the American Clarion, which offers this trenchant analysis of the British healthcare system:

Having lived under that system for three years, I can tell you: it blows huge, steamy chunks.


The "economical fact" link? An anonymous letter to the editor in which someone recounts the awfulness of living in the Communist dictatorship of the USSR.
Among the horrors:

There was no welfare for that family because the fathers of socialism Karl Marx and Friedrich Engels decreed, "If you do not work, you do not eat."

Which is a: pretty much the opposite of the "punish the successful, reward the lazy" steretype conservatives always have of socialism, and b: sounds sort of familiar somehow. Where have I heard that before?

For even when we were with you, we commanded you this:If anyone will not work, neither shall he eat.

Teabaggers dream of living in a country where there is no welfare for those who do not work. Sounds like the Soviet Union was right up their alley!

Countries that use a lot of energy are able to protect their “environment” more than countries that have no energy. Fact.


Fact! I see someone attended the Dwight Schrute school of rhetorical forensics!
Wanna know what the "Fact" link goes to? The Green Dragon website!

Well This is Insane

The website that makes the totally-not-silly claim that environmentalism is a tool of the Anti-Christ/UN/One World Government cabal to destroy all that is good or something. That is the source of this particular "Fact!"

Anyways, it goes on and on, and I'm just too tired to keep reading, but you get the idea. I really really can't believe that there is any way Victoria Jackson is serious about any of this. I would never have guessed that she was this good a comedian, but I can't believe that she could possibly be this crazy and stupid and still function.

Posted by Professor Chaos at 9:56 PM 5 comments: Links to this post