Well, obviously it means nothing for Washington since what he's won is the Texas GOP primary and not the general election, which he would have to also win in order to go to Washington, but please, do go on.

He's already being called the next Marco Rubio.

They said, as if that were a compliment.

Conservative Republican Ted Cruz, who scored an upset — but rock-solid — victory over Lt. Gov. David Dewhurst in yesterday's Texas U.S. Senate runoff is being hailed today as the second coming of the current Florida senator and vice presidential short-lister.


"Just like the upstart Rubio, who started with long odds but defeated long time incumbent Florida Governor Charlie Christ in the 2010 GOP Primary with major support from the Tea Party, Cruz did exactly the same thing in Texas," the Christian Broadcasting Network's David Brody wrote in an analysis of last night's results.


And who has more credibility than a reporter from a network founded by Pat Robertson? To whom else could you possibly turn for legitimate political analysis?

Um, are we pretending that Rick Perry is not a teabagger? Did he not speak in front of those teabagging rallies? Wasn't it at one of those rallies that he talked about possible secession?

“Texas is a unique place. When we came into the union in 1845, one of the issues was that we would be able to leave if we decided to do that.”
- Texas Governor Rick Perry hinting at secession at a Tea Party rally today

And how is Jim DeMint not an "establishment" figure? He's been in either the House or the Senate since 1999! How long do you have to be there before you're "established?"

Is maybe the point that htere really is no longer any distinction between the Republican "establishment" and the Birthers, Birchers, Tenthers and Thruthers who gather under the umbrella of the "Tea Party?" Oris it too much to expect for ABC to connect those dots? I guess it would interfere with their whole "Tea Party - outsider - rebel - grassroots" narrative.

So, what does one Republican's victory over a fellow GOPer in the bright red state of Texas mean in the grand scheme of things?

As Brody noted: "Eventually the media and others will realize that the Tea Party is not only far from dead it's just warming up."

Oh, I'm sorry. I thought this was a "report" from a "news" organization, not  promotional material from FreedomWorks.
Also, I'm not sure that Texas is really all that bright red anymore. It's projected to be a swing state by 2016. But why would you bother checking into that? I mean it took me literally almost an entire minute to type "Texas Swing State" into the Google and come up with these:

So, how could I expect ABC to put that much effort into its stenography reportage?

But regardless of who wins control of the Senate this November, we know that the upper body in Washington is going to be as polarized and uncompromising as ever, notes ABC News Political Director Amy Walter. Conservative Republicans like Cruz and Richard Murdouck in Indiana won because they insisted they wouldn't be part of a "go along, get along" culture.

To put it another way, as one smart Republican strategist told the Note: "The fact the Tea Party can win is the 2010 story; whether they can govern and what the 'establishment' will do to retool is the question." SARAH PALIN SEND 'CONGRATS'. ABC's Shushannah Walshe points us toward Sarah Palin's Facebook page, which includes this note: "Congratulations to Ted Cruz! This is a victory both for Ted and for the grassroots Tea Party movement. This primary race has always been about the kind of leadership we need in D.C. Our goal is not just about changing the majority in the Senate. It is about the kind of leadership we want. Ted Cruz represents the kind of strong conservative leadership we want in D.C."

Yeah, I know there should be a paragraph break in there or something, but that is an exact cut & paste from the ABC site. But that's not the point. The point is, that in an analysis of a story about electoral politics, ABC cites a reporter from the Pat Robertson Network, a "smart Republican strategist" and Sarah fucking Palin. Now that's objectivity! 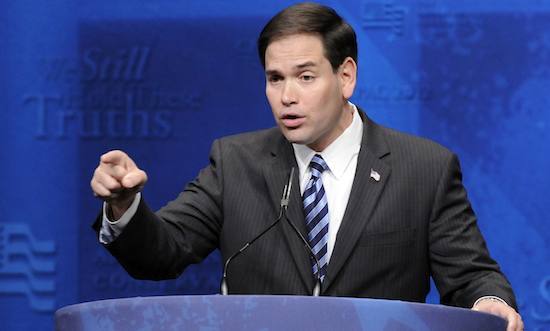 Even Rubio can't think that this stupid piece of legislation has any chance of becoming law, so why is he wasting his time on it? Is he just trying to prove his anti-tax boner fides (see what I did there?) to Grover Norquist? Is it just that he hopes Democrats will vote against it so he can claim that they hate America's athletes? Is he just a moron? I'm going to go with all of the above.
Posted by Professor Chaos at 9:26 PM No comments: