To be fair, this post should really be things I miss about California since a couple of these are from LA, but anyway. . .

Unusual Elvises, in order of unusualness:

http://www.dreadzeppelin.com/index2.html
The lead singer for the band Dread Zeppelin, Tortelvis is the self-described "Rock N Roll Singer Inna Reggae Style." The band started out doing reggae versions of Led Zeppelin songs (hence the name) then mixed in Elvis, Disco, and whatever else they thought needed to be taken down a peg.

And lest you think they aren't paying proper respect to Led Zeppelin, here's an endorsement from none other than Robert Plant: Elvis Herselvis is the alter ego of Leigh Crow. The Elvis Herselvis website is still under construction, and I couldn't find any clips of her band "Elvis Herselvis and the Straight White Males," but this is her other band, the Mighty Slim Pickins: 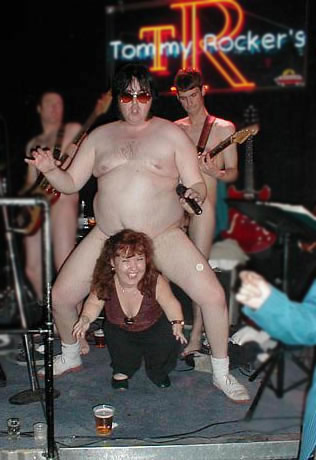 Extreme Elvis was born in the 1990's when a San Francisco-based performer thought "what if Elvis had lived? And continued to just let himself go?" The answer would horrify everyone.

I'm not going to post any videos of EE, because I don't want to scare off anyone, but if you're interested, there are plenty here. But I will warn you that none of them will be safe for work. Or home. Or prison. They are not for the easily offended, or the easily sickened. Here is a description of EE from Earpoke.com:

Extreme Elvis is possibly the greatest living Elvis tribute artist alive today. If he’s still living, that is. His site was permanently shut down years ago by the FBI and Homeland Security for copy write infringement and other heinous crimes…or was it? Reality becomes a blur. Aside from a few online interviews, a story in Gigs From Hell

and fading memories of the fascinating biography from his old site, nothing remains but a small handful of unforgettable performances which remain seared into my brain.

Apparently, the part about the FBI is true, this is what you get if you open his homepage:

Anyway, if you're interested in a good freak show, check him out, but proceed with caution. And remember the Extreme Elvis motto:

Every generation gets the Elvis they deserve.

(in the interests of full disclosure, I should mention that Extreme Elvis once felt me up at Kimo's and I'm still not completely recovered)
Posted by Professor Chaos at 4:42 PM No comments: