People and things I think are overrated. Not necessarily bad, just not as good as everyone seems to think they are.

I enjoyed There Will Be Blood as much as the next guy, but I'm pretty sure that was mostly due to Daniel Day Lewis's eccentric performance as Daniel Plainview. 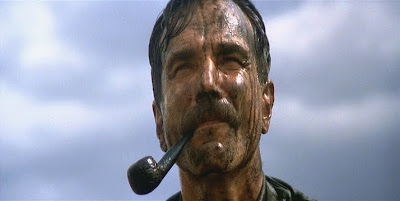 And I had a real problem with the ending. It felt like at some point someone looked at his watch and went "holy fuck, it's been that long? Wrap it up. I dunno, just kill the preacher guy, maybe?'" t's so out of the blue, since plainview clearly seems to relish the idea of keeping the kid around to watch him grovel and squirm. Killing him spoils all his fun.

Magnolia, on the other hand was the worst 7 and a half hours I have ever spent in a theater. (it felt that long) The Tom Cruise character, especially was so ridiculous. This guy is supposed to have built a successful business standing on stage yelling "respect the cock!"?
His seminar is called "Seduce and Destroy." Now, I get that there would be a big market for a guy who could teach ordinary schmucks how to seduce women, but why the destroy? Is there really a big demographic out there thinking, I'd like to be able to have sex with women, but I also want to be able to inflict some sort of emotional damage on them at the same time. If only there were a guy who could teach me. . . say, what about that creepy little guy strutting around screaming about 'respecting cocks' and 'taming c*nts?'" That's a guy from whom I'd seek guidance!
And the whole 'sins of the fathers" theme, did any one NOT find that incredibly heavy-handed? Geezuz, we got it 2 hours ago, run the fucking credits!
Boogie Nights was, of course, the film that answered the eternal question "is it possible to make a movie slap-full of sex and nakedness and still be kinda boring?" Okay, I'm not saying "boogie Nights" was a BAD movie, it was just sort of okay, but for some reason the critics treated it like the second coming of Citizen Kane, and honest to God, it just wasn't anything to write home about.

Only a gifted director could get Mark Wahlberg to act dumb as a post and Burt Reynolds to play a convincing egomaniac!

I have not seen "The Master," but everything I've heard about it seems to consist of people tying themselves in knots trying to come up with a reason to say that they loved it because it's Paul Thomas Anderson and if you're a film person you're required to love everything he does.
﻿
Posted by Professor Chaos at 6:01 PM 2 comments: Links to this post