“Those people who don’t think that Latinos will vote for a Republican need to take a look at Puerto Rico,” Romney said

Aaaaand, hold for applause. . .
Oh, good point, Mitt! When given a choice between 4 Republicans, Puerto Ricans will vote for a Republican. Wow! What a fucking insight! No wonder you're in the lead.
Posted by Professor Chaos at 8:37 PM 2 comments:

Fired for no reason? Too bad. This is Florida!

This is what can happen in a "right-to-work" "at-will" state:

By Eric Pfeiffer | The Sideshow – 5 hrs ago

In an interview with the Ft. Lauderdale Sun-Sentinel, several of the fired workers say they wore the matching colors so they would be identified as a group when heading out for a happy hour event after work. They say the executive who fired them initially accused them of wearing the matching color as a form of protest against management.

The law offices of Elizabeth R. Wellborn, P.A. offered "no comment" to Sun-Sentinel reporter Doreen Hemlock, but four ex-employees tell the paper they were simply wearing their orange shirts to celebrate "pay day" and the upcoming Friday group happy hour.
"There is no office policy against wearing orange shirts. We had no warning. We got no severance, no package, no nothing," Lou Erik Ambert told the paper. 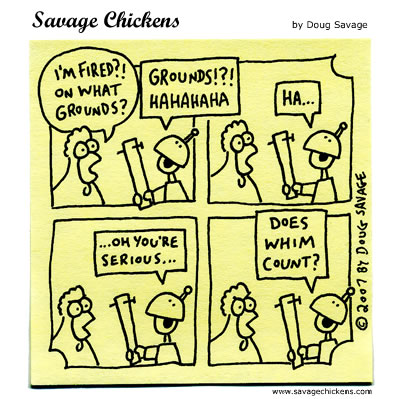 This is the model. This is what they want to roll out across the country. Busting unions, "right-to-work" laws, this is the end result. You can be fired for no reason, and you have no recourse.

After the 14 employees were fired, an executive said anyone wearing orange for an "innocent reason" should speak up. At least one employee immediately denied any involvement or knowledge of a protest and explained the happy hour color coordination. Nonetheless, they were still fired.
"I'm a single mom with four kids, and I'm out of a job just because I wore orange today," Meloney McLeod told the paper. And there's really nothing anyone can do about the terminations since Florida is an at-will state, meaning employers can fire an employee who doesn't have a contract "for a good reason, for a bad reason or even for the wrong reason, as long as it's not an unlawful reason," Eric K. Gabrielle, a labor and employment lawyer at Stearns Weaver, told the Sun-Sentinel. Gabrielle said there was no apparent violation of the law in this case.

No violation of the law. It is perfectly legal in Florida to deprive people of their livelihood if you don't like the color of their shirts. This is the future if people like the Koch brothers, the Scaifes, the Coors family, etc. get their way.
Posted by Professor Chaos at 8:07 PM 2 comments: