This is Peg Dunmire.

Peg is running against Florida Representative Alan Grayson on the Tea Party ticket.

Here she is explaining why she got into the campaign:

Um, the Democrats took the majority in 2008, but whatever. Why should a potential Congressperson be expected to follow current events, especially those that involve Congress?

Also, saying that Obama has been divisive is like saying that the squirrels are being jerks about not getting along with the dogs. And "Chicago thug?" Seriously? Have you ever seen a less thuggish person than Barack Obama?
This is what a Chicago Thug looks like: 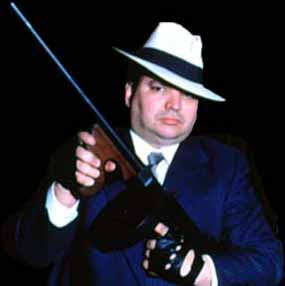 Yes, of course they were sincere. Lunatics are always sincere. The guy on the corner with the tinfoil hat sincerely believes that the CIA is putting thoughts into his brain. The Twelve Galaxies guy is entirely sincere about what he believes. I have no idea what that is. It used to be all about impeaching Bill Clinton for violating intergalactic law, but now he seems to have just gone off the deep end.

(The 12 Galaxies guy, Frank Chu, is an institution in San Francisco. From his Wikipedia page:
Frank Chu holds Bill Clinton responsible for directing the CIA to withhold payment to him for being the star of something called "The Richest Family" during the presidency of George H.W. Bush. His protests frequently called for the impeachment of Clinton even after Clinton was no longer in office. Bill Clinton, George W. Bush and current President Barack Obama are frequently accused by Chu of cooperating with the 12 Galaxies to commit crimes and treasons.)

I don't know who the hell Mattie Fein is, but she approves of this message:

My favorite part is at the end, whenre the placard reads "Approved by Mattie Fein, Parid for by Mattie Fein for Congress" She adds in parentheses (obligatry McCain-Feingold anti-free speech message) then in smaller, but still parenthetical type: (which was passed to protect multi-millionaire-career-politician incumbents) Apparently, true freedom requires that attack ads be permitted to be published anonymously? I guess?

Anyway, I haven't been able to find out much about her, but according to her website, she "has served as Communications Director for the American Freedom Agenda, an organization devoted to restoring checks and balances and protections against government abuses."

Unfortunately, their website seems to no longer be in existence, but an article about the group from 2008 state that they favor:

renouncing the use of presidential signing statements to claim a right to disobey laws; ending threats to prosecute journalists who write about classified matters; and promising to use regular courts rather than military commissions to try terrorism suspects. The full pledge is posted on the group's website, AmericanFreedomAgenda.org. [don't bother clicking]

which sounds not crazy at all.
But come on, that was one crazy ad!
Posted by Professor Chaos at 4:29 PM No comments: Links to this post