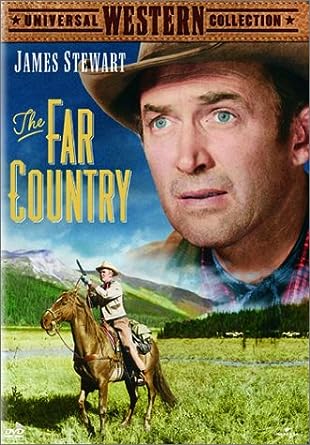 I hadn't ever heard of this movie until a couple days ago when I saw that Encore was running a "six-gun salute" to Jimmy Stewart. Jimmy Stewart being one of my favorite actors, I set the DVR to record it.

It's not he greatest western ever made, but it's not bad. But what struck me about this movie is that I'm fairly sure that, 50-some years before "Brokeback Mountain," this movie featured a couple of gay cowboys.

Jimmy Stewart and Walter Brennan speak often about their plans to buy a little house in Utah and "settle down" together.  Stewart's character has a bell on his saddle that Brennan's character bought for him, planning to hang it on the door of their house to let them know when visitors arrive. "It's a pretty small bell" says Renee (One of two women in love with Stewart) "Well, it's gonna be a pretty small house." answers Brennan.
At the end of the movie, when Renee leans in to kiss Jimmy Stewart, and the music swells dramatically, Stewart turns away, walks over to his horse and wistfully fiddles with the bell given to him by the now-dead Walter Brennan. He's clearly heartbroken and not at all interested in making kissy-face with Renee, or with Ruth Roman, from whom he also walked away when she tried to kiss him. That's right. THIS did not impress him!

Plus, three times in the movie, Jimmy Stewart reaches into Walter Brennan's pocket, pull out his pipe, puts it in Brennan's mouth and lights it for him. It's a very loving gesture, especially when, as he is doing this, he says to Brennan "I can take care of me. And in a pinch, I can take care of you, too."

It's much more romantic than it looks in this picture.

The screenplay was written by Borden Chase and the film was directed by Anthony Mann. I can't find a whole lot of biographical information on either of them, so I don't know if either or both were gay or not, not that that would necessarily matter, I mean, I don't think Ang Lee is gay either.

Anyway, if anyone has seen The Far Country, I'd love to know what you think. Were Stewart and Brennan acouple, or am I just reading too much into their friendship? Because if I'm right, this film would be pretty groundbreaking and it's definitely not getting any credit for it.
Posted by Professor Chaos at 8:51 PM 3 comments: Links to this post